Sampling methods have the potential to affect archaeological investigations at every stage of the research process, impacting on the type of material recovered, the quality of the data recorded, and the subsequent interpretations of sites and assemblages (Orton 2000:1).  Sampling is often employed in the study of faunal remains, where researchers frequently encounter vast amounts of material.  While a plethora of literature exists concerning the effects that these sampling methods potentially have on the recovery and interpretation of vertebrate remains (see for example Grayson 1981, 1984:116–167; Lyman 2008:141–171), relatively little research exists about the influence of these practices on the other major contributor to faunal assemblages, molluscs.

Shell deposits are ubiquitous worldwide and are important sources of information for the reconstruction of subsistence patterns and social practices of past groups (Hiscock 1997; Szabó 2009), as well as providing key pieces of information regarding past environmental conditions (Faulkner 2011).  One of the most commonly occurring types of shell deposits are shell middens, a site type which is frequently found across Australia.

Current midden sampling practices are largely based on those developed by the California School during the first half of the twentieth century and frequently utilise small (often less than 25% of excavated material) sample sizes.  Previous studies on the effects of sampling practices, however, have highlighted the possibility for there to be substantial impacts on the recovery and subsequent interpretation of archaeological assemblages, with small sample sizes potentially resulting in the loss of significant portions of information (e.g. Grayson 1984:131–167; Kirch et al. 1987:126; Langley et al. 2011).  It was therefore apparent that there was a need to critically analyse the current midden sampling methods being used.  My research aimed to address this gap in the literature and sought to establish the effects that current sampling practices have on the recovery and interpretation of molluscan remains from archaeological sites.

To assess the effects of sample sizes on molluscan remains I examined two different sample sizes—20% samples and 100% samples—using material from the Peel Island Lazaret Midden as a case study (Ross and Tomkins 2011).  To quantitatively examine the impacts of small samples I applied six commonly used ecological measure of diversity to the two sample sizes, derived from seven excavation units in the upper portion of the Peel Island Lazaret Midden deposit: Simpson’s Index; Simpson’s Index of Diversity; the Shannon-Weiner Index of Diversity; the Shannon Index of Evenness; Rarefaction; and Number of Taxa.  These measures allowed me to examine the impacts that sampling had on an assemblage’s overall species richness, that is the number of taxa present, and the abundance distribution of these taxa, or how evenly these taxa are spread throughout the assemblage. 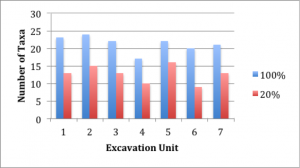 Figure 1 Graph of the Number of Taxa results for the 20% and 100% samples by excavation unit.

The results of these diversity indices showed that sample size does have a significant impact on the recovery and interpretation of molluscan remains.  The use of small sample sizes resulted in a drastic loss of taxa richness with up to 50% of the taxa present in the assemblage not being represented in the 20% sample, and resulting in an underrepresentation of the taxonomic diversity of the population (Figure 1).  In addition to this, the use of small sample sizes were shown to considerably affect the abundance distribution of the taxa within the analysed population, with smaller sample sizes creating the false impression that the taxa were more evenly distributed across excavation units than they actually were (Figure 2). Both these results have important implications for researchers studying midden assemblages, as they demonstrate that the use of small samples sizes can effectively conceal the compositional differences within and between assemblages, ultimately influencing the interpretations of these types of sites. 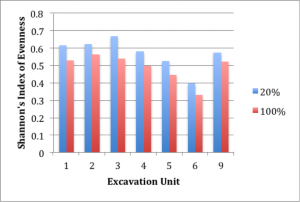 Overall my research showed the need to carefully consider the size of one’s samples when analysing molluscan material from archaeological sites.  This is important if we are to produce the most comprehensive understandings of the past uses of these sites and the environmental conditions during the period of site formation.

As my research topic was an issue that is commonly encountered in consulting archaeology, I was encouraged by my supervisors to apply for the AACAI student support fund.  The money from the student support fund was incredibly beneficial, allowing me access to reference materials that otherwise would not have been available to me.  Perhaps the most welcome benefit of the funding, however, was its ability to allow me to take leave from work to focus on my thesis in the weeks leading up to its submission.  In this way the funding alleviated some of the financial stress of honours, allowing me to instead transfer this stress to my thesis.  Overall, the AACAI student support fund was very much appreciated during my honours year, and I strongly encourage students to consider applying for the fund to assist them in their research.

Post-thesis submission I have been fortunate enough to have the opportunity to present my honours research at the 2013 AAA conference in Coffs Harbour, where I was able to meet and listen to many other researchers working on similar issues.  In addition to this I have been aiding the University of Queensland’s Archaeological Sciences Lab in setting up their online shell reference database and I am hoping to pursue a PhD in the not-too-distant future.

Grayson, D.K. 1981 The effects of sample size on some derived measures in vertebrate faunal analysis. Journal of Archaeological Science 8:77–88.

Langley, M.C., C. Clarkson and S. Ulm 2011 From small holes to grand narratives: The impact of taphonomy and sample size on the modernity debate in Australia and New Guinea. Journal of Human Evolution 61:197–208.