Is this the world’s oldest rock art? 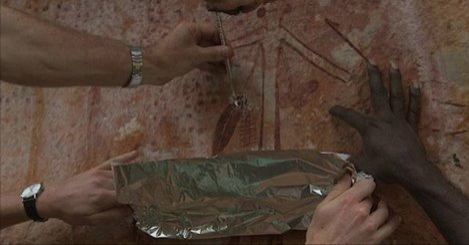 Archaeologists and Aboriginal elders are hoping the most comprehensive study of rock art done in the Kimberley region will confirm the images to be among the oldest made by humans anywhere in the world. Watch Peter Veth, Scotty and Augustine Unhango, Andy Gleadow and Helen Green discuss what they consider may be among the oldest art made by humans on ABC’s 7.30 Report with Leigh Sales.

LEIGH SALES, PRESENTER: Archaeologists have embarked on one of the most ambitious rock art dating projects ever undertaken in Australia. They’ve been camped out in the remote Kimberley, using new techniques to establish when and how some haunting images were made. As Erin Parke reports, they suspect the artwork may have been created by some of the earliest waves of people to arrive on the Australian continent.

ERIN PARKE, REPORTER: It’s some of the most spectacular country in Australia, the Northern Kimberley. The Dambimangari and Balanggarra people have lived here for tens of thousands of years and have left their marks on cave walls and cliffs across the land. But these ancient images are not just works of art. They provide profound historical clues to when Aboriginal people first arrived on the Australian continent.

PETER VETH, UNI. OF WESTERN AUSTRALIA: There are probably no reliable dates for that anywhere and yet here is one of the largest rock art galleries, probably the earliest concentration of figurative art anywhere in the world. And we’re literally on the cusp now of dating it properly with all these different techniques for the first time, so it’s incredibly exciting. It’s a bit of a cyclonic event.

ERIN PARKE: A team of archaeologists and geologists, led by the University of Melbourne, is on a mission to unlock the secrets of when these paintings were created.

PETER VETH: We’ve got the team that are using a whole basket of different techniques and that will, by definition, revolutionise the way we date rock art, it will produce new chronologies and we expect some of those dates to be old. Some of them may be extremely old.

ERIN PARKE: Each day starts early to beat the midday heat. Base camp is 500 kilometres from the nearest town. With gorges, snakes and crocodiles common in the area, there is always an element of risk.

It’s an awe-inspiring spot for the young Balanggarra rangers, descendants of those who originally made these striking images.

SCOTTY UNHANGO, RANGER: I find it a lot interesting. Probably be the wise men and the ones who get the song land for it, powerful men. It’s the great leader that put these paintings on this wall.

AUGUSTINE UNHANGO, BALANGGARRA ELDER: It’s good to be teaching our kids about the sacred place and the rock art and to keep track of our sacred site.

ERIN PARKE: There have only ever been a handful of attempts made to date Kimberley rock art and most of the results have been vague or disputed. This expedition is targeting sites known to be particularly old, where archaeological digs have proven human occupation dating back 50,000 years.

ANDY GLEADOW, GEOCHRONOLOGIST, UNI. OF MELBOURNE: The longer we look at it, the more we start looking on a small scale, and with a lot of pairs of eyes, we start to see here’s a place where there’s something we can date that has a relationship to art and there’s another place that we can do it. And gradually we build up a picture and over a matter of a few hours, usually, at some of these sites, we come up with a whole series of things that we can take tiny little pieces of and we can take them back to the lab, measure the ages and then we are starting to build up a time framework that relates to the art.

HELEN GREEN, UNI. OF MELBOURNE, GEOCHEMIST: And we can see there’s some pigment squiggles here and the crust is forming over the top of this. So we can use a very small chisel just to chip off a little piece of this and that will let us know that the art that’s underneath that has got to be older than the age we get for that crust.

ERIN PARKE: It’s painstaking work, as each image is fragile and irreplaceable.

Each day, the scientists collect dozens of tiny samples.

By night, they’re recorded and stored away, ready to be analysed back in the laboratory.

3,000 kilometres away at the University of Melbourne, each sample undergoes several different dating processes.

HELEN GREEN: It’s a really exciting time for us. I think we got over 100 for that week-long trip. The samples that had really high potential seem to be really thick and internally layered and since we’ve got back and had a look at these under a microscope and had a look at these on the laser, we can see that there are really consistent layers.

ERIN PARKE: It’ll be several months before the first results come in, but hopes are running high that Northern Kimberley rock paintings could prove to be the oldest recorded on the Australian continent.

PETER VETH: We believe that some of this art will be as old, if not older, than that art in Europe. And that makes the Kimberley and all of its art and the cultural connections to it, the living connections of world significance. This is an incredible asset that must be looked after and managed properly.