‘We’ve got better things to do than worry about whitefella politics’: Contemporary Indigenous graffiti and recent government interventions in Jawoyn Country 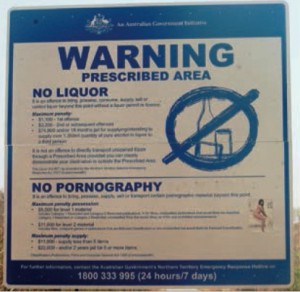 Graffiti in the NT (published in Australian Archaeology 78).

This paper explores whether Aboriginal people have used graffiti to display resistance to the Northern Territory National Emergency Response Act 2007. One of the first studies of graffiti in a remote Aboriginal community, this research was undertaken on Jawoyn lands in the Northern Territory, Australia. It encompasses the Aboriginal communities of Barunga, Manyallaluk and Beswick, where graffiti was recorded at 277 road signs along the Central Arnhem Highway and Manyallaluk Road, and at three roadside shelters. This study shows that graffiti in Jawoyn communities primarily serves the intragroup purpose of reinforcing relationships between community members, in contrast to the use of graffiti by non-Indigenous people to propagate political and social messages between different social groups. It also provides material insights into a fear of government. Contrary to our expectations, graffiti in Jawoyn Country is not a mode of resistance to government intervention. Instead, the near absence of graffiti on Northern Territory Emergency Response signs in areas where surrounding signs have high densities of graffiti provides unique and materially-based insights into a fear of the Australian government that is felt by Aboriginal people in remote communities. The analysis suggests that Aboriginal people nurture community relationships partly to deal with alienation from government and, to some extent, the wider Australian community.

Ralph, J. and C. Smith
‘We’ve got better things to do than worry about whitefella politics’: Contemporary Indigenous graffiti and recent government interventions in Jawoyn Country
June 2014
78
x–x
Short Report
You must be a member to download the attachment ( Login / Sign up )