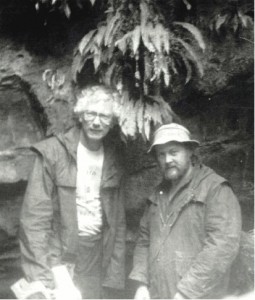 Thomas William Haydon died on 6 July 1991 of cancer of the lymph system, aged 53. Many readers of AA will have remembered Tom in apparently vital good health at the Fourteenth Indo-Pacific Prehistory Association meeting in Yogyakarta, Java in August 1990, when he presented a paper describing his recent experiences with the Agta forest-dwelling hunting and gathering peoples of northeastern Luzon. He described how they had recently been dislocated from their prime coastal estates by an unholy alliance of the self-styled New People’s Army, a plywood company and land-hungry subsistence farmers. He saw the process as yet another, perhaps close to final, episode in the destruction of indigenous hunting and gathering societies within the Southeast Asian-Australian regions through the intrusive processes of colonialism and more recently, what might be termed ‘modernisation’. The paper, with a tilt of the hat to Sandra Bowdler. was called ‘Coastal de-colonisation’ and evoked images drawn from the Tasmania of the 1830s to the Philippines of today. Yet Tom, with his instinctive grasp of prehistory allied with an artistic freedom of thought, also felt that what he had observed had deeper historical cadences, with reflections back to the Pleistocene. In a bar down the street from our hotel, over some excellent Dutch-style Bintang beer and hot Sumatran side dishes, he expounded excitedly, hands waving in the air, on some vivid impressions he had had seeing for the first time in the bush, an Agta camp occupying a semi-circular shelter of light timber which had been thatched with palm fronds. ‘They looked like Melanesians’ he said, ‘in my imagination I was carried back to an earlier time’ (Rhys Jones’ journal entry: 29 August 1990).

EVENT CALENDAR 3 May 2021
No Events
view all