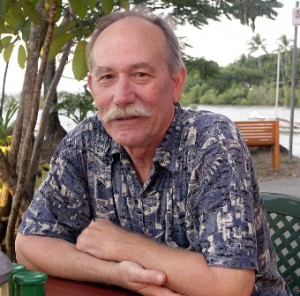 On 19 August 2006, some 65 people from Australia and overseas attended a special symposium ‘Archaeological Science under a Microscope’ at the University of Queensland (UQ), to honour Dr Tom Loy, who was found dead at his home in Fig Tree Pocket, Brisbane, on Wednesday 19 October 2005. He had been suffering a debilitating illness for some time. This gathering of past students, colleagues and friends paid tribute to Tom’s influence as a teacher, most recently at UQ where he taught for 10 years, and also to his research contributions, particularly the study of tool residues and ancient DNA analysis, which earned him international recognition.

Thomas Harold Loy was born on St Valentine’s Day 1942, in Chino, California, the first son of a third-generation Methodist minister, Harold Loy and his wife Maxine, a musician and schoolteacher. In his early years, Tom spent much time in the desert among the Navajo, who stimulated his interest in prehistoric archaeology and deeply influenced his thinking. When he was five, he started a rock collection and by the age of 10 he was reading anthropology and archaeology books, but he especially loved being outside in the desert and wilderness.

In 1960 Tom began a geology degree at the University of Redlands, California, which was interrupted in 1963 when he married his high school sweetheart, Linda Anderson. They moved to Alaska, where Tom was employed as a seismologist, cartographer and consultant geologist. In his spare time, Tom surveyed and recorded archaeological sites. The marriage did not last. He married again in 1966, and with his new wife Coral moved to Vancouver, Canada. Having taken additional coursework in anthropology and archaeology at Alaska Methodist University, he was awarded a BSc degree in geology by the University of Redlands in 1970. He immediately commenced postgraduate studies in archaeology at the University of British Columbia, and was awarded an MA in 1972. Tom and Coral had two children, Ingelisa and Adam, and adopted two others, Curtis (Native American) and Kim (Korean).

In 1972 Tom gained employment as Research Director of the Glenrose Cannery Site Project which was funded by the National Museum of Man and the Canada Council and administered by the University of British Columbia. He was also employed as an Instructor at the University of British Columbia’s Archaeological Field School in the summer of 1973, by which time he had begun a PhD, the completion of which was curtailed by the demands of employment.

From 1973 until 1987 Tom was a curator of archaeological collections at the Royal British Columbia Museum, Victoria, Canada. He became the first editor of the Canadian Archaeological Association’s Newsletter in 1981. As well as developing and implementing a computerised collections management system for the National Museums of Canada, Tom conducted archaeological and ethnographic fieldwork in north-central British Colombia. It was while analysing these collections that he discovered the existence of prehistoric blood residues on well-preserved stone artefacts from arctic sediments. Tom noticed that certain residues adhered to some museum stone tools that had not undergone the standard washing and cataloging procedures, and having recognised residues during his own butchering experiments, he questioned whether the museum tool residues could be from such tasks in prehistory. Examining some of the unwashed tools microscopically, he took photomicrographs of the residues and identified matted hair and ancient blood in sufficient quantities for radiocarbon dating.

Tom is thus internationally renowned as the first researcher to discover the ubiquity and longevity of blood and other organic residues on ancient artefacts. His groundbreaking 1983 article ‘Prehistoric blood residues: Detection on tool surfaces and identification of species of origin’, in the journal Science, caused a stir in the archaeological community and not a little controversy. It also resulted in a reference to the ‘Loy Method’ in the bestselling novel, Jurassic Park, by Michael Crichton! Subsequent papers focused on understanding the mechanisms of survival and the taxonomic identification of blood and other organic residues on tools from other environments and in other archaeological contexts, including rock art. Tom’s pioneering discoveries prompted intense scientific scrutiny, at times hurtful, but he worked tirelessly to revise and develop new methods for testing and evaluating his fundamental argument that identifiable blood and other organic residues often survived intact on tool edges, could be taxonomically identified and could provide critical evidence of how tools were used.

Tom’s move from Canada to Australia began when a group of Australians (including Dr Jim Allen, and a couple of stone tool analysts, Dr Richard Fullagar and Dr Johan Kamminga) heard him speak at the 1983 International Congress for Archaeological and Ethnological Sciences (ICAES) in Vancouver. Jim Allen elicited an invitation for Tom to visit Australia and speak about his discoveries of ancient blood at the Research School of Pacific Studies at the Australian National University (ANU). After a couple of short visiting fellowships, he was offered a three year position in 1987. Professor Jack Golson, then Head of the Department of Prehistory, and Dr Rhys Jones, vigorously supported Tom after a New York Times article publicised his dismissal from the Royal British Columbia Museum because his research had been questioned. Jack Golson told the Canberra Times (2 January 1988, p.10) that this was simply untrue, and that ‘Loy was the first person to say blood was on those stones … The reason we snapped him up here … was to give him opportunity and the facilities for the research and development of that fantastic breakthrough’. He moved to Canberra with his third wife Claudia Haagan, with whom he had two children, Max (born in Canada) and Emma (born in Australia). Tom was promoted to Research Fellow in 1991 and then Fellow in 1993. In 1996, Tom was awarded a PhD by the Institute of Advanced Studies, ANU.

Tom was extremely upset by attacks in the media and the scientific controversies that his research provoked, but found good friends and collegial support at the ANU. In his new laboratory, he set about building reference collections, developing new methods of residue identification, and began intensive investigation of ancient DNA extraction. His numerous publications from this period show that this work developed rapidly, and he collaborated widely with archaeological colleagues, dating experts, geneticists and other specialists at the ANU and in many parts of the world. His work with colleagues gave him opportunities to study countless artefacts from around the world, and he visited archaeological sites in many parts of Australia. His research on ancient starch granules deserves special mention; his landmark publication (with Professor Matthew Spriggs and Dr Steve Wickler) in the journal Antiquity (1992) identified taro starch grains on 28,000 year old stone tools from Kilu Cave, Solomon Islands. Tom’s most recent contribution with Jenna Lamb, one of his BA (Hons) students, in the Journal of Archaeological Science (2005) promises a new method for distinguishing prehistoric cooking and the processing of starchy plant foods. Ancient Starch Research, a volume edited by Dr Robin Torrence and Dr Huw Barton, and published shortly after Tom’s death, was dedicated to him because of his significant contribution to research in this area.

Although most of his research involved traces of blood and starch, he was interested in all aspects of artefact production and use, and initiated study of several other organic and inorganic tool residues (usually with highly distinctive shapes and optical properties) like haematite, collagen fibres, raphides (calcium oxalate crystals found in many plants) and feather barbules. Subsequently, one of Tom’s most recent PhD graduates, Dr Gail Robertson, found, for the first time, abundant feather fragments on Australian backed microliths.

In 1995, Dr Ken Reid, a former ANU science colleague who had taken a position at the University of Queenland’s Special Research Centre in the Centre for Molecular and Cellular Biology (CMCB), approached his director about offering Tom a position. As the CMCB was only able to fund a 50% position, the Department of Anthropology and Sociology (now the School of Social Science) at the urging of Dr Jay Hall readily agreed to fund the other half, and Tom was thus lured to a 3 year cross-faculty appointment as a Principal Research Fellow at the CMCB and Lecturer in Archaeology at the University of Queensland. Here he began development of the current Archaeological Sciences Laboratory. Tom’s ability in the teaching sphere was unknown, but any concerns were dispelled when he gave a guest lecture on his Ice Man work to the introductory Discovering Archaeology class. Tom strolled into the large lecture theatre in Cuban-heeled cowboy boots, faded Levis, a Western belt buckle, Hawaiian-style shirt, and no notes. Armed with a full rack of 35mm slides he spoke in his quiet western drawl for over an hour to a spellbound audience of 150 first year students. He received a standing ovation!

Tom was a naturally gifted teacher and a great storyteller and was extremely successful at attracting students into undergraduate and postgraduate courses. His use of examples gleaned from his experiences as a geologist and archaeologist made the scientific method accessible to students who were largely from the Humanities, although eventually numbers of Science students enrolled in his various subjects (particularly Molecular and Forensic Archaeology). When his three year contract expired and the CMCB could no longer provide funding, the School of Social Science stepped in to fully fund the position until 1999, at which time Tom was appointed to a Senior Lectureship dedicated to developing Archaeological Science in the Archaeology Program. Over the years, Tom supervised a large group of PhD, Masters and Honours students with diverse interests. At the time of his death, he held a current Australian Research Council Linkage Grant, ‘Rehabilitation of Surface Collections’, which maintained ongoing fieldwork and collaboration with Indjilandji and Dugalunji Aboriginal peoples from the Camooweal area in western Queensland.

Other ongoing projects included the study of the clothes and toolkit of Ötzi, the famous glacier mummy found in 1991. With an international team, Tom visited Ötzi in Austria and Italy, and most recently was analysing DNA preserved in blood films that he found on Ötzi’s tools and clothing. Sadly, his monograph on this work remains unfinished. He set up ancient DNA and other analytical facilities for archaeologists in the University of Queensland, with the support and backing of Dr Ken Reid, from the CMCB. He convened the 7th International Ancient DNA and Associated Biomolecules Conference at UQ in 2004, and was Foundation President of the newly formed International Society for Ancient Biomolecules. Tom also forged links with Lyn Wadley and worked closely with students at the University of Wittwatersrand and other research teams in South Africa, where he worked on human remains, stone artefacts and bone assemblages spanning the last 2 million years.

Tom’s research often included projects with a high international profile that invited controversy (e.g. faunal extinctions, human evolution, plant food processing and direct dating of rock art) but he always made time for his many ardent students to whom he was both mentor and friend. He was an excellent cook and often produced his favourite spicy dishes for family and students. Tom was also a talented poet, musician and artist, finding relaxation in making exquisite woodcuts. His vibrant presence is sadly missed by his friends, students and colleagues the world over, and especially by his family, his only brother, Gareth, and his children: Inge, Curtis, Kim, Adam, Max and Emma.

Loy, T.H. 1993 The artefact as site: An example of the biomolecular analysis of organic residues on prehistoric tools. World Archaeology 25(1):44–62.

Loy, T.H. 1993 Prehistoric organic residue analysis: The future meets the past. In M. Spriggs, D.E. Yen, W. Ambrose, R. Jones, A. Thorne and A. Andrews (eds), A Community of Culture: The People and Prehistory of the Pacific, pp.56–72. Occasional Papers in Prehistory 21. Canberra: Department of Prehistory, Research School of Pacific Studies, The Australian National University.

Wolski, N. and T.H. Loy 1999 On the invisibility of contact: Residue analyses on Aboriginal glass artefacts from western Victoria. The Artefact 22:65–73