Thesis abstract ‘A Chance Missed? An Archaeological Interpretation of the Mining Operations of the Government Coal Mine at Plunkett Point, Tasman Peninsula, Tasmania’ 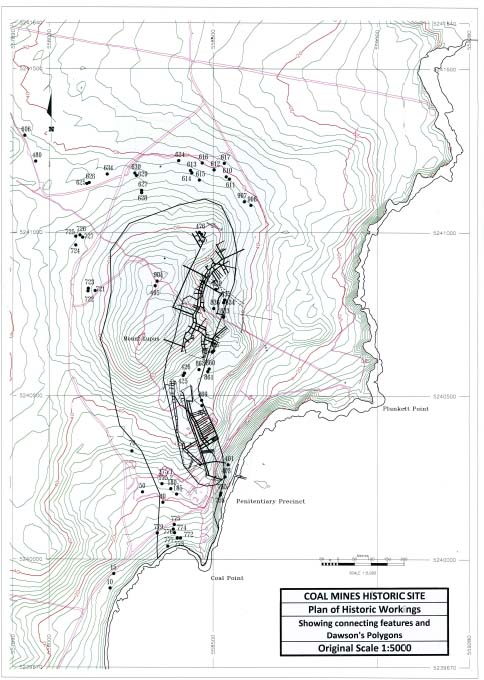 The Plunkett Point coal mine on the Tasman Peninsula was a unique mining enterprise in Australia’s history. Between 1833 and 1848 the mine was operated by convicts and it was the only mine in Australia located within the physical and administrative confines of a penal institution. During that time it produced up to 100,000 tons of coal for consumption in Hobart Town and Launceston, displacing the more expensive coal previously imported from New South Wales. But in 1848 the British government abandoned its operation of the Plunkett Point mine, labelling it a commercial failure. Historians have blamed the failure on poor administration, implying that with better management and mechanisation it may have been successful. This thesis investigates an alternative hypothesis: that the failure of the mine was due primarily to the adverse geology of the coal deposit.

The aim of this thesis was to analyse the influence of the underground mining conditions on the performance of the mine. A synthesis of the mining operation and sequence of development was compiled by combining the remaining historic plans of the Plunkett Point mine with the surface archaeology and data from the historical documentary record. Informed by the author’s knowledge of mining principles, a three-dimensional computer model of the coal seam was developed and the geological and mining conditions inferred. This provided a new perspective on the question of why the mine exhibited poor operating performance during the period of government control.

The study identified that the geological conditions at the mine were poor, and would have constrained the level of production and the life of the mine, despite competent management and use of the types of mechanisation that were available at that time. The results suggest that, although the performance of the mine was affected by the deficiencies in management and availability of resources, such as skilled labour and capital, ultimately the coal deposit was not capable of sustaining the desired production rate of 10,000 tons per annum. This thesis demonstrates the value of applying a multidisciplinary approach to archaeological questions, in this case utilising specialist technical knowledge of mining to inform the interpretation of the mining archaeology and historical records.