The way it changes like the shoreline and the sea: The archaeology of the Sandalwood River, Mornington Island, southeast Gulf of Carpentaria, Australia 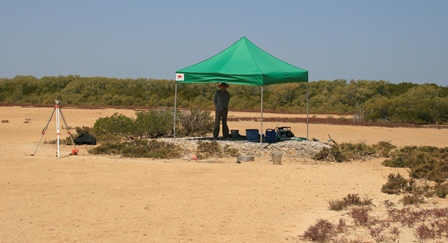 PhD, School of Architecture, The University of Queensland, June 2012

Defining and understanding change as observed in the mid- to late Holocene Australian archaeological record is the primary focus of this research. For this thesis I conducted a detailed local archaeological survey of a mid- to late Holocene landscape to examine aspects of continuity and change in the coastal environments of the Sandalwood River in the Yiinkan Embayment, Mornington Island, southeast Gulf of Carpentaria. Focus is given to the theoretical and methodological problems emerging in coastal and island archaeology such as the importance of constructing reliable chronologies, interpreting the archaeological data in the context of local landscape and environmental development, and assessing the integrity of open tropical archaeological coastal sites.

The Yiinkan Embayment is an ideal region to address these issues as it contains datasets that enable the development of refined local chronologies of land formation processes and palaeoenvironmental conditions. These datasets included numerous fixed biological indicators in the form of black-lipped oyster (Striostrea mytiloides) bioherms (death assembages) that are used to construct local sea-level models and infer palaeoenvironmental conditions. In addition, a series of transgressive parallel beach ridges that have a deposition chronology mirroring that documented on the adjacent mainland have been used to reconstruct palaeocoastlines and further refine the timing of local mid- to late Holocene landform evolution.

Results of the survey and excavation of three shell mounds are presented. Differences in site structure, composition and chronology are interpreted to present a temporal and spatial pattern of variability in the use of a range of local environmental zones throughout the late Holocene.

Reanalysis of excavation materials from the site of Wurdukanhan excavated in 1996 coupled with an extensive survey and dating program undertaken here demonstrate that there is no evidence for a mid-Holocene occupation of Mornington Island (Memmott et al. 2006). These claims are significant, as evidence for mid-Holocene occupation of islands in northern Australia has been refuted (Sim and Wallis 2008). Results clearly demonstrate that Wurdukanhan is a natural black-lipped oyster (S. mytiloides) bioherm.

Radiocarbon determinations, stratigraphy, particle size anaysis, foraminiferal analysis, magnetic susceptibility and conjoin analysis are used to evaluate the integrity of the shell mound deposits excavated for this project. Magnetic susceptibility is tested for the first time on an Australian open coastal shell matrix site to establish patterns of site use and stratigraphic integrity. All analyses combined demonstrate a high level of vertical and horizontal integrity.

Using data from the shell mound excavations and the terminal chronology from 18 other cultural deposits, along with seven dated natural features, including black-lipped oyster bioherms, this research demonstrates that human occupation of the Sandalwood River catchment commenced in the late Holocene after almost a millennia of large-scale landscape development closely linked to the final stages of the marine transgression. A model of local landscape development and human-environment interaction is presented.

Memmott, P., N. Evans, R. Robins and I. Lilley 2006 Understanding isolation and change in island human populations through a study of Indigenous cultural patterns in the Gulf of Carpentaria. Transactions of the Royal Society of South Australia 130(1):29–47.

Daniel Rosendahl
The way it changes like the shoreline and the sea: The archaeology of the Sandalwood River, Mornington Island, Southeast Gulf of Carpentaria, Australia
June 2013
76
100
Thesis Abstracts
You must be a member to download the attachment ( Login / Sign up )