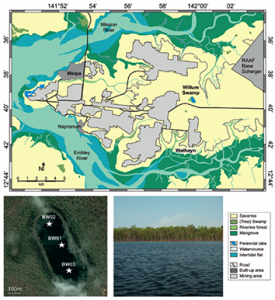 The environmental history of Big Willum (Waandriipayn) Swamp and the surrounding landscape is reconstructed for the last 8000 years through the analysis of pollen, charcoal and mineral magnetics. The data provide a Holocene record of vegetation and fire in an area where few records exist. Swamp initiation at Big Willum began prior to 8000 cal. BP, with swamp-like conditions maintained until 2200 cal. BP, after which it became a permanent deep water body, reaching its present day extent between 600–400 cal. BP. From 7000–1200 cal. BP the surrounding woodland was essentially stable. Fire is present throughout the record, with only one period of pronounced burning outside of the historic period, at around 1000 cal. BP, leading to a slightly more open understorey/woodland. The hydrological change at 2200 cal. BP that led to Big Willum becoming a more permanent water body overlaps with the end of the most intensive period of shell mound formation and the commencement of earth mound building at nearby Wathayn. This is suggestive that change in, or diversification of, mound types may in part be linked to environmental transformations in the late Holocene. One possibility is that greater water security allowed for increasing and more permanent exploitation of inland locations.

Stevenson, J., S. Brockwell, C. Rowe, U. Proske and J. Shiner
The palaeoenvironmental history of Big Willum Swamp, Weipa: An environmental context for the archaeological record
June 2015
80
17-31
Article
You must be a member to download the attachment ( Login / Sign up )