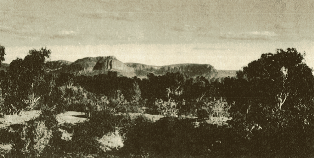 In 1988, one of us (BD) visited Ngarrabullgan (Mt Mulligan) for the first time (Figures 1 and 2). The then lessee of the mountain, Mr Reg Adams, was a particularly conscientious grazier, with family members subscribers of the World Wildlife Fund, keen advocates for the protection of cultural heritage places, and firm believers that the cattle property containing Ngarrabullgan (Kondaparinga Station) should be returned to its rightful owners, the Kuku Djungan Aboriginal people.

Within four years of this initial visit, Kondaparinga Station was for sale. Despite a higher bid by a Japanese firm (who had already made plans for a tourist resort on the mountain), an 1lth hour deal between the recently formed Kuku Djungan Aboriginal Corporation and the Queensland Department of Environment and Heritage secured the mountain and surrounding areas for the traditional owners (via ATSIC funding—the history of this deal will be recounted elsewhere). Suffice it to say here that this tum of events had a major outcome for archaeological practice in the region, for during our first archaeological field visit to the area, one of us (BD) was directed to Ngarrabullgan Cave by Kuku Djungan Elder, Mr John Grainer Snr (also Chairperson of both the Kuku Djungan Aboriginal Corporation and the North Queensland Aboriginal Land Council). The ensuing excavation soon revealed one of the oldest radiocarbon dated Aboriginal sites in Australia, with a conventional radiocarbon date of >37,170 BP (David 1993).

David, B. and colleagues
The Ngarrabullgan Homeland Project: Current research in Kuku Djungan country, north Queensland
December 1996
43
32–36
Article
You must be a member to download the attachment ( Login / Sign up )