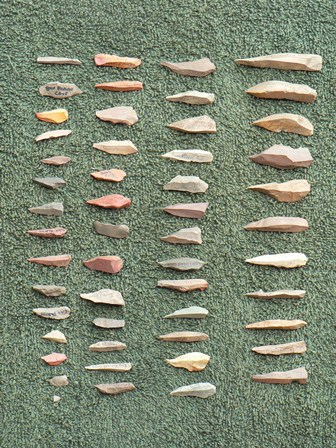 Artefacts recovered from the first excavation of Lapstone Creek rockshelter, from the B.L. Hornshaw Collection (published in Australian Archaeology 65:40).

This paper revisits the archaeology undertaken at the Lapstone Creek Rockshelter in 1935–1936 which was to become a landmark for Aboriginal Australian archaeology. In so doing it highlights and seeks to clarify errors and anomalies disseminated in the published literature relating to this shelter’s excavation. It brings to light previously unknown material in the form of artefacts, field notes and documented photographs obtained during the excavation of the shelter, including archaeological evidence of shelter use after European settlement. The paper provides evidence of the keen interest in Aboriginal art, culture and artefacts pursued by some professional and non-professional archaeologists in the Sydney region in the 1920s and 1930s, revealing the networks connecting them and describing their involvement in the rockshelter’s two excavation endeavours. Those involved were Bernard Hornshaw, George Bunyan, Clifton Towle, L.H. Preston and Frederick McCarthy.

Raymond C. Nelson
The Lapstone Creek Rockshelter: The story continued
December 2007
65
37-43
Article
You must be a member to download the attachment ( Login / Sign up )