The languages of the Tasmanians and their relation to the peopling of Australia: Sensible and wild theories 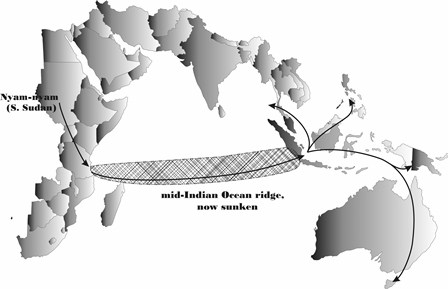 Migration route of Negroes out of Africa, across the mid-Indian Ocean ridge (published in Australian Archaeology 67:15).

The languages of the Indigenous peoples of Tasmania became extinct in the late nineteenth century and only very fragmentary records remain. What is known about the languages and the conclusions of mainstream linguists are briefly described. As a consequence of the difficulties in interpreting this material, hypotheses concerning the classification of the languages have been the focus of a variety of theories linked to the peopling of Tasmania, some of which are best described as highly speculative. The paper reviews a selection of these theories and the controversies concerning them. It focuses particularly on a new version of Joseph Greenberg’s ‘Indo-Pacific’ theory and the problematic nature of such publications, as well as claims that the ‘true’ history of Negrito peoples has been air-brushed from the record as a consequence of political correctness.

Roger Blench
The languages of the Tasmanians and their relation to the peopling of Australia: Sensible and wild theories
December 2008
67
13-18
Article
You must be a member to download the attachment ( Login / Sign up )