The feasibility of using charcoal from Devil’s Lair, south-west Australia, to access human responses to vegetation changes at the Late Pleistocene-Holocene boundary 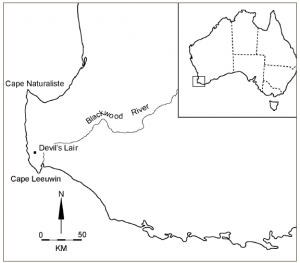 Australia’s southwest and the location of Devils Lair (published in Australian Archaeology 59:62).

Using identified wood charcoal to determine vegetation change and its effects on humans in pre-historic and historical times is not a new technique here in Australia (Hall 1984; Smith et al. 1995), or elsewhere (Prior and Price Williams 1985; Neumann 1989; February 1994; February et al. 1995; Figueira 1995). However, Australia’s high endemic vegetation regimes suggest that great variation exists among plant types with the potential to affect charcoal preservation and its use as a palaeoenvironmental indicator. Because of temperate southwest Australia’s encirclement by desert and ocean, it has become isolated from the rest of Australia causing the region’s flora and fauna to develop species endemism ranging between 68% and 85% which is exceptionally high by world standards (Beard 1981). The question of charcoal’s suitability as a method of reconstructing palaeovegetation from this region of Australia was examined as part of an Honours thesis, the results of which are presented here.

Burke, S.
The feasibility of using charcoal from Devil’s Lair, south-west Australia, to access human responses to vegetation changes at the Late Pleistocene-Holocene boundary
2004
59
62–63
Short Report
You must be a member to download the attachment ( Login / Sign up )