The Faroes grindradráp or pilot whale hunt: the importance of its ‘traditional’ status in debates with conservationists 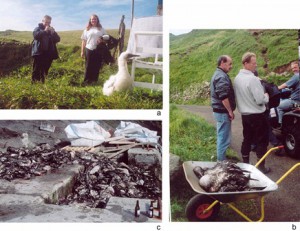 The gannet harvest on the island of Mykines (published in Australian Archaeology 67:55).

The intense debates between whale-hunting and whale-protecting nations (such as Japan and Iceland versus Australia and the USA) reveal the difficulties of communication between those who derive a livelihood from the products of the environment and those who wish to preserve it, but who do not always live in the same locale. This is demonstrated with a review of some Australian instances of relations between those in the conservation movement and ‘locals’ on the ground, including Indigenous Australians. After opposing it fervently in the early 1980s, Greenpeace has withdrawn its opposition to the pilot whale drive in the Faroe Islands.   In particular, Greenpeace was persuaded by claims that pilot-whale hunting (grindradráp) was a ‘traditional’ activity. The archaeological evidence for whale-hunting and eating whale-meat in the Faroes and other Norse settlements is discussed, followed by an analysis of the resolution of the disagreement between Greenpeace and the Faroes government.

Chilla Bulbeck and Sandra Bowdler
The Faroes grindradráp or pilot whale hunt: the importance of its ‘traditional’ status in debates with conservationists
December 2008
67
53-60
Article
You must be a member to download the attachment ( Login / Sign up )