The ebb and flow of an empire: The Ghurid polity of central Afghanistan in the twelfth and thirteenth centuries 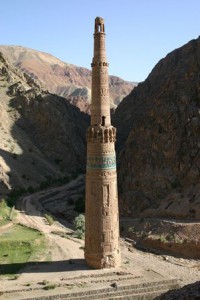 The iconic minaret of Djām stands in a remote mountain valley in central Afghanistan, the finest surviving monument of the enigmatic Ghūrid dynasty. The seasonally nomadic Ghūrids rose to prominence ca 545 / 1150–1151, when they devastated the capitals of the neighbouring Ghaznawid dynasty. Over the next 65 years the Ghūrids expanded their polity into Khurāsān and the northern Indian sub-continent, before succumbing to the Khwārazm-Shāh and then the Mongols. Their summer capital of Fīrūzkūh, which is thought to be modern Djām, was abandoned and never re-occupied.

The rediscovery of the minaret half a century ago prompted renewed interest in the Ghūrids, and this has intensified since Djām became Afghanistan’s first World Heritage site in 2002. The few studies that have been published, however, have largely been historical or architectural; relatively little archaeological data has been collected from Ghūrid sites and Djām has suffered extensive looting in recent years.

Two seasons of archaeological fieldwork at Djām, the detailed analysis of satellite images and the innovative use of Google Earth as a cultural heritage management tool have resulted in  a wealth of new information about known Ghūrid sites, and the identification of hundreds of previously undocumented archaeological sites across Afghanistan. Drawing inspiration from the Annales School and Adam T. Smith’s concept of an ‘archipelagic landscape’, I have used these data to re-assess the Ghūrids and generate a more nuanced understanding of this significant medieval  polity.  In  addition  to  complementing the événements which form the focus of the urban-based historical sources, the new archaeological data have enabled  a reconsideration of the urban characteristics of the Ghūrids’ summer  capital  and  explore  the  issues  of  Ghūrid  identity, ideology and the sustainability of their polity. The use of Google Earth, in particular, represents an advance in archaeological methodology applicable to semi-arid landscapes throughout the region.

David C. Thomas
The ebb and flow of an empire: The Ghurid polity of central Afghanistan in the twelfth and thirteenth centuries
2012
75
132
Thesis Abstracts
You must be a member to download the attachment ( Login / Sign up )