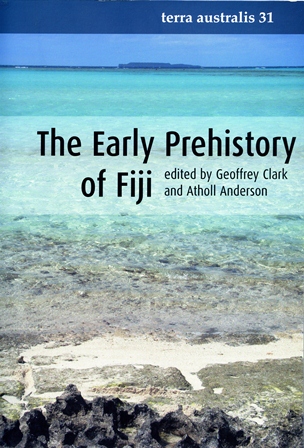 Fiji is pivotal. It anchors the central Pacific. It is then hardly surprising that Atholl Anderson and his colleagues working on the Indo-Pacific Colonisation Program (IPCP) found it necessary to expand the Program’s activities in Fiji beyond that initially envisaged – hence collaboration with Geoffrey Clark and The Early Prehistory of Fiji Project (EPF). Anderson and Clark recognise that bringing together a much stronger understanding of Fijian history and prehistory is essential if we are to clarify the bigger picture of Pacific colonisation. Fiji is the point of conjuncture. It is where West becomes East and where the unreality of taken for granted divisions like Melanesia and Polynesia is starkly realised.

There has been outstanding work done in Fiji – for example the pioneering work of Lawrence and Helen Birks at Sigatoka and Simon Best’s groundbreaking Lakeba project. These are solid foundation stones on which to build a more detailed overview of Fijian archaeology. But the bigger picture has been slow to emerge because doing archaeology in Fiji is not like doing the archaeology of a small isolated island. The Pacific archaeology staple procedure of establishing a coherent sequence of intermeshing landscape, faunal and artefact change, summed up in a definitive culture history volume, has been possible for islands such as Tikopia, Nuie, Niuatoputapu and even Easter Island; but not Fiji. Even if we established tidy sequences for each of Fiji’s numerous islands, and stacked them neatly one upon the other, we would still not capture the uniqueness, the complexity of Fijian prehistory. To borrow a metaphor from Ursula Le Guin (1989), Fijian archaeology is more a carrier bag of goodies than an arrow-like archaeological sequence. Its archaeologies jostle about, refusing to embrace linearity and the disciplined order of culture history sequences. Metaphors and models of Pacific colonisation with their talk of fast and slow trains, of point-and-arrow movement, have a way of unravelling when stretched across Fiji’s many, varied shores.

Clark and Anderson understand and appreciate the complexities of Fijian archaeology. There is no suggestion in this volume of their diminishing or circumventing its contradictions; but neither do they fully embrace Fijian prehistory. What they give us is closer to a stock-taking process, pulling together and synthesising disparate lines of evidence, sifting it, evaluating it, applying ‘chronometric hygiene’ protocols to the radiocarbon dates. Published data is collated and reinterpreted alongside new data from the Project’s field and analytical research. New evidence includes 68 new radiocarbon determinations from 13 sites, summaries of investigations at sites on the islands of Viti Levu, Mago and Beqa, results from analyses of faunal remains, stone artefacts, and ceramics, reconstructed vegetation histories for locations throughout Fiji, and the identification of previously unknown extinct megafauna. Some reptiles like the giant iguana, Lapitiguana impensa, which grew up to 1.5m in length and a terrestrial crocodilian. Volia athollandersoni, now sport distinctively archaeological names, an unusually frank demonstration of how the present claims, names and frames discovered pasts.

Clark and Anderson present an edited volume which is appropriately multiauthored but not fragmented or disparate. The volume consists of 16 chapters. Of these Clark and/or Anderson are authors on all but three; Anderson on 8 chapters and Clark on 11. So while this is an edited volume with 11 contributing authors, it is also very much a Clark and Anderson vehicle and vision of early Fijian prehistory. Other authors contribute specialist analyses. Clark and Anderson jointly author the Introduction and Conclusion, two chapters describing the fieldwork undertaken as part of the EPF Project, a chapter on radiocarbon dating, and they join Barry Fankhauser for the analysis of adzes. Trevor Worthy joins Anderson in two chapters on palaeofauna, and joins Clark in a chapter on bird, mammal and reptile remains. Katherine Szabo contributes a chapter on molluscan remains and joins Clark for the chapter on fish bone. There are three chapters on ceramics. Two are written by Clark and are in part drawn from his dissertation work while the third, on compositional analysis, is by Clark with Douglas Kennett. In addition there is a chapter on vegetation histories by Geoff Hope, Janelle Stevenson and Wendy Southern, and a chapter on stone artefacts by Chris Clarkson and Lyn Schmidt.

Chapters 1-7 give a series of big picture views, setting Fiji into the broader Pacific region. Here Anderson’s voice and vision are uppermost and the setting of this Fijian work within his wider Indo-Pacific Colonisation Program (IPCP) comes through strongly. Here Fiji is a piece in a bigger puzzle. Nevertheless, the internal complexity of the Fijian material is never submerged by this positioning within the broader Pacific frame. For example, in Chapter 4 Hope et al. conclude their analysis of vegetation histories by emphasising the complex, regionally-specific interweaving of climatic, landscape and human influenced processes. In bringing together their overview, Hope et al. are at pains to stress that untangling these strands enough to identify any straightforward narrative for the timing and nature of anthropogenic landscape change in Fiji remains highly problematic and it is likely to stay that way.

Chapters 8-15 focus in on detailed analyses of fauna and artefacts recovered from early Fijian sites. Here we see Clark’s voice coming forward and there are results reported from archaeological investigations conducted by Clark for his dissertation research as well as those specifically conducted within the rubric of the EPF project. In these chapters we begin to see the uniqueness of events in early Fijian prehistory and their carrier bag nature emerge. The importance of these events as a story in their own right, not just as a piece within a broader Pacific narrative of colonisation, is similarly more evident. In addition, these chapters have a more human feel; you can sense the people of Fijian prehistory not just the peopling of Fiji, especially in the chapters on ceramics and shell remains.

The concluding Chapter 16 brings us back to the big picture of Pacific colonisation. I appreciated the much-needed synthesis this chapter offers. Students and archaeologists working throughout the Pacific will be delighted to have available such a comprehensive yet succinct entry point into the Fijian evidence, especially one backed up by 15 chapters of detailed information and discussion. This excellent volume will be avidly read and often returned to.

Initially, after a first read I felt somewhat unsatisfied by this volume. The title proclaimed a volume about Fiji, yet Fiji felt oddly absent. This is due to the exclusive focus on the early period and on processes and effects of colonisation. I would personally have liked to see Clark and Anderson push a little harder into later prehistory so as to give a stronger sense of Fiji as a place with its own story to tell over and above narratives about the peopling of the Pacific. In the long run Fijian archaeology will have more to tell us if we ask less restrictive research questions. A more broadly-informed understanding of what happened here throughout the full 3000 years of human occupation, not just during Lapita colonisation, will enable us to understand the early period discussed in this volume in more human, peopled ways. However, I cannot fault Clark and Anderson for not providing a stronger view of Fiji in their volume as this was not among the objectives of either the Indo-Pacific Colonisation Program or the Early Fiji Prehistory Project. And of course, Fiji had not yet become Fiji during the period under discussion. That would come later.