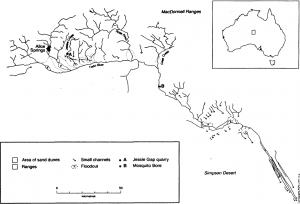 This paper reports on the radiocarbon chronology of two occupation sites discovered during a geomorphologic investigation of the Todd River catchment in Central Australia (Fig. 1). While it is widely accepted that the arid zone has been occupied since the late Pleistocene (Smith 1987, 1996), there are no dates available for the eastern MacDonnell Ranges. Data provided here on late Holocene archaeological sites will contribute to the larger spatial and temporal framework of human occupation of the Central Australian arid zone.

Burke, M.
The age of two human occupation sites in the Eastern MacDonnell Ranges, Central Australia
December 1997
45
55–57
Short Report
You must be a member to download the attachment ( Login / Sign up )