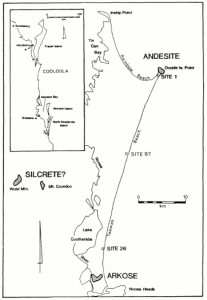 This paper presents the results of excavations undertaken at Teewah Beach Site 26,  situated along the Cooloola  coast, southeast Queensland. The open site yielded a stone artefact sequence dated from 5531 BP to 316 BP (calibrated), with faunal remains (shellfish and fish) appearing at ca 900 BP. Major inferences drawn from the excavations are:

1. despite a human presence in southeast Queensland for at least 20,000 years, ca 5500 BP  marks the first major  human occupation of Cooloola. Such a pattern resulted from the localized adaptation of an existing coastal settlement-subsistence system which had been following the transgressing coastline westwards until its relative stabilization at ca 6000 BP;

2. fishing may have been of  equal or greater significance during the mid-Holocene compared to the last 1000 years;

3.  the distinctive southeast Queensland artefact type, bevel-edged tool (‘bevelled pounder’) has an antiquity of at least between 5000 BP and 4000 BP, not ca 1500 BP as previously thought, thus making it one of the oldest, continuously used plant food processing tool types known in Australia;

4.  increased relative use of local resources (shellfish and stone) across Cooloola and other parts of  coastal southeast Queensland during the last ca 1000 years corresponds to the development of regionally is dated settlement subsistence systems and associated socio-political entities similar to those recorded historically; and

5. while most of these conclusions complement Hall and Hiscock’s (1988) model of cultural change for southeast Queensland, I argue that their use of intrinsic population increase as a prime mover is theoretically problematic.

McNiven, I.J.
Teewah Beach: New evidence for Holocene coastal occupation in southeast Queensland
December 1991
33
14–27
Article
You must be a member to download the attachment ( Login / Sign up )