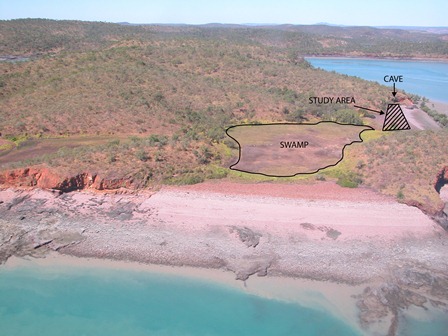 Here we report on a variety of stone constructions that have been recently recorded and mapped on Rankin Island in the Kimberley region of Western Australia. The function of one of these features, a long stone wall, is discussed in the context of similar built stone features in other areas of northern Australia and Torres Strait. The possibility that the wall functioned as a fish trap is examined but dismissed on the basis of the survey levelling data which indicate that even with a higher relative sea stand of +1–2 m the wall would only have been breached by king tides on a few days of the year. It is probable that the wall had associative ‘ritual’ or ‘magic’ functions, although it is acknowledged that the distinction between ‘ritual’ and ‘subsistence’ is a moot one where increase ceremonies and hunting magic are regarded as essential for success in procuring resources.

Sue O'Connor, Len Zell and Anthony Barham
Stone constructions on Rankin Island, Kimberley, Western Australia
June 2007
64
15-22
Article
You must be a member to download the attachment ( Login / Sign up )