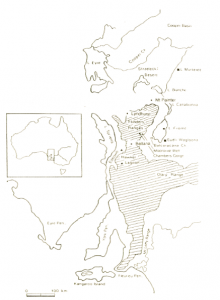 Places mentioned in the text (published in Australian Archaeology 52:47).

This paper will present some aspects of a lithic analysis that was conducted at Beltana, South Australia, as part of a larger research project investigating Indigenous fringe occupation sites (Di Fazio 2000). The town of Beltana is located south of Leigh Creek in the Flinders Ranges (Fig. 1). This predominantly arid area is characterised by cliffs, boulder slopes and gorges (Fox 1991:16). Beltana was established in 1870, taking its name from the Adnyamathanha word for running water (Beverley Patterson 2000, pers. corn.). Today Beltana is predominantly known as a ghost town, however, in its heyday it offered a number of services including a telegraph repeater station, a railway station, and a mining exchange. The Adnyamathanha people were in continuous occupation of the Beltana area from the pre- to post-invasion periods, however during the post-invasion period they were primarily confined to the fringe camps on the outskirts of the town.

Di Fazio, B. and A. Roberts
Stone artefacts from the Beltana region, South Australia
2001
52
47–49
Short Report
You must be a member to download the attachment ( Login / Sign up )