Station camps: Identifying the archaeological evidence for continuity and change in post-contact Aboriginal sites in the south Kimberley, Western Australia 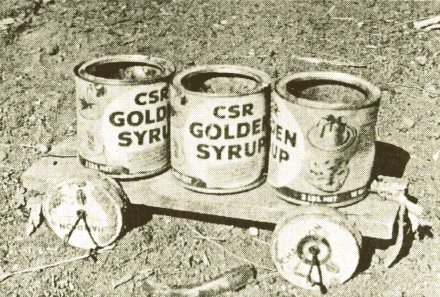 A child’s pull along toy made from tobacco tins and golden syrup tins ca 1959 (published in Australian Archaeology 53:28).

Since the passing of the Native Title Act 1993 requiring Native Title claimants to provide  evidence of cultural continuity throughout the post-contact period, Australian archaeologists have been seeking new ways in which archaeological models can be most effectively applied when working with Native Title claimants (Lilley 2000). One outcome of this revision is that earlier models of post-contact, or frontier archaeology which focused on the processes of colonisation and dispossession are being revised to provide evidence that meets the requirements of the Native Title Act 1993 and, in particular, a clause in the l998 amendment of that Act requiring Native Title applicants to (i) be identifiable with’ the Aboriginal people of the claim area at sovereignty and (ii) be able to demonstrate whether ‘the community has maintained connection with the land by observing, as far as practicable, traditional customs, laws and practices of its predecessors’.

Smith, P.A.
Station camps: Identifying the archaeological evidence for continuity and change in post-contact Aboriginal sites in the south Kimberley, Western Australia
2001
53
23–31
Article
You must be a member to download the attachment ( Login / Sign up )