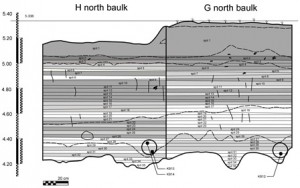 The north section of Squares G and H in Pit at the Bend Road Site (image from Australian Archaeology 70:9).

Bend Road is an open site covering c.12 hectares on a sand sheet formation in southeast Melbourne, now bisected by the new Mitcham-Frankston tollway. Results from earlier salvage archaeology suggesting this was a significant scientific site were subsequently questioned on geomorphological grounds that indicated post-depositional disturbance. In 2006 the authors carried out extensive and detailed excavations and analysis that indicated that while both large-scale aeolian deflation events and smaller scale bioturbation could be demonstrated, paradoxically the archaeology retained a clear coherence. While the bulk of the archaeology relates to the backed artefact period – the site has now yielded hundreds of asymmetric points and geometric microlith forms from the late Holocene – an earlier sequence extends back to 30–35,000 BP, putting Bend Road amongst the oldest known sites in Victoria. This paper summarises the methodological procedures and results that reflect both the natural disturbances to the site and the data that demonstrate its archaeological integrity, and points to a growing imbalance between increasingly sophisticated dating techniques available to the archaeologist and the levels of scale and resolution that usually pertain in archaeological sites.

Geoff Hewitt and Jim Allen
Site disturbance and archaeological integrity: The case of Bend Road, an open site in Melbourne spanning Pre-LGM Pleistocene to Late holocene periods
June 2010
70
1-16
Article
You must be a member to download the attachment ( Login / Sign up )