Shell mounds in 1972 and 1992: Reflections on recent controversies at Ballina and Weipa 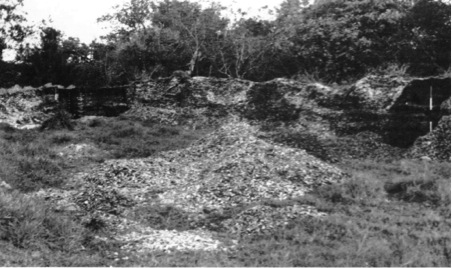 One of the investigated shell mounds (published in Australian Archaeology 37:3).

In 1972 I came to Australia for a year to gain a comparative perspective on shell middens as part of a larger Ph. D. research project into coastal prehistory, and spent two spells of fieldwork, at Ballina, on the north coast of New South Wales, and at Weipa on the west coast of the Cape York Peninsula in northern Queensland (Bailey 1975, 1977). Both areas had large shell mounds which seemed to offer interesting possibilities for palaeoeconomic investigation. My interest was inspired largely by research considerations, but it was apparent even then that sites in both areas were under threat of damage or destruction, a threat reinforced by local opinion that the shell deposits were natural accumulations of little or no Aboriginal significance. The Ballina shell mounds had been all but destroyed long before 1 arrived in Australia, while the remaining intact fragment of the shell mound which I investigated at Chiciba Creek came under renewed threat from proposed housing development before I left. At Weipa it turned out that the Comalco Mining Company, which runs one of the world’s largest open-cut bauxite mines, were reviewing alternative options for future development, some of which would have caused large-scale destruction of sites, and they therefore took a close interest in my views about whether the shell mounds were natural or cultural deposits. Sites in both areas were subsequently placed under the protection of State and Federal legislation.