Rottnest and Garden Island prehistory and the archaeological potential of the adjacent continental shelf, Western Australia 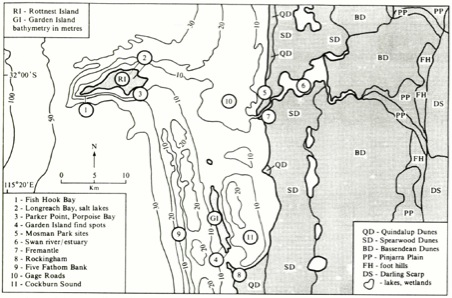 Location of Rottnest and Garden Islands off the WA coastline (published in Australian Archaeology 33:39).

For several decades Quaternary investigators have examined the geology and fossil record of Rottnest Island, 19 km offshore Fremantle, Western Australia (Fig. l), and, more recently, have searched the island for evidence of prehistoric human occupation. My own sporadic searches over the past 12 years, including a week’s examination of deflation surfaces and other likely find-spots in August 1990, have yielded only two stone artefacts. These are as yet the only finds attributable to a human presence on Rottnest prior to its being cut off by glacio-eustatic sea level rise, c. 7000 BP (Churchill 1959; Playford 1983). This paper reviews relevant finds from Rottnest Island, as well as ones from Garden Island 19 km south-south-east, and from the adjacent mainland coast, and assesses the archaeological potential of this part of the submerged continental shelf.

Dortch, C.E.
Rottnest and Garden Island prehistory and the archaeological potential of the adjacent continental shelf, Western Australia
December 1991
33
38–43
Article
You must be a member to download the attachment ( Login / Sign up )