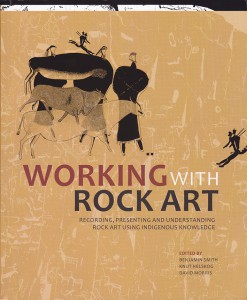 A telling sign of rock art’s disciplinary maturity is a publication in which the illustrations are mostly inessential. Though the 24 chapters each average just under six illustrations, the focus is firmly methodologically and theoretically on aspects of rock art documentation, interpretation and presentation. This focus also helps to destabilise rock art’s ocularcentrism. Both Janette Deacon (‘Expressing intangibles: A

recording experience with /Xam rock engravings’) and Knut Helskog (‘The routine of documentation’) express frustration and caution respectively with regards to routine forms of rock art documentation, which can close off key non-visual understandings of rock art. Deacon’s use of narrative photography and mapping powerfully projects archived images and words of /Xam San on their rock engraved hinterland. This is done literally and at night, when normal vision gives way to a wider sensorium. This strongly locative intervention ventures into territory that text alone cannot. Helskog warns against repetitive routines and argues for regularly varying one’s recording techniques and habits (including the seasons and times of day) in order to gain additional visual and more-than-visual perspectives on rock art. These two author’s perspectives set up a productive tension with the Editor’s foreword lament that ‘we have no internationally agreed upon methods or standards of practice’ (p.xi). Perhaps the diversity of rock art makes such methodological standardisation impossible. Indeed, perhaps we should encourage still further methodological diversity to help expose and overcome ingrained biases of practice. Technologies of vision crop up again in Paul Taçon’s ‘Presenting rock art through digital film: Recent Australian examples’. The salient issue—apart from the surprising paucity of popular archaeological films in Australia and thus the importance of this medium in sensitising non-Indigenous Australians to the deep history they have stumbled upon— is the speed and skill with which Indigenous youth take to digital recording methods. These are skills and technologies they can transfer to other spheres of their lives.

The transfer of skill and knowledge applies to the book as a whole as it is the product of a 2006 Scandinavian-South African rock art conference that also drew in researchers from west and east. This intellectual geography provincialises western European notions of heritage and management as but one of a range of possibilities rather than the normative standard. But for a volume so focused on complex theoretical and methodological issues, more space could have been given to northern and southern understandings of indigeneity, especially as the term Indigenous knowledge governs the book’s subtitle. This term is notoriously ambiguous (e.g. Haber 2007) as it can mean using ‘Indigenous knowledge’ as one of a range of contextually relevant data sets to understand rock art—preferably in something approaching an insider’s understanding. It can also mean a future vision for rock art research in which the descendants and custodians of rock art traditions play an ever-greater role in interpreting, managing and presenting rock art. A hint of the latter is provided in a nice personal touch from David Morris, who dedicates his chapter to the late Batista Salvador, ‘the first San guide of rock art in South Africa’ (p.242). The former approach attracts criticism that it seeks to contain and colonise Indigenous knowledge within a normative archaeological approach. The latter runs the risk of centring Indigenous knowledge for politically correct and expedient reasons (Sylvain 2014).

Interestingly, several of the book’s authors could claim Indigenous status, but do not, preferring to align their insights through a broadly archaeological lens. This separation between archaeologists and the producers of rock art both past and present leads to thinking of indigeneity as a product rather than as a process. An instructive exception is Ndukuyakhe Ndlovu’s chapter on three Drakensberg rock art site ‘museums’ in which he sketches the complexity of this rock art’s authorship and afterlife. Today’s approximately 120,000 self-identified San have, sensu stricto, little geographic or genetic link to Drakensberg rock art. Stronger links are found sublimated in local African Nguni-speakers who were—until the overthrow of Apartheid in 1994—too ashamed to admit their San ancestry. But they do so now, acquiring a dual identity that is as inconvenient to the modern nation state as it is challenging to ‘real’ San. Further north, Leslie Zubieta writes on gendered art in south-central Africa in ‘Animals and humans: Metaphors of representation in south-central African rock art’. She is able to show close links between Indigenous knowledge and rock art even though the latter is no longer produced. In the northern hemisphere this relationship is much more tenuous. For example, Antti Lahelma in ‘Politics, ethnography and prehistory: In search of an ‘informed’ approach to Finnish and Karelian rock art’ points out that today’s Indigenous Sàmi have, at best, vestigial or derived knowledge, traditions and practices relating to ca 1500–5000 year old engraved and painted traditions on the land they now inhabit. But he suggests that these vestiges are nevertheless still part of Braudel-like ‘slow-moving deep bone structures’ (p.117) and may be used in multistranded analogical arguments.

While analogy is central to our interpretation of culture it remains contentious. It is vigorously championed by David Whitley in a western United States Numic rock art and ethnographic context, and by David Pierce on methodological grounds using painted burial stones found in southern African coastal excavations. Whitley’s salient point is that we have to read not only through the bias of flawed anthropological interlocutors, power relations and historical contexts, but also through emic notions of secrecy. The latter point situates agency beyond the human. Numic people disavow rock art’s anthropic authorship, locating it in a network of people,

supernatural agents, and evolutionary psychology. Five authors explore ways other than analogy to attribute authorship and meaning. Thus, Tilman Lenssen-Erz tries to calibrate Maslow’s hierarchy of human needs with common archaeological criteria in a pragmatic, rather than phenomenological, approach that uses Namibian hunter-gatherer rock paintings and rock painting site types as a case study. Thembi Russell usefully advocates the use of geographical information systems for ‘the large-scale analysis of horizontal spatial patterning and the small-scale analysis of vertical patterning in rock art’ (p.37) to consider the age and authorship of especially southern African Khoekhoe or geometric art. Juha Pentikänen, in his chapter ‘Symbols in stone: Following in the footsteps of the bear in Finnish antiquity’, carefully deploys multiple evidential sources including archaeology, place names, oral and written histories, and shamanic drums to investigate the curious mismatch between apparently pan-Scandinavian bear cult beliefs and practices, and their absence or patchy presence in Finnish rock art. This sobering work shows how materially evanescent even seemingly long-lived ritual lifestyles can be. Andrzej Rozwadowski also seeks to go beyond analogy by looking through, and beyond, understandings of shamanism using rock art and cognate material culture, especially enlivened objects such as drums in ‘Rock art, shamanism and history: Implications from a central Asian case study’. Finally, Trond Lødøen relies on a phenomenological approach in a fascinating study of the Vingen engraving complex in western Norway. He uses a shaped stone engraver, argued to come from a potentially dangerously liminal coastal location, to think through how the conceptualisation, production and consumption of engraved images can empirically tether a wider set of human engagement with stone.

Here the Scandinavian partnership works particularly well. Southern African rock art research is overly concerned with visually spectacular hunter-gatherer rock paintings. This prejudice persists despite the exegesis for these rock paintings being derived from San who lived in rock engraving areas. Making engravings offers entirely new theoretical and methodological potential through which to advance knowledge, beginning with the definition of the nature and extent of a rock art site in both etic and emic terms. Further, the ability of engravings to take rock art research beyond a sub-disciplinary niche is demonstrated by the potent paring of Lindsay Weiss’ and David Morris’ chapters on the Wildebeestkuil rock engraving site museum in central South Africa. Weiss’ ‘Rock art at present in the past’ recasts rock art as just one of many human marks left on this place, a remnant ‘archipelago of histories’ (p.223). She situates the archipelago not in a linear chronology, but suggests rock art defies such neat and seemingly inevitable chronologies and the power-hungry interests that invest in such fictions. David Morris encourages a similar ‘jostling of voices’ (p.224) by promoting a bricolage approach where San guides— albeit from two non-local San groups displaced by war—create and blend their own narratives of the place rather than parrot standard rock art orthodoxies to visitors.

The Wildebeestkuil chapters thus have very little to do with putative past meanings and they group well with the chapters on rock art as heritage. Heritage and its management remains a critically undertheorised field, which is often reduced to boilerplate site management plans and impressive-sounding but deeply-flawed platitudes promoting positive heritage while supressing less palatable thanatic episodes. Terje Norsted’s innocuously titled ‘Aspects of documentation from conservation purposes exemplified by rock art’ belies a most thoughtful piece that transcends the normal route such articles take. He does this by interrogating notions of authenticity, what we deem heritage-worthy and unworthy, and ceding human agency to natural processes larger than our theory or technology can comprehend. Similarly, Anne-Sophie Hygen and Alexey Rogozhinsky immediately identify the paradoxes and contradictions not just inherent in, but essential to, rock art management. They use a Kazakhstani context, another welcome non-Anglophone case study, to suggest the real challenge is in managing meaning. This challenge is borne out in a starkly contrasting pair of papers by Gitte Kjeldsen and Pieter Jolly. Kjeldsen in ‘Norwegian rock art in the past, the present and the future’ acknowledges that working in a small, well-resourced northern country tends towards a UNESCO-style universalising of value and connection to rock art because it is perceived and presented in an imagined original state. Yet there is also an underdeveloped commentary on the state-sponsored Norwegian practice of painting engravings for visitors’ visual comfort, a contested practice that bears out Norsted’s insights on our anxieties of authenticity. Jolly describes a much more resource-constrained project in the southern alpine country of Lesotho where most people are unaware of, and unconnected to, rock art. Here, visitors’ visual comfort is tended to opportunistically by self-appointed guides who wet rock paintings to bring out their colour. To stop this practice and also to prevent graffiti damage, Jolly initiated a poster and radio project explaining the importance of rock art. The project was rather too successful, as the intended recipients of the 1000 posters—schools—seldom received them because people hijacked them for the beautiful and colourful addition they made to their home décor.

The book’s cross-feritilisation of northern methodological expertise and southern interpretive strength works well, but is undermined slightly by the six years between conference and publication. For example, Dipuo Mokowe’s article ‘Representing southern African San rock art: A move towards digitisation’ provides a valuable overview of recording over the last 200 years, but devotes less than two pages to digitisation, much of which has been superseded. The concluding chapter by Catherine Namono and Chris Chippindale comparing cultural heritage management in Yellowstone, where rock art is absent or, at least, not mentioned, and Kruger and Kakadu National Parks misses the last half-decade’s painful evolution as they try to understand and manage cultural heritage. Sadly, the relatively upbeat forecast for the Wildebeestkuil rock art site museum in 2006 has since deteriorated, having been victim to the fiction that heritage must pay for itself (Morris et al. 2009; Morris pers. comm 2012).

I greatly enjoyed this volume, as much for the trajectories of thought it stimulated as for its content. The real challenge is to southern-based researchers, who tend to have well established and successful ways of thinking and working. This makes it harder to explore alternative ways of thinking about rock art. Conversely, the dearth of ethnography, but similar cherishing of hermeneutics, frees the northern and Asian-focused researchers from orthodoxies and opens the potential for radically new ways of working with rock art.

Morris, D., B. Ndebele and P. Wilson 2009 Who is interested in the Wildebeest Kuil Rock Art Centre? Preliminary results from a visitor questionnaire. The Digging Stick 26(2):17–18, 23.

EVENT CALENDAR 4 May 2021
No Events
view all