Review of ‘Women in Archaeology: A Feminist Critique’ edited by Hilary du Cros and Laurajane Smith 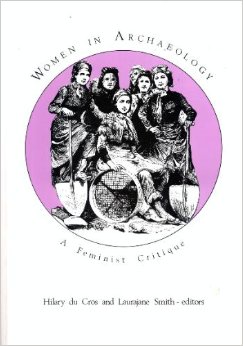 This collection of papers provides an excellent sample of the wide range of issues discussed under the heading ‘gender archaeology’. The volume is a result of the first Women in Archaeology Conference held at Charles Sturt University, Albury, 1991. The papers are not limited to gender specific issues although gender is the principle theme. The majority of papers are cogent and succinct, granting a perspective largely from Australian roots. The collection is directed at introducing constructive paths for future research. Catherine Roberts sums up this purpose in a brief sentence: ‘the ultimate aim of the incorporation of gender into archaeology is to produce less biased accounts of the past’ (p.16).

The introduction by Hilary du Cros and Laurajane Smith contains a good summary of the volumes content. The discussion on the origins of the conference and papers is longer than desirable, but does provide a context for under- standing the two major sub-themes presented in the papers. The majority of the papers are focused on gender theories in archeology (Parts I-V), the latter on women in the archaeological work place (Parts W-VII). The editors express the opinion that these two issues are interrelated and in- separable. In several but not all of the articles these issues do appear as obvious interwoven threads. It can be argued that researchers in the social sciences interpret data as participant observers, thus life experiences influences synthesis.

The volume is best understood as consisting of three general series. The initial sections (Part I-II) discuss gender within the discipline as well as the premises, categories, and standards that structure archaeological research and interpretation. Margaret Conkey’s article (Part I) Marking the Connections: Feminist Theory and Archaeology of Gender provides an excellent dialogue on feminist and archaeological theoretical approaches and how they differ. She presents the good, the bad, and the ugly of the growth of feminist scholarship and the isolation of archaeological research from the people behind the site/artefact. She gleans from this discussion research questions relevant to archaeological theory and research. She notes repeatedly that gender cannot stand alone as the object/subject of knowledge but that gender must be understood in the dynamic context of social life. Gender- less premises negate the research hypotheses from which social interaction theory is derived. She also notes: ‘for most archaeological research we probably do not need to question the existence of gender …but this – like the sexual division of labour – should be problematised not assumed.’ (p. 8).

Part II presents gender bias in the epistemological concepts that we cut our teeth on as fledging archaeologists. The division of labour, man the hunter/tool maker and woman the gatherer are examined in both Jane Balme and Wendy Beck’s paper and Stephanie Moser’s paper on reconstructions. Pamela Russell provides a discussion of the Venus figurine bias within both archaeological and feminist literature. Alison Wylie in her critique of Part II notes the Venus figure/ goddess concept is an outgrowth of 1970s cultural feminism that has drawn intense criticism within the women’s movement and should be associated with movements such as new age mysticism. Wylie castigates Russell with vigour for her misrepresentation of ‘new feminist authors’. This in itself is informative reading. Putting Wylie’s critique aside, the underlying emphasis of all the papers in Part II is the need for archaeologists to scrutinise data and develop new conceptual frameworks and ultimately to think about and push at the constructs that constrain understanding of social relationships in prehistoric populations.

The middle section (Part III-IV) consists of gender case studies and critiques of interpretations. Recommended in this section are: Judy Birmingham’s paper Eurocentric gender roles imposed on Tasmania Aboriginal women at Wybalenna; Matthew Spriggs’ very interesting observations on gender relations at Aneityum during the missionary period; Female Figurines of the Upper Palaeolithic by Linda Conroy; and Claire Smith’s paper Negotiation of Gender Through Western Desert Art. These four papers provide a good sample of the various applications of research relating to gender.

The later sections (Parts V, VI and VII) address the place of women in the profession then and now. Part V also includes two papers on the identification of women’s sites, such as female prison factories, and their interpretation. Anne Bickford’s paper discusses the range of sites related to women’s history. Chris Johnston’s focus is the ideological bias of history and problems with thematic analysis. Both are well worth reading.

The other papers in Part V relate to women in the Cultural Resource Management (CRM) profession. Jeanette Hope’s article Double Bind was full of good points but rendered impotent by too much moaning and bitterness. Anne Clarke’s paper on CRM as archaeological housework is easy for any public service cultural resource manager to identify with, though the sub-title probably should read ‘confining both women and men to the ghetto of management’, not just women. The points raised in Feminist Issues in Cultural Resource Management by Laurajane Smith should concern all of us in the discipline. She discusses some critical points about gender and the current Australian database, as well as the issues of class and race within the archaeological record.

The papers in Part VI on the archaeological career structure provide a statistical gauge of the health of the discipline. It would be interesting to compare statistics from 1995 with those compiled in these articles. The last two papers in the collection (Part VII) relate to the workplace then and now. Female Skeletons by Hilary du Cros provides a very readable slice of life on women archaeologists and Australian society from the 1930sto the 1960s.

I strongly recommend this set of papers to those in the profession that have side-stepped the literature on gender or groaned at conferences when papers are presented about women in the archaeological workforce. The collection is a thought-provoking Australasian addition to the growing body of literature. For the novice to gender archaeology I would suggest you peruse the volume from end to middle. Start with Betty Meehan’s Epilogue and then jump into the middle to examine a few case studies. Then return to the beginning and sample the variety of issues included from cover to cover. You will walk away from this collection of papers with a good understanding of the many facets of gender relations that are addressed under the umbrella of women in archaeology.

Simmons, A.
Review of 'Women in Archaeology: A Feminist Critique’ edited by Hilary du Cros and Laurajane Smith
June 1996
42
70–71
Book Reviews
Download
You must be a member to download the attachment ( Login / Sign up )