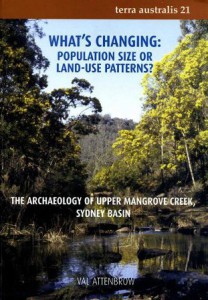 ‘What’s Changing?’ is a revised and substantially updated version of Attenbrow’s doctoral research completed in 1987, which documents and explores the archaeology of the Upper Mangrove Creek Catchment (UMCC), located in the Sydney Basin. The exceptionally rich datasets from the UMCC were obtained by Attenbrow and co-workers during the Mangrove Creek Dam salvage project, with additional fieldwork conducted by Attenbrow during PhD research. Attenbrow provides an extremely detailed investigation of the prehistory of the UMCC via an analysis of 30 rockshelter deposits. One of the major findings of this work was that there was a continuous increase in the number of sites occupied in the last 12,000 years and a dramatic increase in the number of stone artefacts deposited in the third millennium, followed by decrease over the last 2000 years. Attenbrow is unconvinced by arguments which explain changes in the numbers of sites and artefacts in terms of population change. Instead, Attenbrow explains the patterns in terms of other behavioural changes, including modifications to habitation, subsistence and land-use patterns which were influenced by climatic and environmental changes.

Across 10 chapters, Attenbrow outlines the context, aims, methodology, results and interpretations of her research. The book can be roughly divided into three parts. Part 1 (Chapters 1–2) defines the study region, outlines previous archaeological investigation, and presents a comprehensive, critical synthesis of the various interpretations and explanations in Australia in the 1970s and 1980s concerning temporal changes in the number of sites inhabited and the numbers of artefacts accumulated in individual sites. Part 2 (Chapters 3–5) presents the aims and methods of the fieldwork and excavation programme, presents the fieldwork results, and considers possible biases in the archaeological record and datasets (survey design, sample size, visibility, destruction). Part 3 (Chapters 6–10) is the heart of the monograph, where Attenbrow builds her argument that changes in the number of sites and artefacts through time is not necessarily simply explained by population change. Chapter 6 presents the habitation and artefact indices Attenbrow generated, and the results of multiple analyses concerning trends in the numbers of sites and artefacts in the UMCC. Chapter 7 presents a comparative analysis of quantitative trends in artefact discard and site numbers in five other regions of eastern Australia. Chapter 8 argues that previous population-based explanations for quantitative changes in eastern Australia cannot be sustained, and that valid alternative explanations can be proposed to explain quantitative changes. Chapter 9 explores correlations between climatic and environmental change and observed temporal changes in the archaeological record of the UMCC. In Chapter 10, Attenbrow synthesises the UMCC data to deliver a millennia-by-millennia model of changing subsistence and technological practices, habitation patterns, land-use, and mobility over 12,000 years of catchment occupation, and identifies future research programmes to test the model proposed.

Although Attenbrow tackles many substantive issues facing the analysis of past Aboriginal societies, perhaps of greatest interest is her approach to teasing out the multiple factors behind changes in habitation and artefact indices. Instead of using the number of sites occupied through time as a proxy measure of population, she treats them as changing areas of activity within the catchment, which was itself part of a much larger foraging range. She classifies each site as a base camp or activity location/transit camp based on the amount of stone deposited per millennium, and traces the history of site occupation in terms of these site types, and their location in different topographic zones within the catchment in 1000 year chronological units. Using these data she identifies a dramatic increase in the number of sites being used as base camps 2000–3000 BP, and greater use of activity areas/transit camps in new topographic zones after 2000 BP, and argues that this reflects a change in habitation patterns and reorganisation of subsistence practices rather than population growth per se. There are clear methodological issues with classifying sites as base camps or activity areas based on the number of artefacts per unit time, of which Attenbrow is aware. Several avenues are identified to further test this interpretation.

Turning to the lithic evidence, she argues that a continuous increase in the frequency of bipolar knapping techniques, starting c.6000 years ago, indicates a reduction in residential mobility or restricted access to stone outside the region. Backed artefact discard begins 9000 years ago, peaking 2000–4000 BP, and declines thereafter. Attenbrow draws on faunal, technological and environmental data to propose that the increased production of backed artefacts was a risk minimisation strategy employed to avoid hunting failure resulting from climate and environmental changes. She argues that the return to warmer, wetter conditions did not result in a return to the old patterns of landscape use. An increasing use of edge-ground implements and changes in residential mobility are seen as indicative of new social and territorial organisations. Attenbrow draws several high-level conclusions from the study: a region’s prehistory cannot be based on the evidence from one, or a few selected sites; the use of one or two indices in isolation is inadequate when exploring long term archaeological trends, and multiple lines of evidence need to be utilised in the analysis of the archaeological record.

The work makes a major contribution to the discipline. The in-depth analyses provide detailed information about the prehistory of the UMCC. The work is perhaps the most detailed, methodologically rigorous and data-rich investigations of a single region, and how several processes, often proposed as important factors, changed though time in one region and created patterning in site numbers and artefact discard rates. Novel approaches are applied to assess changing site and landscape use, which can be applied to the interpretation of data in other regions. Attenbrow’s research is an able demonstration of the value of moving beyond simple prime mover models to explain complex archaeological change. This research is ongoing and Attenbrow identifies many avenues to further investigate the models proposed.

Attenbrow clearly sets out the research aims, defines terms, details methods (field survey methods, excavation strategy and methods and analytic methods) includes basic (but not often reported) details of each excavation (rockshelter dimension, aspect, excavation area, depths) and the contents of each deposit (stone, faunal remains, plant and charcoal). It is well illustrated via photographs, maps, tables and figures. The data are presented in four appendices, 73 figures and 51 tables (main text), and in such a way that it can be easily utilised by other researchers. The information presented (e.g. references and age determinations) is consistent and accurate.

Although the volume is exceptionally well-written, a number of figures are not easily read. Figure 3.14 (p.57) could use some dots in the legend, and a figure displaying the changes in the numbers and distributions of sites by function (base camp, activity location/transit camp) by topographic zone would have been a useful inclusion (perhaps a combination of Figures 3.14 and 6.4). Given so much ground is covered, an index would also be helpful.

The monograph is a substantial volume reflecting many decades of Attenbrow’s research and critical thinking. As such, it is not possible to do it justice in the short space of this book review. It should be read by professional archaeologists interested in Australian and regional prehistory, demographic change, and the role of multiple processes in shaping the archaeological record. It is also a useful teaching resource, being a clear example of a carefully planned and well-executed research project. It contains an excellent critical synthesis of interpretations and explanations of quantitative change in Australia during the 1970s and 1980s (Chapter 2) and discussion of biases in the archaeological record and datasets (Chapter 5): both valuable student reading. There is no doubt this monograph will continue to make an important contribution to Australian archaeology for years to come, and I look forward to further tests of proposed habitation and land-use models (pp.222–223; 241; 243–245) and the results of current and future research projects identified by Attenbrow.

Brit Asmussen
Review of What’s Changing: Population Size or Land-Use Patterns by Val Attenbrow
December 2009
69
75-76
Book Reviews
You must be a member to download the attachment ( Login / Sign up )