Review of ‘Time, Energy and Stone Tools’ by Robin Torrence 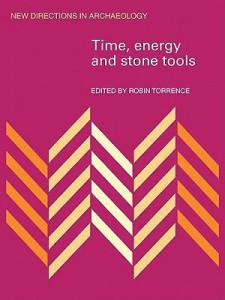 This volume of eleven essays is part of a revolutionary approach towards stone artefacts. It recognises that the conventional treatment of artefacts as ‘types’ is static and of limited value. A broader context of middle range theory is needed. Reduction strategies, material flaking properties, artefact mass, distance to stone source, and the capacity of an implement to carry information are dynamic elements with theoretical implications. In this book, the approach is analogous to optimal foraging strategy studies, as indicated by the reference to time and energy in the title.

An optimsing approach involves concepts which are not normally associated with stone artefacts. The terminology is largely derived from the literature on evolutionary ecology. Some of this may be unfamiliar to Australian readers, and perhaps dismissed as jargon. However, to use the necessary concepts, it is important to be fluent in the language. For example, ‘currency’ refers to factors such as time, energy, material or information which identify what kinds of costs and benefits are under analysis. Another term is ’embeddedness’. This refers to an activity taking place in the context of a broader process, such as stone material procurement in the process of travelling from one camp to another (rather than by special trips or exchange).

Most essays in this volume were originally presented at a conference in 1982, and are listed below.

Torrence: The introductory chapter calls for a unifying body of theory. Torrence presents a case for stone tools functioning as optimal solutions (eg within a subsistence strategy) as a central theme. She also defines much of the terminology used in the book and outlines the conceptual framework.

Hayden: This is an evolutionary approach which addresses global changes in stone technology. It is concerned with strategies for stone tool resharpening and raw material conservation which progress in regular stages.

Camilli: This is an attempt to use survey data from Utah which are thought to represent upland sites of pre-ceramic seasonally mobile horticulturalists (1800 to 1600 BP). The objective was to use stone artefacts to indicate if a site was a single event, overlapping occupations, or reoccupations in exactly the same place.

Morrow and Jefferies: This study uses the Black Earth Site (Middle Archaic =8000 to 5000 BP) in Illinois to determine if chert procurement processes were from trade, special trips, or embedded within seasonal movements.

Jeske: The example here is a Middle Woodland/Hopewell occupation (2400 to 1400 BP) in Ohio near the Black Earth Site discussed by Morrow and Jefferies. Economising strategies at the Mount City Site are analysed in terms of expenses for material acquisition and artefact production.

Lurie: This study is on the Koster Site in Illinois in the same region. It examines changes in mobility and stone economising strategies during the Middle Archaic (8200 to 4900 BP) in terms of stone source, material quality, technology and edge types.

Torrence: This paper is concerned with the ‘decline’ of technological excellence in the British Neolithic or the American Late Woodland. Torrence presents risk minimisation linked with reduced mobility as an explanation.

Boydson: This paper uses eight sites in the central United States (including the Koster Site discussed by Lurie) which have a Late Archaic (1000 to 3000 BP) component. The problem is to explain the presence of both flaked and ground hafted axes. Boydson concludes that the flaked axes represent low cost but low benefit, whereas the ground axes are high cost – high benefit.

Myers: The problem here is to explain a change from Early to Late Mesolithic in Britain (11,000 to 5000 BP). This is the shift from projectile heads of antler and large blades to those with microliths. A time stress model is used to consider the effect of reliable and maintainable technologies in respect to hunting risk.

Gero: This article was primarily concerned with the information carried by stone artefacts and its social implications. Gero looked at raw material rarity, tool size, tool longevity, number of production stages, and specialist manufacture from the Huaricote ceremonial centre in Peru (4000 to 1000 BP).

Jochim: This study is further to that presented by Myers, but 600 km to the southeast in Germany, where microlithic spear heads were replaced by large blades and antler. This reversal of the change discussed by Myers above was explained by different vegetational changes.

Four of the essays deal with central United States (Morrow and Jefferies, Jeske, Lurie and Boydson). This is a region where limestone from the carboniferous Period provides an abundance of cherts. The high flakability and distinctiveness of some of the sources make it a favourable theatre for studies on procurement, manufacture and discard. This was used to measure processes such as settlement change, exchange systems. technological strategies and dependence on agriculture.

The work by Camilli in southwestern United States was concerned with settlement, but she encountered shortcomings in survey methodology such as a lack of control over the definition of site size, ground visibility and site formation processes. As a result she seemed forced to try what I consider some ‘statistical slights of hand’.

The two European examples include a number of sites where changes in artefact assemblages and the environment took place at the same time. Optimisation was used to explain the effect of the environment on culture.

The most ambitious paper was that by Gero who tried to use a ceremonial centre in Peru to indicate social factors from stone tools. Although the analysis seemed somewhat laboured, she used the information content of artefacts to interpret social complexity or levels of ceremonial activity at a site. This provided an alternative explanation of artefact variability in contrast to cost effectiveness or environmental factors.

Witter, D.
Review of ‘Time, Energy and Stone Tools’ by Robin Torrence
December 1991
33
73
Book Reviews
You must be a member to download the attachment ( Login / Sign up )