Review of ‘Thinking from Things: Essays in the Philosophy of Archaeology’ by Alison Wylie 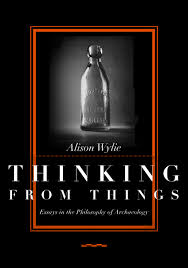 Wylie was never alone in this, with Merrilee Salmon, Jim Bell, Charles Morgan and others pushing a diversity of philosophical agendas from Bayesian probabilistic logic through to good old-fashioned positivism. There have also been archaeologists with more than a passing interest in, and knowledge of, philosophy such as Gibbon who have grappled with that wide variety of issues that have become the staples of the discourse of theoretical archaeology. Although all players have tended to focus their attention on epistemology (not surprising given all the heat about science, objectivity, relativism and authority) Wylie has branched out further than most into more explicit discussions about empowering the marginal (women, indigenes) in science, and issues more directly linked with traditional discussions of ethics in philosophy.

Very few philosophers (or indeed archaeologists who are well-versed in philosophical argument) have worked in the more esoteric (but foundational) fields of ontology and phenomenology -which has developed into a major problem for the future of archaeological theory. Notwithstanding this fact there should be little doubt that archaeology has derived much value from the limited philosophical discussions that have taken place. To this end we owe Wylie a debt of gratitude.

But is publishing a book of ‘greatest hits’ going a bit too far? True, there are some splendid papers here. Wylie’s analysis of the role of positivism in the foundations of the new archaeology is penetrating, especially if read in conjunction with the work of others (such as Meltzer) on the use by new archaeologists of ‘paradigm talk’. Equally acute is the work in Wylie’s doctoral dissertation mapping out the beginning of a love affair between archaeologists and philosophers in the 1960s. For example, archaeologists such as David Clarke finding profit in discussions with Hugh Mellor, and the impact of logical empiricist philosophy and Kuhnian concepts of paradigms and revolutions being widely utilized, if not particularly well understood. Then there were the ‘law and order’ archaeologists such as Patty Jo Watson and Charles Redman who (with Lewis Binford in his more dogmatic moments) sought to equate a scientific archaeology with one committed to hypothetico-deductive or deductive nomological epistemic strategies.

These discussions (comprising Part Two) focus on what might now be seen as historical matters, but this is an error. Given the truly parlous state of contemporary theoretical archaeology, exploring the intellectual boundaries of this period of explosive creativity can act to restore confidence in our capacity to achieve more than vapid posturing. Similarly the papers in Part Three that consider foundational epistemic issues raised by structural and symbolic archaeology, analogy, critical theory and relativism. Here we see Wylie at her best, examining claims made by archaeologists in the light of contemporary philosophical precepts. In these papers Wylie sought to assist archaeologists to find freedom from ill-understood philosophical dogmas, and outmoded understandings of the role of data and theory in science. In the 1990s Wylie’s targets shifted further away from a focus on archaeology to a broader consideration of the socio-politics of research. These issues are considered in Parts Four and Five, the latter part a discussion about archaeological ethics (especially with respect to the interests of indigenes and others).

Wylie’s philosophical journey over the past 22 years has mirrored (and in some senses helped to create) the landscape of contemporary archaeological philosophy. Certainly Wylie’s commitment to developing an ethical and inclusive archaeology, where discussions of research agendas such as feminism should not be ruled out by the application of empiricism, has done a great deal to support the work of archaeologists also committed to those agendas. However, by the same token Wylie’s philosophical interests by no means encompass all of the core preoccupations of the discipline, which have continued to puzzle, challenge and confuse.

Which brings me to a kind of answer to my earlier question. Many of these papers are to be found in mainstream venues—Wylie is no philosopher from the margins. Accordingly they are readily available outside this collection. What is new in this volume? There is an introductory essay that is a fine introduction to the essays, but it is by no means a balanced or extensive introduction to the philosophy of archaeology. Wylie has her favourite targets and examples that seem not have changed much over the years, and there is much archaeology out there that appears to have passed her by. Each of Parts Two, Three and Four have a very brief and useful introduction that situates the papers within Wylie’s broader philosophical agenda.

Thinking from Things is an interesting collection, but if it had been a book-length reflection by Wylie of her understanding of the great and important themes she explores, then there would be a more compelling reason for its existence. As it transpires I will still encourage students to read the essays as exemplars of clear and creative thinking.

Murray, T.
Review of ‘Thinking from Things: Essays in the Philosophy of Archaeology’ by Alison Wylie
2004
58
51
Book Reviews
Download
You must be a member to download the attachment ( Login / Sign up )