Review of ‘The Roth Family, Anthropology and Colonial Administration’ edited by Russell McDougall and Iain Davidson 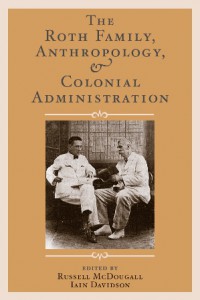 Walter E. Roth stands, in the truest meaning of the word, as a polymath: a scholar whose interests extended across a range of disciplines and with a capacity to produce work of considerable depth in each. He was a formally trained medico, whose work as an ethnographer and anthropologist, linguist, collector of material culture, historian, and senior bureaucrat, among other things, in both Australia and South America, generated material of such quality that 100 years on it is still of great value and interest to scholars in each of these disciplines. Many of us would settle for making a contribution of that kind in any one of these areas. In light of this legacy, it is incredible that during his career some doubted his abilities, intellect and application, and that he upbraided himself for wasting time. Whatever the reality, such self-perceptions and an awareness of the attitudes of others towards him, possibly engendering a low self-esteem, may in part explain his motivations and drive.

It is difficult not to be impressed by Roth’s capacities as a scholar and a person. That this dedication to research of an impeccably high quality, particularly in the areas of ethnography and the fledgling archaeology, in challenging conditions was a mark of the family as a whole is amazing. In this context, a volume devoted to Walter and his other perhaps less well-known siblings and relatives is a worthy, and some might think overdue, task. So it is easy to welcome this collection of papers that had their genesis in a conference devoted exclusively to the purpose of exploring the achievements as well as other aspects of the careers of this remarkable family.

While not forgetting the far from negligible contributions of his relatives, the breadth of the papers in this volume, covering so many facets of Roth’s career as both researcher and bureaucrat, is testament to his own catholic interests. That some can and do openly look at more challenging issues in that career, including the manner in which he used informants (notably the matter of photographing people demonstrating certain sexual positions) and his role as a Protector of Aborigines serves to demonstrate that, like all of us, Walter was a complex individual sometimes capable of allowing his own interests to overtake an awareness of, or openness to, the rights of others and that he was a creature and product of his times. Recent distasteful behaviour where shock jocks beguile mothers to question their juvenile daughters on commercial radio about their sexual experiences for the purpose of titillating a mass audience, and thereby for profit, perhaps should temper our judgement of Roth in this regard.

The central elements in Roth’s career from an Australian perspective were his time as a medical officer in remote Queensland and then subsequently as a Protector of Aborigines in the 1890s and 1900s. It was during these decades that he undertook the research for which he justly remains famous. His career at this time paralleled that of a certain Archibald Meston. In my mind, and having had some opportunity to compare the writings and attitudes of Roth and his bitter bureaucratic rival, Meston, there is little question as to who usually demonstrated the greater humanity in the carriage of his duties while also bringing to his research a disciplined mind committed to rigorous, accurate description and judicious analysis. We can reasonably compare them in the following broad terms. Meston was gung-ho in seeking to remove people from their traditional country to populate reserves often many hundreds of miles away (remembering he was the architect of that the reserve system). At the same time he sought to apply a strict economic rationalism to these reserves to keep costs down, thereby inflicting great hardship on the unlucky residents while, in the best interests of nepotism, promoting his son for office as overseer or manager of various reserves. It seems to me that, while Roth certainly did authorise removals, he was slower, at times almost reluctant to do so, and not without exploring the issue in some detail. Meston’s flights of fantasy and errors are obvious to any who have taken time to read his reports and magazine articles, while Roth continues to impress well-qualified scholars in all the areas in which he took interest.

The ongoing scrap between Roth and his nemesis played its way out in various controversies including the Keppel Island removals (a bureaucratic fight he lost), and in the sale of his collections for personal profit. It is easy to see a great jealousy seething in Meston: his bureaucratic equal, but rival, secured the plum position for which he thirsted, and then ultimately overtook him, and all the while there was Roth’s continuous, seemingly effortless production of material of a consistently high standard widely admired by the academic and scientific community. One of the great shames in all this is that it was Walter who was hounded (and at times slandered) by politicians and bureaucrats, often at the instigation of, or egged on by Meston, ultimately seeing him resign his position in Queensland and depart for foreign climes in South America. But then I observe that we will wait some time to see a collection of essays extolling the contributions of Archibald Meston.

All this and more is explored in this volume. As someone who has worked in central and western Queensland for a number of years I have always found it a pleasure to delve into Roth’s voluminous materials from these regions for some new insight. This volume nicely complements that. For others there will be other aspects to catch their interest, including an opportunity to compare colonial administrations in Australia, the Pacific and South America.

McDougall and Davidson have done a fine job editing this handsome volume. It is nicely produced in hard covers with good quality photographs, figures and maps (though the text in Figure 7.1 tested my fading eye sight). The papers generally demonstrate a confidence in handling data and a lightness of touch that mark scholarship of some depth being at play. A minor quibble: while I enjoyed reading all the papers in this volume, there were times when I had a sense that some were terminated just when they were starting to get really juicy, or that some discussion was attenuated possibly to meet a word limit set by the editors in the interests of equity. Perhaps this merely reflects my own interest in a subject having been pricked but not satisfied. However, I suspect that my frustrations will be eased on going and ferreting out some of the less accessible material these scholars have produced on these subjects. It is a measure of the value of this volume that it encourages such interest. It is also something that I think Walter and the rest of his family would wholeheartedly endorse.

Luke Godwin
Review of ‘The Roth Family, Anthropology and Colonial Administration’ edited by Russell McDougall and Iain Davidson
December 2009
69
80-81
Book Reviews
You must be a member to download the attachment ( Login / Sign up )