Review of ‘The Rocks: Life in early Sydney’ by Grace Karskens 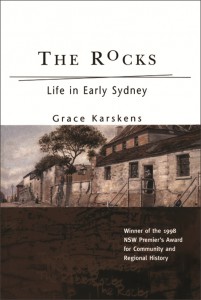 This book aims ‘to provide the first part of a much-needed history of the city’s earliest, oldest-surviving and best-known precinct, and to explore its origin and reputation’ (p.5) Further, through an examination of the Rocks, Karskens aims to expose the lives of Sydney’s ordinary people, moving beyond the stereotypes of the area as ‘Sydney’s bad place’. She makes her debt to the historical anthropology of Geertz, Deetz and Isaac clear: she is writing an ethnographic history, of people doing things, enacting the deliciously alien cultural forms of the past. As well as such indirect references to material culture, the book makes explicit claims to draw upon ‘a wealth of … archaeological evidence’ (cover blurb) and that ‘the ‘small things forgotten’ retrieved from archaeological excavations … are clues by which a human dimension may be built up, layer by layer’ (p.7). This review focuses on the role archaeology plays in the book.

The Rocks is divided into three sections dealing broadly with ‘Community and Commonality: The Growth of the Rocks as a Locale’, ‘Family Life’, and ‘Making a Living’, during the colony’s first few decades. Karskens’ essential argument is that the culture of early Sydney was preindustrial, unaffected by ‘commercialization, urbanization and industrialization’. Each chapter poses questions regarding each of these aspects of Rocks life, turns to English precedents, and then back to examine local examples. One strength of this book is Karskens’ use of documentary evidence to provide countless, richly detailed stories about real people, reconstructed from newspapers, petitions and other sources for non-elites. In ‘Patterns of Occupation’, for example, her impressive analysis of a new source, the District Constables’ Notebooks of 1822 and 1823, reveals fine-grained differentiation within the area. Clusters of like-minded people lived near each other: single women, the poor, or less predictably, ‘the group of freely- arrived settlers, including the Boultons and Hanceys, in Cumberland Street, or some survivors of the Hillsborough voyage of 1799 … Butchers tended to live in Cumberland Street, and Irish households focused on Surry Lane, the area’s oldest road’ (pp.31-2).

Where her technique of extrapolating from personalised stories to larger patterns works, it is fascinating: she successfully argues for childhood in the 19th century Rocks being very different from today (“My Children I love as my life’: Birth, Childhood, and Growing Up’). But a tension develops between her generalising aims and her individual ‘piggy- backs’. Occasionally the scale of analysis is too fine-grained to let patterns form, and several interpretations compete. For example, she wants to undermine notions of idyllic community but cannot deny evidence for caring relationships and neighbourliness, resulting in unhelpful equivocation: ‘Although the Rocks community was not characterized by the sort of constant riot or lawless mayhem that would destroy the social fabric, it cannot be described as truly peaceable’ (p.56). Often things are allowed to fall back into familiar configurations (e.g. ‘It is difficult to generalise about the nature of married relationships because they were as varied as they are today’ [p.9l]).

Of particular interest to archaeologists, Karskens locates social change within the material realm, arguing that despite the survival of traditional culture, the values of the rising generation were shaped by the hardship of convictism (e.g. p.132); the Rocks’ ‘small business people … strove for the decencies, the comforts and some of the luxuries of life, and this set them apart’ (pp.205-6). Through material culture, successful emancipists tried to define themselves as different from the lower orders. But against these local strivings, she argues that by English industrialising, middle class standards, their material (as well as moral) inferiority was clearly apparent (‘The Meaning of Respectability’ [pp.227-321). Karskens concludes that ‘it is in the material life of Rocks people that we glimpse the roots of modernity growing among older cultural practices’ (p.237).

Despite her claims to have harnessed archaeological evi- dence, there are serious problems with Karskens’s account. Almost no citation of the archaeological literature, an absence of explicit consideration of archaeological theory and method, and the gross generalisation, leaps of logic and unwarranted assumptions made regarding the archaeological evidence, indicate that Karskens has chosen to ignore difficulties facing archaeologists, rather than address them.

For example, Karskens argues that the archaeological evidence indicates a high standard of living. To historian Beverley Kingston’s question, ‘what could the demand have been … for 242-piece earthenware table sets … edged in blue and green?’ Karskens replies ‘The answer is given by archaeological evidence: ordinary Rocks people bought pieces of these sets to eat from and to embellish their homes … Images of life in early Sydney commonly comprise “degradation and poverty”, convicts dressed in rags or rough, plain clothing, eating only government issue salt pork and occupying dirt-floored wattle and daub huts. Living, in other words, ugly lives without comfort or luxury, nor the desire for it. This material picture suggests debased and brutalized people, abject prisoners of the “fatal shore”. But much of the evidence on material life runs utterly contrary to this’ (p.206).

First, Karskens’ assumption that the odd excavated sherd of edged ware is evidence for ordinary people buying large sets of tableware, indicates a lack of knowledge of archaeological methodology: such equations are refuted by a range of factors, and careful analysis is required to correlate the material record with documented processes. Second, her counter-image, involving dirt floors etc, is also well-attested by the archaeological evidence, and in conjunction with fine ceramic wares. The Chandler household, investigated during the Lilyvale excavations, was characterised by excavation director Wendy Thorp (1994:47) as a ‘mix of fine wares and what may have been fairly spartan interiors …’. Interpretation of status from material evidence is complex: some artefacts may have served as emblems of status, but others may reflect local availability, for example. More convincingly, archaeological evidence from other parts of Sydney might have been drawn upon – Ted Higginbotham’s convict huts at Parramatta speak eloquently of a miserable lack of material comfort. Between the overdrawn brutality of ‘fatal shore’ accounts and her own romanticising view, there lies a much more complex story.

Most seriously, the inaccuracies and methodological weaknesses in Karskens’ reference to archaeological evidence are compounded by her habitual use of ‘glimpses’ of material evidence to illustrate her argument. Despite the book’s repeated claims, it is founded on the assumption that material culture reflects, rather than expresses, ideology and cultural process. We are confronted again with the old problem of privileging documentary evidence over the material record, denying archaeology’s unique epistemological potential. It is ironic that Karskens chooses to locate significant change within material life yet makes no attempt to grapple with the issues of method and theory which are fundamental to these claims: What is the relationship between material and social dimensions of human life? How do we make correlations between an object (or pattern of objects) and a standard of living? The complexities of such issues have been all too apparent to archaeologists for decades (e.g. Spencer-Wood 1987). Impressionistic description of the types of artefacts found on some sites (e.g. p.207) does not demon- that the standard of living in the Rocks was higher than anywhere else, or that the owners were wealthier or fonder of their possessions.

The strength of Karskens’ account lies in the vivid stories emerging from careful scholarship which successfully thicken her description and which will appeal to all readers, specialist or not. While archaeologists will find some aspects of her argument debatable, in tackling lots of big issues, she has provided those working on Sydney’s colonial period, and in historical archaeology, with an essential reference-point for future work.

Kingston, B. 1994 Basket, Bag and Trolley: A History of Shopping in Australia. Melbourne: Oxford University Press.

Lydon, J.
Review of ‘The Rocks: Life in early Sydney’ by Grace Karskens
June 1998
46
54–55
Book Reviews
Download
You must be a member to download the attachment ( Login / Sign up )