Review of ‘The Riches of Ancient Australia’ by Josephine Flood 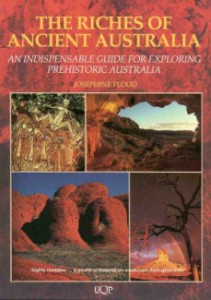 This book represents a format which has not previously appeared in Australian archaeology. It is a tourist-eye view of Australian archaeological sites. The aim of the book is not to synthesise prehistory, or to report on individual findings, so the book cannot easily be compared with any intellectual ancestors in terms of content, organisation or language. It can only be assessed on its own terms, by how well it meets its stated aims, which are: ‘This book is for Aboriginal people and others who wish to know more about Australia’s prehistoric heritage, and to visit some of the continent’s outstanding sites. It has been written to help people appreciate and see some of Australia’s prehistoric heritage places …This book gives a general introduction to the prehistory of each state and territory and then a detailed account of some selected prehistoric sites which are open to the public.’ (p.xvii).

The book begins appropriately enough with the most important parts – namely the responsibilities of visitors towards archaeological sites. As a teacher, I have often visited sites with archaeology students, and I am continually amazed by the lack of regard which a minority of people seem to have for sites and their contents. Hood has put into a concise 11 pages the dos and don’ts of site visitation, illustrated by appropriate humorous cartoons. We can only hope that people who use the book to find sites will read this chapter also, as well as the good bits about the sites. As archaeologists we are all aware of the risks involved here and we hope that the benefits outweigh them.

The selection of sites for inclusion is one of the crucial parts of the book. Flood’s background in national cultural heritage management allows her one of the best possible overviews for choosing which sites to include and which sites to leave out. It is impressive to see the number and range of sites included in the book together with a useful range of illustrations. The writing style is anecdotal, adding interest to a text which could otherwise be extremely repetitive and boring.

The format of the book will be most useful for people who wish to actually visit the sites, as most sites are described with specific directions on how to reach them, including distances, road names etc. and with specific contact names and addresses. The level of detail offered is variable. There is some inconsistency in the amount of information offered, with greater detail given for some closed sites rather than the open ones. For examples, on pp.39-41 a paragraph is given for Mammoth Cave (which is open to the public) compared with three paragraphs and two illustrations for Devils Lair (which is not open to the public).

The layout of the book is not ideal for field use, it is not a stand-alone field-guide. Other maps would be needed and it could be hard to find quickly the location of sites while travelling. The map summarizing the geographic ordering of the book (Fig. 0.1!) is useful, although perhaps some kind of graphic index (for example, a state map or patterned borders) could have been included on each of the pages describing individual regions. The book relies very heavily on text rather than illustration to convey information. Perhaps this could be rethought for a new edition, which will be essential for updating information contained here, for example, the recent changes to the Victoria Archaeological Survey.

At the nit-picking level, I am uneasy about Chapter Two beginning with five pages on the geological history of Australia. I am not sure about the relevance of this to human history and it may serve instead to strengthen the misconceptions of the general public about the co-existence of dinosaurs and people and about what archaeologists do. On a positive note, there is also at least a passing reference to Aboriginal views of their origins (p.19) as well as academic theories. (Incidentally, Fig. 2.2 is a direct reproduction of a diagram from a University of New England study guide, with no acknowledgment of the source or author of the illustration. Why is it that all the photographs in the book are acknowledged but not all the drawings?)

Flood has done a good job with this volume which is of course designed for lay people, not professionals like myself. Whether Aboriginal people will find it useful is an interesting question. Certainly the style of writing adopted by Hood is not like that commonly adopted for ‘Plain English’ reports written by archaeologists and it would be useful to hear from Aboriginal people what they think of this book The glossy volume ‘Burnum Burnum’s Aboriginal Australia – A Travellers Guide’ (Angus and Robertson 1988, edited by D. Stewart) is the only similar publication that I have come across and it relies on pictures rather than words for its message and is designed for a coffee table audience rather than as a field-guide. I think that Flood’s book will achieve its stated aims and bring Australian archaeological sites on to the  well-read tourist’s agenda.

Beck, W.
Review of 'The Riches of Ancient Australia’ by Josephine Flood
December 1993
37
72–73
Editorial
You must be a member to download the attachment ( Login / Sign up )