Review of ‘The Prehistory of the Mind: A search for the origins of art, religion and science’ by Steven Mithen. 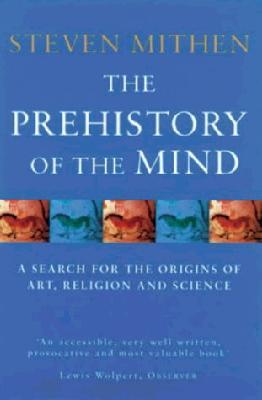 The Prehistory of the Mind unveils Steven Mithen’s ‘new theory for the evolution of the mind’ (p.7). It is a book designed to accommodate the needs of scholars – by providing extensive endnotes and references – but to otherwise remain accessible and appealing to a general audience. Students are likely to embrace this entertaining and information-packed volume with great enthusiasm. How- ever, the peers whom Mithen wants to judge his theory (p.7) may be left wondering where he put the arguments needed to link the information he presents with the authoritative conclusions he draws from it.

Chapter 1 explains why one should ask an archaeologist about the human mind, and notes that psychologists’ attempts to chart the evolution of the mind have been flawed by a naïve handling of the archaeological evidence (p.10 and see e.g. Donald 1991:205). By putting archaeology to the fore, and combining it with cutting edge ideas from evolutionary psychology, Mithen sets out his intention to realise ‘a more profound understanding of the mind’ (p.13) than would be possible for either discipline working in isolation.

Chapter 2 provides an engaging overview of the evidence for human evolution. Ancestral species toddle on and off stage carrying their props, and this very visual telling is accompanied by several tabulated summaries, maps and diagrams.

Chapter 3 outlines some of the models that have been used to describe the mind, as well as the modularity and multiple intelligence theories of Fodor and Gardner (p.33- 42). It then introduces the ‘swiss-army-knife’ model, which symbolises the view of evolutionary psychologists Leda Cosmides and John Tooby. This model has the mind composed of a myriad of specialised mechanisms or modules, each dedicated to solving a ‘specific adaptive problem faced by hunter-gatherers during our past’ (p.43). These modules are thought to reason and remember by specialised means, and are claimed to be both ‘hard-wired into the mind at birth’, and ‘content rich’ (p.43).

To clarify a point, Steven Pinker – whom Mithen identifies as an evolutionary psychologist (p.232) – describes the evolutionary view as being that the mind possesses innate mechanisms for absorbing different kinds of information (Pinker 1994:410). Pinker says nothing about innate content, so the notion of content richness comes solely from Cosmides and Tooby. Elsewhere, Mithen describes their approach as ‘extreme’ (Mithen l994:31). Yet, in The Prehistory of the Mind, he only deals with the inability of their model to explain how modem people think with such fluidity (see pp.45-50).

Mithen resolves these problems by turning to the field of developmental psychology: firstly, in search of support for the idea of innate knowledge; secondly, to find some explanation for the seemingly non-modular aspect of modern human thought. On the first count, he would have the reader believe that there is overwhelming evidence for the existence of innate knowledge (p.50). However, the evidence that he presents for ‘intuitive psychology’, ‘intuitive biology’ and ‘intuitive physics’ (see pp.50-5) refers to research findings involving three-year-old children, who have not exactly been in suspended animation since their birth (see e.g. Camaioni 1992 or any number of develop- mental psychology texts). Mithen avoids this issue completely, and simply amends the Cosmides and Toody model by factoring in the ideas of researchers who have argued for the existence of some form of unencapsulated ‘clearing house’ in the modem mind (pp.57-60). To support the notion that this aspect of the mind may develop rather than being present at birth, and thus that the mind’s evolution may have followed a similar pattern, Mithen draws upon the work of Greenfield (p.56).

The end product is Mithen’s own theory presented in Chapter4. This theory –explained using the appropriately archaeological analogy of building phases in the history of a cathedral – holds that the mind evolved in three stages. The first of these stages is said to have been dominated by an all-purpose general intelligence (the nave); whilst the second involved the addition or increased importance of discrete modules dedicated to such things as social, technical and natural history intelligence (the built-on chapels). Mithen argues that the mind as we know it did not emerge until anatomically modem humans developed ‘cognitive fluidity’; that is, the ability to access and combine information previously isolated in each of these separate modules (the walls of the chapels were breached).

The remainder of the book is dedicated to testing this new theory. Chapter 5 discusses the findings of ethological studies on primates; Chapters 7 through 9 examine the archaeological evidence. Chapter 10 seeks to clarify the relationship between the theory and the Upper Palaeolithic ‘big bang of human culture’; Chapter 11 provides an overview of the mind’s evolution from prosimian to present-day human. An epilogue – ‘the origins of agriculture’ – explains the impact of a non-hunter-gatherer lifestyle on most present day behaviour.

Because of its roots, Mithen’s theory is rather cumbersome, and at times he must go to considerable lengths to fit it to the evidence. For example, he has early modem humans drifting ‘in and out of cognitive fluidity’ (p. 183) in order to explain the anomalous presence of bone harpoons in Africa at 90,000 BP. Nevertheless, it is the issue of language which presents his theory with its biggest hurdle. Mithen cannot quite reconcile its obvious role in enabling the cognitive fluidity he describes, and which he sees firmly evidenced in human behaviour from the Upper Palaeolithic onwards (see pp. 188-90), with his belief that it arose long before that ‘big bang’. Thus, he has language appearing early in the social intelligence module (pp.140-6),and being trapped there for countless millennia. If you can believe that Middle Palaeolithic hominids were talking fluently about their social lives, whilst being cognitively incapable of putting more than two words together on other subjects (p.186), then you will probably love The Prehistory of the Mind. If not, you could always work around Donald’s (1991) archaeological whoopsies. Or better still, try the archaeologist/ psychologist double act of Noble and Davidson (1996).

Mitchell, C.
Review of ‘The Prehistory of the Mind: A search for the origins of art, religion and science’ by Steven Mithen.
December 1997
45
67–68
Book Reviews
Download
You must be a member to download the attachment ( Login / Sign up )