Review of ‘The Origins of War: Violence in Prehistory’ by Jean Guilaine and Jean Zammit 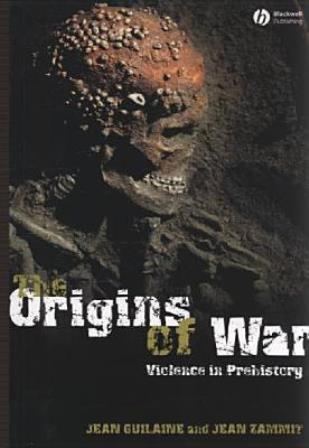 Violence and aggression have always been part of the ‘human condition’. Raymond Dart and others after him argued it has been an essential component of our pre-human, hominid ancestry (Dart 1953; Lorenz 1966), until Dart’s ideas, in particular, lost favour as the result of advances in taphonomic analysis (e.g. Brain 1981). Nonetheless, violence and aggression have long been shown as behaviours common to intergroup human relationships, manifested at the most basic level as a mechanism of defence – the protection of self, family and tribe (Morris 1969). As a consequence, any discussion of the origins of warfare, that is, ‘organized, purposeful group action, directed against another group … involving the actual or potential application of lethal force’ (Ferguson 1990:26), is of great interest to the professional anthropologist/archaeologist and the non-professional alike.

Jean Guilaine and Jean Zammit’s book, The Origins of War: Violence in Prehistory provides an insight into evidence they have studied over many years (artefacts, artistic depictions and actual skeletal trauma) that has been interpreted as manifestations of violent and aggressive behaviour from the past. The book begins with an introduction, moves through five chapters that follow a chronological order from hunter-gatherers in the Upper Pleistocene (Chapter 1), to violence perpetrated against individuals during the Iron Age (Chapter 5), and is summarised in a brief conclusion.

The introduction sets out general terms and concepts essential to the development of the argument being presented. The authors deal briefly with topics such as the ‘nature-nurture’ debate (Lorenz 1966; Wilson 1975); that is, whether or not warfare can be explained as instinct (nature) or as learned behaviour (cultural). However, their descriptions of terms such as ‘war’, ‘aggression’ and ‘violence’ are too simplistic. War is too complex an issue to be skimmed over in the way the following definition suggests:

The word “war” should be understood in its most general sense here – the sense is not one of armed conflict but rather bloody clashes between small groups, raids carried out on neighbouring parties, ambush attacks, and even individual murders (p.24).

Is this an adequate explanation of the term? The definition from Ferguson (1990) used earlier suggests not and this disparity is not adequately addressed at any stage throughout the rest of the book. For example, themes explored include cannibalism, torture and human sacrifice, topics that do not seem to relate directly to war (or its origins) by any other definition, yet come neatly within the rubric of the definition offered in the introduction.

Throughout the book subjective language tends to dilute the potency of the discussion and statements such as ‘Humans lived according to the natural resources at their disposal and were unable to progress beyond this state’ (p.82) and ‘gruesome rituals’ (p.95), suggest a lack of scientific rigour has been applied to the archaeological evidence analysed. This lack of rigour results mainly from a paucity of physical evidence available for study, and the authors do not shy away from acknowledging this fact.

For example, in Chapter 3 (2000-6000 BC) ‘The Difficulties of Making an Assessment’ (p.133) discusses problems associated with interpreting evidence as manifestations of premeditated violence (let alone warfare). As the quoted example from this subsection suggests, there are occasions where it seems the interpretations given are founded upon a very slight database:

A survey of 48 sites concluded that roughly 75 bodies, out of the approximately 2000 to 3000 bodies buried in the tombs, were injured … Thus, it is possible that less than 4 percent of the estimated total were injured (p.133).

In Chapter 5 (from approximately 4000 BC) the main theme of the book begins to emerge. By this time in antiquity, city-states began to appear, developing from the fortified towns known to have existed during the fourth millennium BC. It is during this period that certifiable evidence of war (by any definition) appears and in this chapter the authors discuss, based upon more robust material evidence, the existence of professional soldiers, armies and warrior heroes.

Despite the insights contained within The Origins of War, I read it with a growing sense of disappointment. Firstly, the broad and simplified definitions make the study indecisive toward its initial aim, the origins of war. Secondly, because the book is restricted to a discussion of evidence found in southern Europe (specifically France and Spain) it highlighted my own limitations.

Concerning the former, is the title accurate? This book is much more a discussion of the prehistoric manifestations of violent and aggressive behaviour, and this behaviour commonly existed outside the context of war, however broadly the term is defined. Is there a simple solution? Remove the first half of the title; Violence in Prehistory would seem more apt, given the material evidence and the interpretations presented.

As for the latter, this book has been translated from the original French text and as such the majority of the reference material it is based upon comes from French sources. With no knowledge of the language (and therefore no way of gauging the effect of translation on original intent), and no way to access most of the reference material, there is a real concern this review may be selling The Origins of War: Violence in Prehistory a little short of its true worth.

Brain, C.K. 1981 The Hunters or the Hunted?: An Introduction to African Cave Taphanomy. Chicago: University of Chicago Press.

Graham Knuckey
Review of ‘The Origins of War: Violence in Prehistory’ by Jean Guilaine and Jean Zammit
June 2006
62
53-54
Book Reviews
You must be a member to download the attachment ( Login / Sign up )