Review of ‘The Lost Legions: Culture Contact in Colonial Australia’ by Alistair Paterson 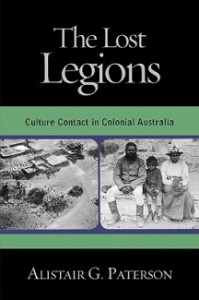 This book is a significant study of a colonial encounter in a little known (especially in America) part of Australia, the desert of Central Australia. It describes mostly sheep-keeping endeavours in the later nineteenth century, although there is supplementary material on cattle pastoralists and the twentieth century. The book incorporates both historical/documentary information and archaeological data, and aims to address both settler and Indigenous perspectives, although, as one might expect, the documentary evidence is almost all associated with Europeanderived settler colonists. It also focuses on the now-familiar issues of theoretical orientation in discussing colonialism: that the concept of acculturation and single-vector discussions of the impact of Europeans on Indigenous peoples are one-sided and allow no agency to those whose land was intruded upon and whose labour was acquired, by whatever means, to run these pastoral enterprises.

There are seven chapters in the book, with archaeological data and historical evidence each presented in one chapter. An introduction and conclusion, a chapter examining global examples of intrusive pastoral settlers, a chapter on comparisons with other Australian pastoral settlements, and a chapter that focuses on various kinds of agency in this particular case study make up the remaining portions of the book. It is an ambitious volume, but it is not entirely successful in its endeavours. Chapter 2, the global review of stock-raising experiments, contains useful insights but is too broad in scope to be effective. Perhaps a few examples targeted for specific comparisons would have been more enlightening. I liked Chapter 3, the archaeological chapter quite a bit, outlining the challenges specific to the examination of Strangways Springs, and giving the reader the basic landscape of sheep-herding in the water-deprived desert. The section of historic resources is enhanced by extensive passages from a diary and some letters written by managers of the sheep camp. These passages offer meaningful insights into the perceptions of Aboriginal people by Westerners, showing that relations were varied over time and situation.

The subsequent chapter, the ‘Texture of Agency’, enlarges on this idea and takes up the issue of the degree to which Indigenous life was altered by labour and other demands from camp managers. It also considers the crucial aspect of behaviour modification introduced by the practice of providing food rations to Indigenous workers, outlining the effect of this activity on site locations and interactions between peoples involved. I think this is the crucial issue in this work, and in others of this type. The author also suggests that the notion of landscape is the most useful concept in disentangling the cultures involved in this interaction; I think it is important to note that there would be multiple landscapes involved, for the different groups and time periods represented. It is clear that archaeology is crucial in identifying Aboriginal landscape(s). Because most of the deposits were very close to the surface and without stratigraphy, the identification of period of occupation depends mostly on the presence of European materials, but I would have liked a bit more of an attempt to consider whether Indigenous materials were always/sometimes/never replaced by European tools and equipment.

A few minor quibbles: In the discussion on diversity (Chapter 5), the author should have included assemblage size in the data provided on assemblage richness, as the latter has been shown to be dependent, often, on the former. Some of the figures throughout the book are very complex and a bit difficult to decipher, there are places mentioned in the text that are not on the maps provided and the bibliography mostly includes references prior to 2000. To balance these, there is some nice ancillary material presented on rock engravings and two brief ‘biographies’. And the issues I have outlined above do not detract from the study in meaningful ways. The book is well worth reading and provides a real contribution to colonial studies, here in a remote part of the colonial world.

Nan Rothschilde
Review of ‘The Lost Legions: Culture Contact in Colonial Australia’ by Alistair Paterson
December 2009
69
85
Book Reviews
You must be a member to download the attachment ( Login / Sign up )