Review of ‘The illusion of riches: Scale, resolution and explanation in Tasmanian Pleistocene human behaviour’ by Richard Cosgrove 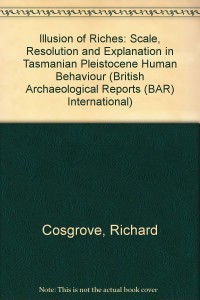 My introduction to archaeology was in 1983. Professor John Mulvaney was addressing a public meeting at the Kogarah Town Hall in Sydney, presenting the archaeological evidence for Pleistocene occupation of Tasmania and the need to protect these important archaeological sites, under threat from the proposed Franklin River dam. More recent archaeological excavations in southwest Tasmania have extended the chronology of human occupation to over 30,000 years, more than doubling the age of human occupation presented by Mulvaney at the 1983 meeting. The Illusion of Riches presents a detailed study of two rockshelters from southern Tasmania, Nunamira Cave and ORS7, with a record of human occupation spanning the Last Glacial Maximum. This work represents another chapter in the comprehensive study of southwestern Tasmanian archaeology, produced as part of the Southern Forests Archaeological Project.

Cosgrove has set out to investigate the temporal and spatial variability of human occupation during the late Pleistocene. Both archaeological and palaeoenvironmental data were considered within the framework of a palaeoecological model for human occupation and subsistence in different environmental zones.

The monograph is divided into five parts, with 13 chapters. Part 1 introduces the topic and study areas of southwest and southeastern Tasmania. Part 2 describes the study areas of Nunamira Cave and ORS7, including site formation processes, excavation techniques and radiocarbon chronologies. Part 3 presents stone artefact analyses, and Part 4, the faunal analyses. Part 5 firstly discusses the evidence, drawing comparisons between the two sites; secondly, it places these sites within a broader framework, in an attempt to explain the different artefact discard rates, the different stone raw material composition, faunal composition and assemblage profiles.

Cosgrove’s study highlights the regional variability associated with different ecological settings, and challenges the notion of ‘homogeneity’ that has been previously ascribed to Pleistocene human populations. Recognition of regional variability has arisen with the increasing number of Pleistocene sites investigated, both in a temporal and spatial sense. Cosgrove’s work is an important addition to this change in perspective. Moreover, Cosgrove challenges the use of the refugium concept for mainland arid zone sites, which, he argues is based on too few sites and little data. Inadequate time resolution and low density of cultural material create additional problems in addressing human use of different environmental zones, subsistence strategies, and acquisition of stone raw material, particularly during the Last Glacial Maximum – a period of climatic flux. In addition, different scales of analysis prove problematic when extrapolating changes observed at the continent or regional level to the ecology of localities – i.e. the flow-on effect of climatic change on flora, fauna and people.

Distinct environmental differences between the Tasmanian southeast and southwest have been highlighted by Cosgrove, and the palaeoecological model proposed for each region goes some way towards explaining the different archaeological signatures. Cosgrove acknowledges the problems associated with small sample size (the study based on one southeast Tasmanian site, ORS7), however modelling the attributes for each region provides a good foundation for testing ideas about the environmental constraints on human populations in a sub-Antarctic environment during the Late Pleistocene period.

The Tasmanian study provides an important marker in the examination of Pleistocene populations and the assumptions we make about the use of resources and landscape. The Illusion of Riches documents distinct regional variants of flaked stone assemblages, based in part on the presence and distribution of thumbnail scrapers. In light of this newly-found variation, constructs such as the ‘Core Tool and Scraper Tradition’ can be seen as no longer appropriate. Comparisons with other Pleistocene sited regions may only be appropriate in a general sense due to the variations in environmental constraints on subsistence activities, acquisition of stone raw materials and movement of people across the landscape. For example, the recent discovery of seed grinding assemblages dating to approximately 30,000 years at the Cuddie Springs site further highlights the differences in strategies of food procurement in different environmental regions.

The only criticisms I have of the monograph are the separation of the figures from the text, which means flipping back and forth through the volume, and the minimalist figure legends, which should stand alone in the information conveyed. These are only minor points. The Illusion of Riches provides another important chapter in the Pleistocene prehistory of Tasmania and Australia, and clearly demonstrates the complex and dynamic nature of Pleistocene human populations, providing further confirmation of trends identified in other regions of the continent.

Field, J.
Review of ‘The illusion of riches: Scale, resolution and explanation in Tasmanian Pleistocene human behaviour’ by Richard Cosgrove
June 1997
44
71–72
Book Reviews
Download
You must be a member to download the attachment ( Login / Sign up )