Review of ‘The discovery of the past: The origins of archaeology’ by Alain Schnapp 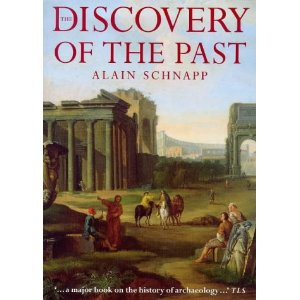 From the first sentence this book declares its purpose: ‘By what authority does archaeology exist, and how is it justified? Who benefits from its practice? And what is its purpose?’ (p.11). This search for a motivation for archaeology is not another treatment of ‘archaeology-as-hegemonic-practice’ however, but an erudite exploration of the origins of archaeology. By his own admission, Schnapp traces ‘the long route by which the curious became first antiquarians, then archaeologists’ (p.13). There are two main strands to the narrative: the origins of antiquarian practice and with it the recognition that objects could also become sources of history; the process by which the study of such antiquities was made into a science. Although Schnapp draws eclectically from a wide variety of traditions, both ancient and modem, he nevertheless manages to chart the development of a ‘relatively stable body of ideas’, which culminated in a recognisable ‘science of antiquities’ (pp.318-9). As a result, the narrative leads inexorably towards the turning point which occurred during the first half of the nineteenth century when, for the first time, natural history and human history began to be regarded as part of the same sequence.

Previous attempts to understand the antiquity of human occupation of the earth had been confined by a literal belief in the Christian chronology, which restricted the origins of humankind and of the earth itself to within a relatively recent timespan. It was only by creating a climate of understanding free of this ‘vicious circle’ (p.284) of interpretation, that it became possible for someone like Boucher de Perthes to successfully synthesise the natural and human sciences. This confluence of ideas and traditions resulted in the development and understanding of what Schnapp refers to as the ‘triangle of reciprocal relations: type, technology and stratigraphy’ (p.303), which provided archaeology with its scientific basis: ‘To think of archaeology as natural history meant that the observers of the earth had to draw on all the ‘scraps’, all the recoverable debris. This was – in contrast to the antiquarian tradition – to favour the whole in relation to its parts’ (p.311).

In the sense of discovery this book is an excellent meditation on the complex and disparate sources of knowledge which preceded, and in some senses prefigured, the European invention of archaeology. Schnapp is both Professor of Greek Archaeology and Head of the Department of the History of Art and Archaeology at the University of Paris and his classical training and art history expertise clearly infuses the structure and orientation of the text. This also limits its usefulness however, particularly in terms of the ways in which archaeology is practised outside of Europe, in non-Classical contexts. Even a cursory glance through the book reveals its preoccupation with the ‘great civilisations’ of the ancient and modem world: Egypt, Assyria, China, Greece, Rome, Europe. The artefacts of the narrative are invariably either monuments or ‘Art’ (with a capital ‘A’): the burial mound of Emperor Qin Shi Huangdi (the entombed warriors); the statue of Charlemagne; a Corinthian vase; the palace of Theodoric, king of the Ostrogoths; a painting by Rubens, Titian or Tischbein.

As a corollary Schnapp’s knowledge of these societies and with how they viewed the past is possible only because of their ability to write it down, and thus the text itself be- comes inextricably concerned with the meaning and uses of writing. When Schnapp writes (in a discussion on the European forerunners of the Renaissance): ‘The idea had been implanted in scholarly circles that the collection and decipherment of inscriptions was a valid historical pursuit’ (p.105), he is also documenting the creation of a chain of events which linked certain concepts together, as he links the words (‘scholarly’, ‘inscriptions’, ‘valid’ and ‘historical’) in a sentence. Without alluding to it, he is describing the process of elevating words and texts over objects – or at least over objects without texts – and thus the privileging of history as a means of accessing the past. Unfortunately, rather than analyse this process, Schnapp re-creates the same hierarchy, which leads him to voice a surprising opinion: ‘Archaeology is, in my view, the little bastard sister of collecting. Little, because restricted in the ways in which she can proceed and deliver; [and] bastard, because since the nineteenth century at least she has been operating from a position of denial (an archaeologist, as everyone knows, is not a collector, and archaeologists themselves are at pains to point this out)’ (p.12).

Aside from this somewhat unorthodox definition of archaeology, one of the most memorable features of this book is its accompanying illustrations, which can be read as a separate and complementary text, both emphasising key points in the narrative and providing its own. Schnapp also includes a fascinating set of appendices covering the seminal historical texts cited in each chapter. Like a microcosm of the book itself, this ‘Archaeological Anthology’ places such widely different sources as Lucretius’ first century BC text ‘On the Origins of Mankind’ and Rabelais’ preface to ‘The Topography of the City of Rome’, beside Williarn Stukeley’s description of Stonehenge, Thomas Jefferson’s notes on his excavations in Virginia and Boucher de Perthes’ mid-nineteenth century geological chronology. Not only is it worth buying for these two resources alone, but having read it, I now know where the slides for my next lecture on the history of archaeology will come from.

Burke, H.
Review of ‘The discovery of the past: The origins of archaeology’ by Alain Schnapp
June 1998
46
54
Book Reviews
Download
You must be a member to download the attachment ( Login / Sign up )