Review of ‘The City in Time and Space’ by Aidan Southall 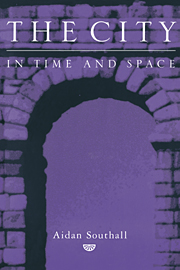 This is a book of ambitious scope: it encompasses ten thousand years of urban history ranging over the entire globe, covering in depth Sumeria, Greece, Rome, medieval Europe, China, Japan, the Islamic world, and India, and in passing many other places. At the heart of the book is a paradox: cities everywhere juxtapose splendid cultural productions with glaring poverty and deprivation. Thus places that have made their mark on the history of civilisation have also witnessed its darker side.

Given this concern for inequality and material living conditions, it is not surprising that the concept of mode of production (MOP) is the organising framework for the book. In Southall’s view, such an approach ‘economically maximizes illumination and minimizes distortions’ (p.1). As befits such a neo-Marxist interpretation, each MOP is successively and dialectically related to its predecessors, reflecting the changing nature of human society. Thus the reader is treated to a bold story that begins with an Asiatic MOP in its earliest form (Sumeria, China, the Andes and Mexico), moves on to an Ancient MOP (Greece, Rome), and a Feudal MOP (Europe), before addressing the modem Capitalist MOP (and its links to Third World and colonial cities).

In intellectual terms, the book provides a bridge between anthropological archaeology (with its study of the beginnings of cities) and contemporary urban anthropology (and its emphasis on current city life). Informed mainly by history and anthropology, the author strikes a somewhat dismal note at the very beginning of his treatise: ‘If the motive of history is to explain the present and the obligation of anthropology to empathize reflexively with the other, the last frontier of time and culture is daring to ask what we have learnt in the city to save our grandchildren from ultimate destruction’ (p.3). This mindset immediately raises the question of whether the problems that we see in the urban world today are problems of the city or problems in the city. That is to say, do the problems arise because of the nature of city life, or are the causes of problems to be found in the structure of society generally and merely more evident in cities because of the greater number of people that are present? As a social scientist, I would have liked early and explicit consideration of these questions. However I was neither surprised nor disappointed to find an emphasis on different time periods.

Discussion of the Asiatic MOP emphasises the embryonic city-state, the dominance of the central city over rural areas, and the powerful symbolism of supernatural beings. Urban concentration, in this sense, ‘was essential to the effective deployment of religio-political symbolism which facilitated the production, display and trading of luxury objects and the consumption of agrarian surplus which made the city possible’ (p.16). The Ancient MOP is seen as much less brutal and perhaps paradigmatically exemplified by Athens. Inequality was never the less pronounced with a high standard of living for a small minority (usually owners of rural land) and yet marginalisation for many, especially women. The Feudal MOP, in Southall’s view, saw migration from rural areas to cities which were the site of grand social collapse. However out of destruction came, eventually, innovation and, with this, a dualism that pitted kings and nobles (with political control) against merchants and craftsmen (with an interest in trade). The Feudal MOP was perhaps best evidenced in Western Europe where the Capitalist MOP also came into being. The Renaissance and Reformation provided a societal stimulus. Some Europeans planted the seeds of cities wherever they went and thus the beginnings of a world trade network that ultimately produced the factory system and colonial cities.

Shifts in MOPS are normally interpreted in terms of internal contradictions, the points where relations of production no longer serve to support the forces of production with a result that new forces and relations emerge. Southall goes beyond this general proposition in search of empirical evidence. He finds it often in migration as the engine of transition, exacerbating social collapse. Of course there is more to change than this and Southall notes especially the changing role of merchants: in the Asiatic MOP they were the agents of the temple and throne; in the Ancient MOP they were the agents of elite citizens; in the Feudal MOP they came into their own (for the first time becoming dominant over the lords); and in the capitalist MOP their role was magnified and transformed into industrialists and financiers.

Southall’s tale is compellingly told. If there is a part of urban history that fits uncomfortably into the book’s general model it is Asian cities. These are treated thoroughly but as something of a digression from the central theme. I learned much from the detail that Southall provides. He is certainly not afraid to make his views known in forthright terms. For example, he observes that ‘most predominantly Muslim cities and countries still face the same human and political problems they failed to solve 1000 years ago, paying lip-service to democracy and making an ugly travesty of it to deceive the people or drive them to cynical apathy alternating with fanatical fury’ (p.237). From a parochial point of view, however, I must observe that the treatment of Australia is scant, bogged down by issues of population size, and based on some misinterpretation of federal and state jurisdictions.

Perhaps the most engaging chapter is the one that takes the reader through to the present with a glimpse of the future. This is the era of globalisation. Perhaps more importantly, just as industry came to replace mercantilism so the exchange of information is likely to be more important than the exchange of goods in the city of the future. Some might see a bleak future in globalised, networked and divided cities, with increasing gaps between the rich and the poor. Southall himself is troubled by ghettos, gangs, AIDS, drugs, delinquency and homelessness. Some have less jaundiced views. For example, I suspected overstatement when I read that ‘depletion of the ozone layer now requires people in Australia to wear protective glasses’ (p.409).

Cities of the future might be very different from cities of the past. Some writers have even forecast the end of the city, paralleling Fukuyama’s end of history. After all, the traditional function of the city has been to overcome time with space, making communication easy by minimising space constraints. In contrast telecommunication works the other way around: it overcomes space with time, making communication easier by minimising time constraints irrespective of space constraints. No matter what the future might hold, urban scholars owe Southall a debt of gratitude for his broad and thought-provoking treatise on urban history.