Review of ‘The Axe had Never Sounded: Place People and Heritage of Recherche Bay, Tasmania’ by John Mulvaney 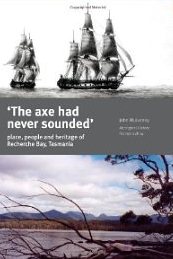 In 1989 John Mulvaney produced Encounters in Place: Outsiders and Aboriginal Australians 1606-1985 which identified 57 sites of cross-cultural encounters between Aborigines and Europeans that should be included in the Register of the National Estate. A bold, generous, well-illustrated book, published with the encouragement and support of the Australian Heritage Commission, it showed how Australians were beginning to grapple with the cultural complexities of their nation’s past.

Today, optimism about preserving Tasmania’s cultural heritage has evaporated. Cultural heritage politics is now conducted as a lopsided battle between a cabal of the logging industry, developers and Federal and State governments on one side and a cluster of heritage advocates on the other. In his latest book and possibly his last, John Mulvaney shows just how difficult the process has become in Tasmania, by providing a cultural history of RechercheBay in the state’s southeast, as part of the campaign to have it preserved on the National Heritage Register.

RechercheBay is the site of two visits made by the French maritime scientific expedition led by Bruny d’Entrecasteaux in 1792 and 1793. On the first visit a raft of ground-breaking scientific experiments were conducted and important flora and fauna collected, and on the second visit, three encounters were recorded with the Tasmanian Aborigines. However, few records of the expedition were translated into English at the time and others were lost. Its wider significance did not become apparent until the end of the twentieth century when new scholarly translations became available, along with a biography of its chief botanist, Labillardiere, who recorded the most detailed observations of the Tasmanian Aborigines and new assessments were made of the ethnographic observations. These publications not only dramatically changed our understanding of the humanity of the Tasmanian Aborigines, but also the significance of RechercheBay as a critical site of cross-cultural encounter. In 2003, when evidence of the remains of the temporary garden, established during the expedition’s first visit to RecherhceBay in 1792, was alleged to have been found, the campaign to preserve the site swept into action.

Part of the purpose of this book is to reassess the significance of the d’Entrecasteaux expedition’s textual and visual observations of the Tasmanian Aborigines at RechercheBay. Mulvaney begins this task by reviewing the expedition’s origins during the tumultuous early years of the French Revolution and its dual purpose: to search for the maritime explorer La Perouse whose expedition was last seen at Botany Bay in January 1788; and to seek ‘geographical, biological and ethnic data in the interests of learning unrelated to imperial desires’ (p.xx). He points out that the expedition attracted the most experienced naval officers in France to conduct the search for La Perouse and the best and the brightest young scientists to collect the data. Despite their obvious political differences – the naval officers were largely staunch royalists and the young scientists were ardent republicans – their French nationality and belief in the Enlightenment gave both groups similar ideas and beliefs about the humanity of native peoples.

This was demonstrated at RechercheBay, which Mulvaney explains, the expedition accidentally ‘discovered, through a compass error’ in April 1792 and revisited for three weeks in January-February 1793. During the first visit, members of the expedition recorded evidence of Aborigines in the area, but they did not make contact until half way through the second visit in early February 1793. What followed was three cross-cultural encounters which Mulvaney argues produced ‘a priceless archive’ of information about the Tasmanian Aborigines that has never been surpassed. What then did the French record, and where and how did they do it?

According to Mulvaney, the first encounter took place near Southport Lagoon on the morning of 7 February and recorded by Labillardiere, the botanist and Felix Delahaye, the gardener, who with two of the crew of Recherche, were on an overnight excursion to the northeast peninsula. The Aborigines saw them coming and drew themselves almost in a semi-circle with the men and young boys at the front and the women and children well-behind. Holding firmly to his belief that they were not hostile, Labillardiere stepped forward and offered the oldest man a piece of biscuit. He was rewarded with a dazzling smile and a hand offered in friendship which he grasped, gratefully. The rest stepped forward and according to Mulvaney, ‘peaceful relations were initiated’ (p.64). Labillardiere counted 42 people, including seven men and eight women. The rest were children and adolescents.

When Labillardiere invited his new companions to his campsite for breakfast, one of the men explained, by using unequivocal signs, that he had reconnoitered the camp during the night. According to Mulvaney, ‘neither then nor upon any other occasion were the objects stolen, a virtue stressed by the French’ (p.64). Labillardiere made several careful ethnographic observations concerning their appearance, skin, hair and body adornments while Delahaye was more interested in recording that the men had spears hidden in the long grass.

The French then demonstrated their firearms, which the Aborigines did not like, and then the Aboriginal men threw their spears at an indicated target which the French judged to be of impressive accuracy. On their return to the ship, the Aborigines cleared the track to the beach by removing dead branches, breaking off obstructions and then taking them by the arm to guide them through slippery areas. According to Mulvaney, ‘the whole group went on arm-in-arm singing’ (p.65). Both diarists considered that the Aborigines were intelligent, inquisitive, sentient human beings.

The second encounter took place the following morning near Blackswan Lagoon where Mulvaney records that Labillardiere and Delahaye, together with three naval officers, Louis Ventenat, Lieutenant Saint-Aignan and Sub-Lieutenant, La Motte du Portail, the artist Jean Piron, the naturalist, Claude-Antoine Gaspard Riche, and at least one of the crew of the Recherche, were welcomed by 19 Aborigines, who were eating shellfish beside three fires. The French happily mingled with the Aborigines. Labillardiere, Delahaye, Vententat and du Portail recorded their observations and Piron made a pictorial record of the encounter, which became the engraving: ‘Aborigines of Van Diemen’s Land preparing a meal’, 1793.

Despite Piron’s representation of the Aborigines as classical in bodily stature and the obvious inventions of background vegetation, Mulvaney considers that there is ‘a remarkable degree of realism in the scene’ (p.66). Three hearths with crayfish broiling can be readily identified together with fine examples or basketry and seaweed water containers. Seventeen of the 19 Aborigines are also identifiable, ‘although the sex of some is indeterminate’ (p.66). The probable tally, he contends ‘is seven men, five women and five children’ (p.66). Since ‘some women are seated with one foot concealing their genital area, a characteristic commented on by most diarists’, this sketch, ‘represents keen ethnographic accuracy’ (p.66). He then identifies, for the first time, each of the six French participants mingling with the Aborigines. ‘Such carefree fraternization’, he claims, ‘indicates the degree of informality and equality that typified the humanizing spirit of the occasion’. Above all, he concludes, Piron’s engraving reveals ‘mutual interest, respect, equality and informality’ (p.67).

Mulvaney believes that the final encounter probably took place on 9 February at Quiet Cove, another open area. Labillardiere, du Porteil and Captain d’Aribeau textually recorded the encounter and Piron visually recorded it in another engraving, ‘Tasmanians preparing a meal from the sea’. All these records, he argues, provide critical information about Tasmanian economic and social life. On this occasion the French recorded 10 men, 14 women and 12 children, six of each sex, gathered around 10 fires, suggesting to them that each monogamous family had its own hearth. While the French were disturbed that the women appeared to be the major food gatherers, Mulvaney notes that ‘this visual and written account of the female role in food procurement was detailed, more so than most nineteenth-century observers, who stressed the male hunting role in mainland society’ (pp.68-69). He points out that the females preparing this one meal ‘are frozen in time, as they catch and cook shellfish and crayfish. An archeological midden may be visualized accumulating from the ashes mixed with discarded shells and food debris’ (pp.69-70).

Mulvaney contends that all the observers emphasised the family as the focus of Aboriginal social life in which monogamy appeared to prevail. ‘The more the two races became acquainted, the greater the emphasis on the essential humanity of the Tasmanians’ emerged, in particular ‘their loving treatment of children, the sharing of food and their good humour’ (p.70). Such observations, he says, add ‘a significant collection to the meager store of ethnographical knowledge of contact period Tasmanians’ (p.71).

After reflecting on this momentous and friendly encounter for human history, Mulvaney concludes:

Since their arrival in southern Tasmania at least 35,000 years ago, the Tasmanians have been isolated from all outside human contact for a period between 10,000 and possibly 14,000 years. Yet their bearing surely reflected those values that are the criteria of humanity. It is not unreasonable to conclude that their ancestors brought this culture with them on their long migration. They spoke fluently and in a lively manner, communicating meaning to the French newcomers. They sang, danced, showed their trust, affection and consideration when they grasped the visitors’ arms. The French already had inferred that they had solicitude (or fear) for deceased kin in the form of cremating their dead. These were hardly the characteristics of sub-human and unintelligent savages. These distinguishing traits of conversational jollity and adaptability stamped these remote people for their French observers as fully sentient Homo sapiens, whereas many later colonists assumed otherwise (p.73).

Mulvaney certainly makes a compelling case for the significance of these observations in enlarging our understanding of the Tasmanian Aborigines. His interpretation of Piron’s etchings, in particular, offer new ways of reading visual texts for ethnographic information. Not even G.A. Robinson, who had longer interaction with the Tasmanian Aborigines 30 years later, recorded such intimate encounters with intact family groups with lots of healthy children. Although I would argue that he did accord them their humanity and did consider them to be his closest friends. Put together, both sets of observations make a powerful case not only for the humanity of the Tasmanian Aborigines but also for their potential longevity, despite their long isolation from the Australian mainland.

Mulvaney however, does not dispel Rhys Jones’s assertion that they were destined to die out. Rather he focuses on the fact that one of the French scientists, who was known to have been tubercular, appears in one of Piron’s etchings, mingling with the Aborigines. This man, he argues, could have passed on the virus to this very group, thus according the etching even greater significance as the last glimpse of a people, before their physical decline.

I would argue however, that members of this particular group could have been the progenitors of Truganini, the best known Aborigine in nineteenth century Tasmania. She told G.A. Robinson that she was born at RechercheBay, as was her father, Mangerner. Indeed their historical association with the site could have enhanced the case for its preservation. But this is a minor point.

This book not only makes the case for the preservation of RechercheBay as a cultural heritage site, it is also a call to arms to restore Australia’s position as a world leader in cultural heritage legislation. I would like to hope that Peter Garrett, the Federal Minister for Arts, Environment and Heritage, reads this book and acts to restore the National Heritage Commission Estate to its previous pre-eminent position. It would be a fitting conclusion to John Mulvaney’s illustrious career and acknowledgment of his vital role in promoting the nation’s cultural heritage.

Lyndall Ryan
Review of ‘The Axe had Never Sounded: Place People and Heritage of Recherche Bay, Tasmania’ by John Mulvaney
June 2009
68
74-76
Book Reviews
You must be a member to download the attachment ( Login / Sign up )