Review of ‘The Archaeology of Whaling in Southern Australia and New Zealand’ edited by S. Lawrence and M. Staniforth. 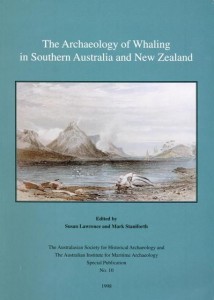 To what extent were Aboriginal people and Maori involved in the early whaling industries of Australia and New Zealand? Were shore-based whaling stations critical to the early colonial economies and to what extent did they foster the subsequent expansion of pastoralism and related industries? Can the study of this industry provide a metaphor for the early and indiscriminate exploitation of the resources of the new frontiers of these southern continents?

These are just a few of the fascinating and historically significant topics addressed in a collection of papers dealing with the archaeology of shore-based whaling stations in southern Australia and New Zealand. The papers were presented at a two day whaling conference hosted by La Trobe University in 1997, which also gave rise to a collaborative project known as the Archaeology of Whaling in Southern Australia and New Zealand (AWSANZ). The papers are organised under three sections: regional overviews of whaling research, case studies and thematic studies. Although pelagic whaling was of greater importance to the early colonies, the majority of the archaeological residues associated with whaling are to be found at the shore-based whaling stations and it is on these that the volume focuses. Whaling has been described as Australia’s first primary produce and it is relevant to note that it was the highest earning export commodity until the 1830s.

This collection of papers and the AWSANZ project, more generally, seeks to integrate the approaches of maritime and terrestrial archaeology. By synthesising data across the two countries and explicitly adopting a regional and comparative approach, a number of key issues can be addressed for the first time. Lawrence focuses on questions such as the extent to which technology changed and why; how whaling stations were structured socially in terms of status, ethnicity, and gender relations; the extent to which spatial organisation and material culture acted to delineate and reinforce these structures; the extent to which shore stations acted as a stimuli for European settlement and colonisation; and the conditions under which they operated, and how these implications were played out in local contexts.

The volume is extremely well produced with crisp and well formatted artwork and plates. Only a small number of typographic errors were noted (pp.24, 62, 73, 98 and 111) and the overall style of expression and development of themes is clear and consistent. This special publication represents an excellent platform from which to launch the AWSANZ project, articulating a number of future research directions for whaling research across the Tasman.

The volume is entitled The Archaeology of Whaling … and it is here that comment has to be made on the quantity of research presented which might be accurately termed archaeology (be it maritime or historical). Only several of the papers provide detailed physical descriptions of either the survey or excavation of shore-based whaling stations or an interpretation of the behaviours that may have led to those structures and assemblages. By far the greatest volume of discussion is focussed on historical sources and their synthesis with reference to whaling activity, generally, and to shore based features, specifically. Lawrence acknowledges the need for further detailed survey and especially excavation when she notes of planned work in Tasmania (p.112):

This is the first phase of a multi-season field program that will eventually involve excavations at shore stations in several regions of Australasia studying in detail sites from a variety of regions we will be able to approach the analysis from the comparative perspective that is required, and the data amassed will also be comparable with the existing data from the previous excavations at Thistle Island … and Cheyne Beach and Bathers Bay …

Part One provides regional overviews with papers on the whaling industry of New South Wales and Norfolk Island (Gojak), shore-based whaling in Tasmania (Nash), whaling sites in Victoria (McKenzie), whaling and shipwreck sites in Victoria (Anderson), the history and archaeology of whaling in Western Australia (Gibbs), and shore-based whaling from New Zealand (Prickett). Part Two offers case studies including whaling sites on the West coast of South Australia (Staniforth), whaling at Wilsons Promontory (Lennon) and shore whaling sites of Banks Peninsula, New Zealand (Jacomb). Part Three introduces thematic studies including a description of the holdings of whaling material at the National Maritime Museum (Miles), the demise of the British Southern Whale Fishery (Chatwin), shipping data of relevance to Australian whaling (Pearson), sealing and whaling seascapes (Stuart), conflict in Tasmanian Bay whaling (Kostoglou) and an integrated approach to the archaeology of whaling (Lawrence). While most of these papers make a valuable contribution to an increased appreciation of the historic, economic, technological and perhaps behavioural contexts within which whaling was carried out, a number stand out as making important contributions to new directions in archaeological research of whaling sites.

Gojak explicitly addresses the need to develop an intellectual framework for the further investigation of whaling sites. He discusses how archaeologists might identify the material signatures of entrepreneurial capital and the role that whaling played for entrepreneurs. The nature and degree of involvement of indigenous crews is highlighted with fascinating insights on the role and conditions of pay for such crews. This is a recurring theme throughout the volume for both Australia and New Zealand. The nature of labour supply to these remote operations is highlighted as is the need for further survey and excavation.

Detailed case studies by Staniforth and Jacomb, on shore- based settlements located in South Australia and New Zealand, provide accurate plans, discussion of excavations and most importantly assessments of the subsurface potential of these sites with a view towards future research-oriented excavation. The need to consider the cultural construction of seascapes when adopting a landscape approach is convincingly argued by Stuart.

The most exciting work in my mind, however, is the study by Gibbs who establishes the social and economic contest of whaling operations in the Southwest through the use of archival sources and then deliberately turns to the archaeological record to address a number of fine-grained questions focussing on the common locational aspects of whaling sites, the organisation of such sites and importantly the reconstruction of lifeways at the Cheyne Beach whaling station, including the recognition of a family group occupying the station. This can only be achieved through the systematic and large scale aerial excavation of a domestic processing area and the recovery of associated assemblages. The research rationale, use of historic sources, general landscape modelling and interpretation of recovered assemblages is quite outstanding. Gibbs (p.47) highlights the need for further excavation at this site and concludes:

… in the greater sense the success of AWSANZ as a cooperative project will depend on ensuring the availability and compatibility of historical, survey and excavation data. From this we can then hopefully make connections between areas and extract larger patterns in the organisation and operation of shore-based whaling in Australia, Australasia and beyond.

I return to some of the questions posited at the beginning of this review. To what extent were Aboriginal people and Maori involved in the early whaling industries of Australia and New Zealand? From these papers it would seem they were involved significantly, and in a manner and fashion that may have been quite different to the other industries which followed. There are a number of references to equal pay and conditions for Aboriginal people. Maori apparently comprised the majority labour force at a number of stations and they held supervisory positions. Were shore-based whaling stations critical to the early colonial economies and to what extent did they foster the subsequent expansion of pastoralism and related industries? It is clear that shore-based stations underpinned a number of early colonial economies and either facilitated the spread of pastoralism or provided rents which fostered existing leases. Can the study of this industry provide a metaphor for the early and indiscriminate exploitation of the resources of the new frontiers of these southern continents? Arguably, yes. The industry was unsustainable and brutal on both the pursuers and their prey.

As such shore-based whaling stations represent significant cultural sites the study of which Lawrence (p. 114) notes ‘ . . . has the potential to get behind the myths about whaling stations and to challenge constructions of them as white, masculine, inconsequential spaces’. I highly recommend this volume to all archaeologists with an interest in early colonial maritime systems.

Veth, P.
Review of ‘The Archaeology of Whaling in Southern Australia and New Zealand’ edited by S. Lawrence and M. Staniforth.
June 1999
48
60–61
Book Reviews
Download
You must be a member to download the attachment ( Login / Sign up )