Review of ‘The Archaeology of Time’ by Gavin Lucas 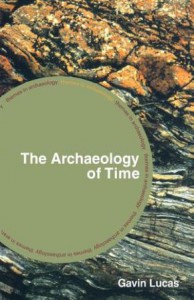 The concept of time is of substantial consequence in contemporary debates in archaeology whether we acknowledge it or not. It underlies how we do what we do, for it is the very nature of our discipline to understand the void that exists between ourselves and the subjects (or objects) of study. To this end Lucas’ book is timely because it complicates the notion of time as it relates to archaeological theory and practice, presenting a coherent series of arguments that work over some old ground as well as developing much that is new. It is also valuable because it is the most recent in a fairly limited number of books that have attempted to come to terms with the problems associated with time and archaeological interpretation (Gosden 1994; Knapp 1992; Murray 1999).

The first chapter sets out to examine taken-for-granted assumptions about time in archaeology. This consists of an argument against the uncritical use of chronology as the sole temporal framework that archaeologists use to explain change. He suggests that chronology is not a universally held conception of time and that a reliance upon chronological temporal frameworks results in inherently singular and linear interpretations of archaeological change. Such approaches simplify the past and limit the possibility of understanding historical processes operating over different scales and durations. He reviews several alternatives to chronological (i.e. linear) temporal frameworks including Annales and non-linear dynamics which do not abandon chronology as such, but replace a linear conception of time with the well-established idea of temporal rhythms. That is, different historical processes have their own tempo or pace which perate over particular durations.

In Chapter 2 Lucas reviews some of the ways that archaeologists see time in relation to the archaeological record. A number of important themes are explored here: the temporal characteristics of the archaeological record (such as ‘the Pompeii premise’), palimpsests and timescales, time perspectivism, and temporal structures of archaeological narratives. Indeed, it is a dense chapter that covers a great deal of ground. In particular, Lucas is critical of the idea that the archaeological record is a snapshot or frozen record of past cultural systems; he convincingly argues that archaeologists are not above or outside history, but instead that we engage with and interpret it and it is therefore inseparable from our present. This idea is similar in form to arguments first popularised by Shanks and Tilley (1987) and it is clear from Lucas’ work that they have aged well. Lucas also rejects the popular notion of palimpsest as a simple layering of events in place of a more complex view whereby they are construed as multiple overlapping events of various duration, and which have different impacts on the archaeological record. Even the concept of time perspectivism, an approach commonly advocated by some (Bailey 1981, 1983; Fletcher 1992; Knapp 1992), is criticised, for although there is recognition of multilayered temporal processes operating at different scales, time perspectivism is still reliant upon an essentially linear, chronological framework. As would perhaps be expected, the final verdict is for a more complex approach to archaeological narratives and while he suggests that a linear framework has merit, it should also be open to the possibility of temporal disruptions and dislocations.

Chapter 3 investigates how societies in the past perceived time. Lucas argues that one way of getting at this through archaeology is to look at how past societies engaged with remains from earlier periods. Here he is specifically talking about artefacts or objects, and the ways these were reused and reinterpreted. This discussion would have benefited by including consideration of how material remains other than tools or implements influenced the activities of people in the past. For example, in a hunter-gatherer context how did evidence of previous use of areas (such as shell middens, rock art motifs, or artefact scatters) play out in the way people interacted with these places?

The fourth chapter entitled ‘The Life and Times of a Roman Jar’ is a case study incorporating many of the arguments proposed in earlier chapters. The choice of a fairly nondescript artefact such as this is an interesting one because it reinforces his claims for the importance of critical engagement with the notion of time at all levels of archaeological interpretation. He argues that the jar is representative of two different sorts of temporalities. Firstly, it represents a chasm between ourselves and the past which is breached by chronology, in a sense by placing the item into our linear conception of time. This, he suggests is how we connect with the past. Secondly, he considers what he terms the jar’s ‘age profile’; that is, its temporality as perceived by the people who made and used it. Consideration of this question helps us to almost engage with the artefact as if we were engaging in a dialogue with an informant. For Lucas, there is no need to reconcile these two approaches for he argues it is in our interest to draw upon both temporalities.

The concluding chapter makes the point that archaeologists need to reconsider the problem of time in archaeology through a rethinking of the nature of the discipline itself. To this end, Lucas presents a fascinating argument for the uniqueness of archaeology as a discipline (compared with history or anthropology) which while oriented around material culture and temporality, is not necessarily strictly chronological in nature. It is instead a mode of temporalisation, whereby we do not ‘excavate time’ but instead we create it by firstly alienating ourselves from the past only to then restore this disjunction through archaeological narratives. The discipline is about ‘stitching up’ tears in our temporal continuity between the past and the present and in this sense archaeology is a tool in maintaining our own identities. From this he raises some significant questions about the role of archaeology as a Western hegemonic discourse and asks whether this is in fact what defines the discipline.

For an audience of researchers focused on Australian archaeological problems the book will be lacking in several areas. Most glaring is that it does not deal with the specific challenges of hunter-gatherer archaeology, instead preferring to draw on European post-Neolithic examples. Another limitation is that it only sporadically considers the problems of using ethnography in archaeology, or how his arguments are implicated in contexts where rich documentary sources are available. However, the most significant limitation of the book for this reviewer is that it has not dealt in any substantive way with the methodological and theoretical contributions of the Annalistes to the problems of time in historical explanation, and whose work clearly has significant implications for archaeology (e.g. Bailey 1981; Burke 1990; Hodder 1997; Knapp 1992).

These issues aside, all-in-all Lucas presents a clear, well-written and logically structured book which is intended to be read from start to end rather than as individual chapters. It is clearly aimed at advanced undergraduates, postgraduates and practicing professionals rather than people who are new to archaeology or archaeological theory. Sadly, Lucas’ book will probably not cause much of a ripple on the Australian pond where theory and method are not nearly as close allies as they are in the United Kingdom. Nevertheless, it does raise some important issues for consideration by those who are concerned about the political and philosophical motives of the discipline, and the practical problems of ‘doing archaeology’ in Australia.

Hodder, I. 1997 Interpreting Archaeology: Finding Meaning in the Past. London: Routledge.