Review of ‘The Archaeology of the Aru Islands, Eastern Indonesia’ edited by Sue O’Connor, Matthew Spriggs and Peter Veth 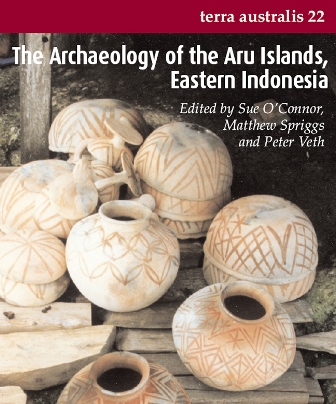 The Aru Islands are situated southwest of New Guinea and are a part of the Maluku province of Indonesia, comprising several island groups. This compendium presents a synthesis of recent geomorphological, geological, environmental, archaeological, ethnographic, zoological, oesteological and historical research providing a record of human occupation on the Aru Islands from around 28,000 BP to the present. Recurring themes throughout the volume include: isolation and insularity around the time of the terminal Pleistocene and its impact on endemic biota; increasing evidence of trade and exchange in the last thousand years with the introduction of several exotic domesticated species such as dog, pig and deer; and the significance of the islands in understanding Pleistocene human migration pathways into Sahul.

The wide-ranging introductory chapter by Spriggs, O’Connor and Veth places the Aru Islands in their palaeoenvironmental and contemporary geographical and biogeographical contexts. During times of low sea-level the Aru Islands were situated on the western margin of the Torresian landbridge which connected Australia and New Guinea. These connections are reflected in the contemporary and fossil fauna of the islands. The Aru Islands are therefore ideally situated to contribute to understandings of the settlement and occupation of Australia. Across three field seasons the research team located and excavated two stratified Pleistocene rockshelter deposits on Pulau Kobroor, documenting continuous occupation of the islands throughout the marine transgression as well as a rich record of cultural shifts and environmental change. This chronology was complemented by the excavation of a late Holocene midden on Pulau Wamar that included a ceramic component.

Hope and Aplin (Chapter 2) use a range of techniques, including oxygen isotope analysis of foraminifera, palynology and analysis of excavated faunal assemblages, to construct a five-phase palaeoenvironmental sequence spanning the last 28,000 years. Each phase is characterised by changing suites of fauna, climatic transitions, demographic restructuring and/or shifts in subsistence strategies. The last 1000 years (Phase V) for instance is characterised by increasing marine specialisation, a decline in terrestrial resource exploitation and the introduction of several exotic mammal species to the islands.

Aplin and Pasveer (Chapter 3) report the analysis of the faunal mammal assemblages from the limestone rockshelter excavations at Liang Nabulei Lisa and Liang Lemdubu. With a total of 29 mammal species represented, the faunal assemblage represents a ‘complex admixture of open and closed and wet and dry’ (p.60) species. The analysis documented mammal species that have not previously been recorded on the Aru Islands and also the absence of several extant species. The authors characterise the Aru Islands as being on the edge of a biogeographical boundary with the faunal assemblage reflecting the impact of climatic change on endemic species.

Field surveys documented a rich archaeological record with 31 sites recorded, including pre-and post-European contact places and an historical archaeological record commencing with initial contacts with the spice trade (Chapter 4). The earliest historical site recorded is the ruins of Ujir (Chapter 5), a remnant pre-European fort possibly dating to the fifteenth century, left over from the rich spice trade. Ujir is an outstanding example that provides evidence of a complex history of trade predating the European expansion into the region.

Specialised analyses of the main classes of material recovered from each of the three excavations are presented, including a pottery sequencing, sourcing and typological study recovered from the mid-late Holocene site, Wangil Midden (Chapter 6). Peter Hiscock complements the data set with an analysis of the lithics from two Pleistocene cave excavations (Chapter 10), drawing parallels with artefact assemblages in northern Queensland. An excavation report, including stratigraphy, sediment matrix and features, is provided for Liang Nabulei Lisa (Chapter 7) and Liang Lemdubu (Chapter 9), with bone artefact analsyis (Chapter 11) and interpretation of human skeletal material (Chapters 8 and 12).

With only a limited sample the editors have succeeded in synthesising a broad swathe of current knowledge to illustrate the rich archaeological potential of the Aru Islands. With an emphasis on trade and exchange, cultural adaptations to environmental change, palaeo links to Australia and New Guinea, historic Aru Islands and the spice trade, this work provides insight into the role of the Aru islands and the Arafura plain in the migration pathways between southeast Asia and Australia.

Dan Rosendahl
Review of ‘The Archaeology of the Aru Islands, Eastern Indonesia’ edited by Sue O’Connor, Matthew Spriggs and Peter Veth
December 2006
63
67-68
Book Reviews
You must be a member to download the attachment ( Login / Sign up )