Review of ‘The Archaeology of Drylands: Living at the Margins’ 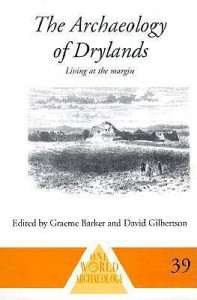 I looked forward to The Archaeology of Drylands, expecting a set of papers that might offer a fresh comparative perspective on desert archaeology. However the title is misleading. This volume is exclusively about dryland agricultural systems, mainly those in the Northern Hemisphere. Of the 18 chapters, none consider dryland hunter-gathers, only four chapters present case studies from the Southern Hemisphere, and there is no coverage of the major deserts in the south: the Namib, Kalahari, Australian deserts, Atacama or Patagonian deserts. The Archaeology o Drylands arose out of a symposium at the World Archaeological Congress, in Cape Town in 1999 and never quite transcends the feeling that this is a conference proceedings, minimally repackaged.

What the book does offer is a strong series of case studies on floodwater agricultural systems in North Africa, the Middle East and in central Asia. This reflects Barker’s own strong research interests in this topic, honed in the UNESCO Libyan Valleys surveys. A sense of catastrophic environmental change is evident in these areas: the remains of ancient and sophisticated agricultural systems and urban settlements occur in what appear to be dead landscapes today. What happened? Barker and Gilbertson take aim at the idea of desertification – in particular at the notion that desertification (either climate change or human-induced environmental change) was responsible for the collapse of these agricultural systems. Rosen looks at the Negev Desert. In the 6th century AD, extensive agricultural terraces captured run-off from local wadi systems so successfully that the region exported olives, wine and pomegranates to the Roman Empire. Rosen argues that the system was relatively stable and collapsed only when the Mediterranean economy, and the market for Negev produce, collapsed with the decline of Roman administration. This is a theme that runs through much of the book. Barker presents an overview of the gradual intensification of water harvesting structures – walls, channels, cisterns, and terraces – in the Wadi Faynan in Jordan from 6000 BP. Here, increasingly sophisticated systems of water control offset greater aridity in the late Holocene, together with an expansion of farming into the wadi systems where floodwater could be most effectively captured. Newson argues that the expansion of agriculture into the al-Harra, the Syrian Black desert, was a direct consequence of political and social changes imposed by Roman imperialism. In Turkmenistan, Nesbitt and O’Hara outline the expansion of agriculture and pastoralism in the region, from flood-out areas on the margin of the Kara Kum desert (such as at Jeitun), to more intensive use of the piedmont of the Kopet Dagh Mountains, and finally irrigation agriculture in the desert oases (such as the famous Merv oasis). They suggest a correlation between increasing population growth and urbanism, increasing sophistication of agricultural technology, greater diversity of crops (including salt tolerant crops) and increasing centralisation of authority – until the system was destroyed during the Mongol invasions. Like many of the papers in this volume, it is Boserup rather than Malthus whose shadow lays over the analysis. One exception is the paper by Mattingly, which presents a history of Saharan oases in the Libyan Fezzan, where the Garamantes developed a powerful desert state. The story of Fezzan agriculture is one of ever-more sophisticated strategies to extract enough groundwater to maintain the system, as the water table progressively dropped through over extraction.

As a set, this cluster of case studies amplify the themes outlined by Barker and Gilbertson at the beginning of the volume: that dryland agricultural systems are often very resilient; that there is overall similarity of the techniques used to harvest and manage water, especially flood-water; and that these systems are not simply tailored to their environment but reflect the outcome of a range of social, political, and economic factors. They argue that dryland agriculture involves ‘living at the margin’ of wider economic and political systems and that this is a stronger determinate of the sustainability of dryland agricultural systems than the fact that they are ‘on the edge’ environmentally. There are few reasons, argue Barker and Gilbertson, to believe that long-tern environmental change or human-induced land degradation (both of which occurred) played a central role in the abandonment of these systems.

The other papers in this book from sub-Saharan Africa and the Americas, seem poorly integrated into the rest of the volume, unless they are included simply to illustrate something of the diversity in dryland systems. One factor that links this second set of papers is that they are concerned with subsistence agriculture, whose fortunes are more closely tied to environmental conditions than markets. If this is a counter argument to Barker’s main themes, it is not explicitly addressed. Sutton looks at relict field systems in Maasailand and concludes that strong environmental limits to agricultural expansion in this area, combined with population growth and climate-driven hydrological decline, led to abandonment of the system by AD 1700 AD. One of the features of intensive agriculture in African drylands is that it is very patchy in time and space. Kinahan, in one of the more original papers, looks at agropastoralists in southeast Botswana and concludes that such disequilibrium is fundamental to the overall sustainability of these systems. Local (or even regional) agricultural collapse and abandonment serve as a sort of fallow that sustains the wider system. Minnis looking at dryland agriculture in the Sonoran and Chihuahuan deserts in southwestern USA seems inclined to a similar conclusion. Dryland agriculture systems are resilient and opportunistic: subject to decline and local environmental degradation but able to regenerate.

The most unexpected additions to a volume on dryland agriculture are two papers on Europe – one on Switzerland (that well-known desert), the other on the Rhone valley in France – and one on the eastern highlands of Zimbabwe where the local rainfall is 750-1200 mm pa. This is stretching the concept of drylands somewhat and reveals the strong concern of the editors with water management systems rather than desert environments per se.

In Australia, I expect this book will be of most interest to archaeologists and historians researching dryland agricultural systems and to scholars more broadly interested in the comparative archaeology of drylands. At $264 the book is a fairly specialised buy and it mainly destined for university libraries. It is not systematic enough in coverage to be of value as a university text, and the production values are too low for it to be an attractive book, bought solely for the appeal of desert landscapes.

Smith, M.
Review of 'The Archaeology of Drylands: Living at the Margins'
2003
56
62–63
Book Reviews
Download
You must be a member to download the attachment ( Login / Sign up )