Review of ‘The Archaeology of Difference: Negotiating Cross-Cultural Engagements in Oceania’ edited by Robin Terrence and Anne Clark 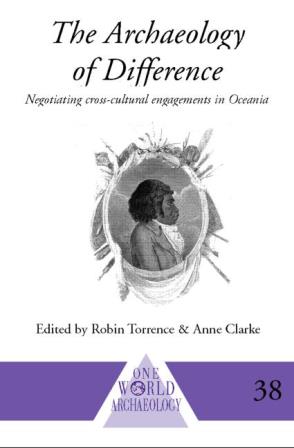 The Archaeology of Difference: Negotiating Cross-Cultural Engagements in Oceania edited by Robin Terrence and Anne Clark. One World Archaeology 38. Routledge, London, 2000. i-xviii, 418 pp., ISBN 0 415 11766 6 (hbk).
The One World Archaeology Series is ‘dedicated to exploring new themes, theories and applications in archaeology from around the world’ (Hall, Stone and Thomas). This book is true to this aim, although its long gestation period [publication in 2000 following an initial Australian Archaeology Association conference session (in 1992) and a session at the World Archaeology Conference 3 (WAC 3) in New Delhi (in 1994)] means that the ‘newness’ of some of the themes could be challenged. However, these papers do provide fresh perspectives on the culture contact period, in the recent past, a subject which has been woefully underrepresented in previous Australian publications.

While the book is described as Oceanic in application the focus is biased towards Australian studies. Eight of the chapters deal with Australian locations covering a broad geographic spread from the Top End through the centre to the Murray River in South Australia to Sydney and the NSW South Coast. Internationally, there is one paper each from Chuuk, Papua New Guinea, New Caledonia and New Zealand. There are multiple encounter agencies across the twelve case studies encompassing explorers, missionaries, pastoralists, traders: colonisers and Macassans. The multiple political outcomes that represent the current end product of colonialism across Oceania highlight human universals in a range of political and social systems functioning in very different environments.

Chapter 1 provides an extensive critique by Torrence and Clark of the issues and theorising of the processes of culture contact, encounter and engagement, teasing out the theoretical implications and the ramifications of the collection. An important aspect to emerge from the papers is that the social, political and economic trajectories initiated by the various forms of contact/encounter/settlement continue to the present. This point is of particular relevance to the spate of archaeological studies currently being spawned by Native Title deliberations, where ‘continuity of tradition’ is one of the legal tests for native title rights.

Many of these papers deal with the use of ethnohistoric and historic data in archaeological studies of encounter. More than a few find this data lacking (eg. Sand in New Caledonia, Chapter 3), or that there is a significant disjunction between archaeological and non-archaeological evidence. So often the patterns identified soon after contact result from irreparable changes wrought in the various societies by that contact (e.g. by introduced disease), making initial observations fraught with social change and demographic flux. In New Zealand, Phillips (Chapter 4) finds that the combination of ‘complementary, contrasting and sometimes contradictory’ evidence enabled a more sophisticated interpretation of the early contact period.

These studies deal with the archaeology of the recent past, and many wrestle with the difficulties of theorising this short time period. Certainly most archaeologists, by which I probably mean prehistorians, deal with patterns of change over much larger time periods to the extent that the scale of endeavour is rarely that of the social group, let alone of the individual. Because the time scales involved are more immediate, at most, the last 500 years, the processes are almost tangible. As pointed out by Torrence and Clarke (Chapter 1), these papers form a new set of approaches partly because they are situated in the historic time period but have evolved largely from a prehistoric perspective.

The fact that a number of the studies cross the usual boundary between historic and prehistoric archaeology demonstrates changes in the practice of academic archaeology, much of this driven by changes in attitude to cultural heritage management with increased power of government agencies and Aboriginal communities in the direction of research projects (see Colley, chapter 10). Such changes demonstrate a broader trend in Australian society, viz. that such approaches are being legislated.

The role that indigenous players have in the processes of encounter/contact affects how the outcomes are interpreted. A number of the studies here show that historical data can be reinterpreted when the processes of a negotiated outcome are considered (Frederick, Chapter 11; Torrence, Chapter 5). Frederick’s paper very persuasively demonstrates how the restructuring of the graphic system relates to changes in the social landscape at contact and that this was a determining process in the brokering of new outcomes. Torrence’s study, which focuses on the production (rather than the consumption) of trade goods over a longer period of time, also demonstrates the active role that Admiralty Island spear makers took in facilitating on-going trade relationships. Birmingham’s analysis of Killalpaninna Mission (Chapter 13) reassesses the relevance of dominance-resistance theory and demonstrates that negotiation between Lutheran and indigenous parties was fundamental to every aspect of social interaction.

Several studies reveal how the direction of research is altered fundamentally when the interests of the indigenous community are considered. Clarke’s work on Groote Eylandt (Chapter 6) was originally designed as a traditional exploratory project in an archaeologically unknown region, yet transformed into the archaeology of cross-cultural encounter following community input. As well as identifying how difficult short-term culture changes might be to identify in the archaeological record Clarke’s work stresses the ongoing nature of cross-cultural encounter. In their study of the Swan Reach site, Hemming et al. (Chapter 12) reveal how archaeology can be used to assist in the interpretation of oral history, archival research and anthropological information resulting in a mutually beneficial outcome to both Aboriginal community and archaeological researcher.

Both Mitchell (Chapter 7) and McBryde (Chapter 9) view exchange as a social mechanism which fulfills broader social agendas than first seems apparent. The movement of foreign items of material culture is seen as not necessarily related to the (apparently) “mundane” nature of the items in question. The use of exotic exchange items, in this case guns, to mediate disputes is demonstrated in the Coburg region (Mitchell), while McBryde establishes that the bartering which took place in the Sydney region at first contact could be seen as equally beneficial for both sides in terms of ongoing social and political relationships.

The paper by Bird Rose (Chapter 8) is somewhat outside the mould of the other case studies in that it does not depend on archaeological evidence, but rather deconstructs anthropological evidence and Jesuit diaries. It is an evocative portrayal of cosmological collision between the two cultures. Rainbird’s study of Chuuk Lagoon (Chapter 2) reveals how continuing processes of encounter and culture collision, can be revealed in the archaeological record.

I enjoyed this book and found it thought-provoking and useful. In the Native Title era, where applied archaeology is being asked to provide evidence about the ‘the transformative and recursive relationship between indigenous peoples and outsiders’ (p. 28), this set of papers provides the readers with a focussed set of issues and archaeological resolutions.

The test of an evolving theoretic construct in archaeology is that new approaches become practice and novel approaches become the norm. Several of the papers engage quite comfortably with Indigenous narratives of time, land and history. Such an archaeological approach, even in the not so distant past, when the quest for the earliest and deepest evidence prevailed, has not always been routine. It is becoming so, however, in a slow-moving paradigm shift within the discipline. The mandated involvement of local indigenous communities in the conduct of research also provides a regional innovation in method “and theory. Practice does eventually make theory in contemporary archaeology.

This book provides an informed and stimulating set of papers. It is well edited and well produced with very few typographical errors. At $237.60, most students will probably find it a luxury but to practitioners it should be considered a vital additional to the reference collection.

Jo McDonald
Review of ‘The Archaeology of Difference: Negotiating Cross-Cultural Engagements in Oceania’ edited by Robin Terrence and Anne Clark
June 2002
54
65-66
Book Reviews
You must be a member to download the attachment ( Login / Sign up )