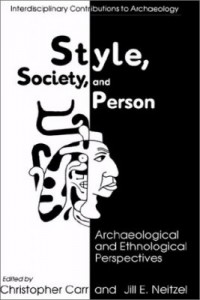 ‘Style’ has for long been a widely employed conceptual tool in archaeology. Its embeddedness in both time and space has encouraged research programs too numerous to list. Many stylistic analyses have aimed at elucidating regional cultural dynamics.

As an analytical concept, however, ‘style’ has been a double-edged sword. We all seem to know what ‘style’ means, while at the same time few researchers even attempt to explicitly define the term. Most of us use the word to mean ‘a way of doing things’, while at the same time acknowledging that complex social and psychological processes are also implied in the ‘choice’ of stylistic conventions. Some researchers even refuse to use the term, given its various possible interpretations and connotations. Consequently, ‘style’ has been both an extremely useful and widely used analytical tool, and a railroad to analytical dead ends. Style, Society, and Person is an explicit attempt to overcome this dilemma by systematically linking material style to social process via middle range theory and research.

As the Preface notes, ‘the primary aim of this book is to integrate many of the diverse current and past understandings of material style’ (p.ix). This is accomplished through the authors’ belief that ‘integration and coexistence of diverse theories of style, rather than their unification from some single perspective, appears to be the most logical and productive approach for studying style at this time’ (p.4). Despite these convictions, the book is built around Carr’s long Chapter 7, the principle aim of which is to build a middle range theory of material style, a cookbook approach linking form to process. In doing this, a repeated ‘theme’ of this and many other chapters is a refusal to accept the higher level theoretical frameworks of authors who have argued for the historicity of decision making and choice, and for the centrality of power relations and power systems in cultural and social strategies (e.g. papers in Conkey and Hastorf 1990). These workers have shown that history and power are crucial to understanding style as a social construction. Carr, significantly, underplays such insights here. Consequently, while Carr presents useful glimpses of the links between social process and material expression, one gets a (perhaps too) positivist approach that focuses overmuch on style as an adaptive mechanism. This, despite the promised broader approach of both Carr’s ‘Unified Theory’ and the book as a whole.

Having said this, the book makes a number of interesting and important observations. There is the proposition that levels of visibility of material items have different message bearing potential. For example, knowledge of weave patterns and coil directions in textiles, or paint mixes in rock art, or tempers in pottery, are poorly visible material traits. They are therefore more likely to have been formally learned in teacher-student contexts than passively learned during casual interaction of distantly linked groups of people. As social distance and close interaction decrease, stylistic attributes of low visibility are also likely to diverge. An implication is that ‘more visible attributes have the potential for reflecting a wider range of processes and constraints’ (p.248). An awareness of these levels of visibility and their implications thus may enable ‘the researcher to choose an initial set of formal variables that are most likely to be relevant to and useful in measuring one or a few behavioural or other processes or constraints that are of interest’ (p. 172).

Overall, I would recommend this book to the specialist, rather than to the undergraduate, because a knowledge of earlier work on style is important if one wants to get full value. Style, Society, and Person also contains much repetition that could easily have been avoided, and yet I finished the book thinking it was over-edited. In addition to the numerous chapters by the editors, we also get an editorial Preface, introductions to each Part (which summarise in considerable detail the various chapters to follow), a concluding editorial, and editors’ footnotes in many of the other chapters (these are usually placed in strategic places to support the editors’ own ideas). And last but not least, this long book (455 pages of text) is printed in what appears to be 9 point Times Roman font on fairly large pages – the small font combining with what is at times a dense writing style. This all adds up to make reading this book quite a chore. It is a pity that the messages of this book are at times diluted in unnecessary critique (at times bordering on criticism), repetition, and a somewhat ‘mechanical’ and positivist language, for it has much to say on style and on the social determinants and contexts of stylistic expression.

David, B.
Review of ‘Style, Society and Person: Archaeological and ethnological perspectives’ edited by Christopher Carr and Jill E. Neitzel.
December 1997
45
65–66
Book Reviews
Download
You must be a member to download the attachment ( Login / Sign up )