Review of ‘Shamans, Sorcerers and Saints: A Prehistory of Religion’ by Brian Hayden 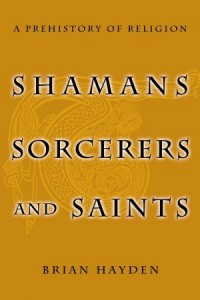 The idea of this book developed from a university course on the prehistory of religion run by the author over a number of years. Its main emphasis examines ‘traditional’ religions; that is, those that are transmitted orally or experientially rather than ‘book’ religions such as Christianity, Judaism or Islam. Hayden’s theoretical perspective explicitly employs cultural ecology to explain why religion developed and how it continues to evolve today. In this context, belief emerged as an evolutionary mechanism that enabled humans to cope with the stress and crises experienced by our early human ancestors. To quote the author:

The general premise of this book is that basic religious behaviours of the past and present have been shaped by two factors: ecology and an innate emotional foundation in humans that distinguishes us from other animals. This emotional foundation specifically consists of the ability to enter into ecstatic states via a number of techniques and to create strong, emotionally binding relationships with other people (or institutions or ideals) associated with those states. These factors become crucial in understanding the origins of the human penchant for religious experiences (p.3).

To some extent what makes this book unique is its attempt to look at some of the fundamental underpinnings of ‘belief’ common to us all, from an archaeological perspective; indeed it is the use of the archaeological evidence for religious practice that is the strongest component of the book. This evidence is most strongly presented in Chapter 4 in a review of the evidence for Neanderthal ritual in southern France, in which a convincing case is put forward for complex ritual capacity in pre-modern human populations. Although providing strong evidence for the presence of belief systems in early prehistory, Hayden’s emphasis on the universal role of states of altered consciousness (such as shamanism) as fundamental to early belief systems is less convincingly demonstrated. Indeed, one of the problems with the book is when Hayden departs from the archaeological data/evidence into descriptions of religious practices such as shamanism based on contemporary or historical examples.

Clearly when dealing with a ‘prehistory’ of a cognitive process such as belief, the use of the ethnographic record in proper context can provide valuable insight into how people in the past may have structured their belief systems. However, there are major problems with equating contemporary Indigenous belief systems with those of the deep past. These problems are further compounded when such analogies are applied to peoples on different continents, as seems to be the case when comparing archaic human religious practices with contemporary human practices. For instance, in the ‘Primal Palaeolithic’ chapter, Hayden uses a contemporary description of Aboriginal Australian ceremony as being analogous to ‘rituals from the very dawn of humanity’ (p.88). This description is accompanied by two photographs of Arunta Aboriginal men partaking in ceremony. Hayden goes on to state that:

Ethnographic observations among hunter-gatherers and other traditional groups provide archaeologists with some inkling of what ritual life may have been like in the distant past. If the ecological conditions and adaptations of the present and past groups are relatively similar, reasonably persuasive arguments can be made that the ritual life of the past may have been similar to the present (p.89).

This temporal and spatial conflation of behaviour is to some extent compatible within a cultural ecological framework because if hunters and gatherers live in a particular environment they will have similar cultural adaptations – time and place are subordinate to ecological conditions. There is little place within this framework for the idea of cultural practice as an internally driven ‘independent system of ideas’ (p.14) specific to place and time. Unfortunately the portrayal of contemporary hunter-gatherer societies in this way also evokes the image of contemporary Aboriginal people as living fossils; the living template of stone-age Europeans. Or as nineteenth century unilineal evolutionary theorists such as Lubbock state, that observations of the life of these ‘miserable savages’ (p.63) would ‘throw light on the ancient remains found in Europe, and on the condition of the early races which inhabited our continent’ (Lubbock 1865:336-337, 354, cited in McNiven and Russell 2005:63).

This book attempts a difficult task in presenting a world prehistory of religion and is unique in its approach and scope on this topic. It is beautifully published and lavishly illustrated, and in spite of some of the issues outlined above, the detailed presentation of the archaeological correlates relating to belief makes this a worthwhile purchase for anyone teaching a subject on early religion. Whether you agree with the interpretation of the evidence or the rather hardline theoretical approach adopted, is perhaps secondary to its value as a source book on this somewhat neglected area of archaeology.

Review of ‘Shamans, Sorcerers and Saints: A Prehistory of Religion’ by Brian Hayden
Bryce Barker
June 2007
64
53
Book Reviews
You must be a member to download the attachment ( Login / Sign up )