Review of ‘Rock Art of the Dreamtime: Images of Ancient Australia’ by Josephine Flood 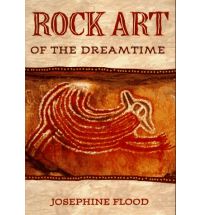 Archaeology today faces the considerable challenge of demonstrating its relevance to Australian society and culture. If the discipline falls short in this endeavour the pessimistic forecast is for the continued diminishment of research funding, a condition that could spell the demise of archaeology as an academic discipline in Australia. In a just world, a publication such as Rock Art of the Dreamtime might help rescue Australian archaeology from an insecure future.

Rock Art of the Dreamtime begins by introducing the reader to the Aboriginal inhabitants whose ancestors produced the rock art. The reader is taken on a trip detailing the chronological progression of rock art in Australia, and along the way encounters the various obstacles researchers have had to overcome in finding, recording, and interpreting the imagery. Flood has skillfully included the reader in this odyssey and has provided a glimpse of the answers to questions such as ‘what is art?’, ‘how is art dated?’, and ‘how is art classified?’

At all times Rock Art of the Dreamtime has maintained a balanced and well-informed viewpoint, although occasionally I found this to be an annoyance which hindered my reading enjoyment. Flood’s treatment of the controversy between Bednarik and Hallam over the Orchestra Shell Cave markings is an example of an overly even-handed treatment – were the marks produced by animals or humans? The author presents the evidence, reveals what other rock art researchers believe, and ends by stating that both viewpoints are correct. One is left with the feeling that Flood does not wish this work to be controversial.

This latest of Josephine Flood’s works focuses on an archaeological heritage of which Australians should be justly proud – its world-important Aboriginal rock art. The subject has proven to have a wide appeal, not only to the Aboriginal custodians, the avocational rock art enthusiasts, and the academic archaeologists, but also to the general public. Rock Art of the Dreamtime, with its numerous photographs, maps and illustrations, should satisfy even the most discerning in the audience.

The difficulty of writing a book targeted for an academic audience as well as the general public has been surmounted for the most part. The style is fluid and friendly, and occasional personal recollections by Flood provide the reader with a sense of familiarity with the author. For the non-academic, however, this comfortable feeling can quickly change to frustration with the archaeological jargon that peppers the text. A well-referenced and easy-to-read glossary has been provided, and in most cases will assist the unschooled readers to overcome their frustrations with the terminology. It would have helped to dispell the non- academic reader’s anxiety and confusion even more, however, if site names were always written in full and not abbreviated according to archaeological convention – e.g. OSC for Orchestra Shell Cave.

Rock Art of the Dreamtime is no dry commentary on the rock art of Australia. Archaeological as well as issues of public importance are woven into the text, including the impact of the environment upon Aboriginal society, the association of tools with art, and theories of Aboriginal dispersal across Australia. Rock Art of the Dreamtime will appeal to the rock art enthusiast, and to anyone who desires a comprehensive and authoritative book about Australia’s Aboriginal past. Flood’s book is a sign that Australian archaeology is relevant to the social and cultural identity of both indigenous and non-indigenous Australians.

Thomas, A.
Review of ‘Rock Art of the Dreamtime: Images of Ancient Australia’ by Josephine Flood
December 1997
76
76
Book Reviews
Download
You must be a member to download the attachment ( Login / Sign up )