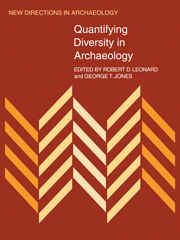 I struggled for some time to find a way to intrigue readers enough to consider reading this book. There isn’t any. This book is not for Australian archaeology, now nor in the foreseeable future. It covers themes that go against a historical train of thought in this country. At the business end of what is a theoretically coherent book, it assumes something actively discouraged in our discipline numeracy.

Intrigued? The book is a collection of thoughts and work on diversity, grounded in the richness of information theory and focused on the past. Many of the authors trace their intellectual genealogy to ecology rather than information theory, reflecting the relationship of archaeology to cultural ecology and evolutionary epistemology in America, from where all the authors hail.

The volume is logically set out and shows commonalty of purpose and extremely good editing. The openers introduce diversity from its ecological (Bobrowsky and Ball) and evolutionary (Rindos) bases. These set the stage for the following chapters and apart from historical overviews, concentrate on the many measures of diversity in which the authors bring out the range of diversity studies and theoretical underpinnings.

The tail end pair of Cowgill and Dunnell, perhaps paying some lip service to a post-modern age, separately provide commentary on the volume, inviting the reviewer to comment on their comments. Cowgill engages a detailed criticism of some chapters while trying to summarise diversity as richness, evenness, range and standardisation and its application to diet, raw materials, style and activities. Dunnell addresses archaeology as a borrowing discipline and the unease of applying a quantitative and explicit framework to a primitive notion of diversity that has existed in archaeology for decades. Both authors discuss the uses of diversity and sampling considerations.

In the way it proposes to look at data and in unifying archaeological notions of model building, this book is a landmark. Even though much of the writing may seem endlessly methodological, it is a book written to be used, applied to data and thought about. The outstanding contributions of Rindos and Conkey are best read as detailed pieces in their respective theoretical ontogenies. Rindos’ chapter is well placed in the volume, as it is a closely reasoned explanation of selection processes and diversity in an archaeological context.

While not ignoring (pre)historical reconstruction, most of the authors address comparison in a regional or analytical frame that is increasingly a dominant theme in Australia; for instance current research in Tasmania, central Australia or the River Murray, and in recent works such as Frankel (1991) and Witter (1992). The earlier use of diversity statistics by Vanderwal and Horton (1984) on Tasmanian data perhaps reflected their American and ecological influences.

Diversity is a way of measuring variation. Archaeology, as much as biology, entails the study of variation. The analysis of variation is approached through diversity, which can be thought of as a model bound method (Relethford and Lees 1982; Pardoe 1991). Model bound methods are used to examine models of population structure (and populations might be technological, economic or biological) and so allow us to test expectations. Model free methods, on the other hand assess the amount of difference between objects and seek patterns to observable variation.

An example of diversity studies, and one not mentioned in this volume is the work of Lewontin (1972) and Latter (1980) on the apportionment of human diversity. Their studies independently asked how much biological variation there is in humans and how it is structured. The finding of 80% within populations, 15% between populations and within regions, and 5% between continental regions was counter intuitive. Of more relevance however, it has set the stage for other analyses of variation. Following my earlier work on exclusion/inclusion as a concept unifying gene flow and social organisation, I have been working on apportionment of diversity in Australia. Preliminary results indicate that a pattern results much like that for the whole species. Most diversity is within populations. However two regions, the River Murray and the Top End of the Northern Territory, stand out with significantly higher diversity within regions. Diversity is caused, it does not just happen. In the case of biological diversity, I favour explanations of a social nature that are embodied in the concept of exclusion, which promotes diversity. Thus, we may look for causes of the patterns of diversity, going beyond model free analyses that look for pattern or differentiation. That is the heart of model bound methods, and it is the direction of this book.

This volume and the works of Lewontin and Latter taken together point to a unity of archaeological studies, be they stone tools, food resources, spatial structure, or biology of human bones. As the introduction and many authors stress, much of what we do is measure variation, and diversity is one tool to simplify comparison and, perhaps like Lewontin and Latter, show when intuition is not enough.

Buy the book at your peril. The ideas are demanding. The examples and data, as in any edited volume, are disparate but overall have relevance to every aspect of archaeology. The arithmetic may very well put off people, since a sublime simplicity of ‘diversity’ comes about only through detailed analysis of archaeology’s difficult and fragmentary data sources.

Perhaps if we realise that we all use numbers anyway, then the strength of this volume could be seen as a way toward simplifying analysis and ordering our thoughts. Archaeology is not about numbers, but that does not mean we should not use and interpret them.

Latter. B.D.H. 19RO Genetic differences within and between populations of the major human subgroups. The American Naturalist 116:220-37.

Relethford. J.H. and F.C. Lees 1982 The use of quantitative traits in the study of human population structure. Yearbuok of Physical Anthropology 25: 113-32.

Pardoe, C.
Review of 'Quantifying Diversity in Archaeology’ edited by Robert D. Leonard and George T. Jones
December 1992
35
72–73
Book Reviews
You must be a member to download the attachment ( Login / Sign up )