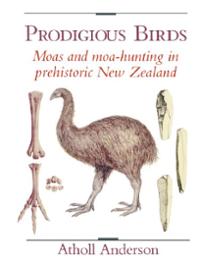 Prodigious Birds compiles and extends Anderson’s earlier pieces on New Zealand prehistoric archaeology and the role of moas. The introduction summarises his research topics as eight major and seemingly easy questions. If you only want his short answers to ‘how many moas were there?’ and ‘ who were the moa-hunters?’ then you need only read the first eight pages and perhaps the conclusion. However, the real interest is the structure of Anderson’s investigations and the contents of his arguments, the implications of which go far beyond the shores of New Zealand. The book is divided into two parts of roughly equal length. The first ‘Discovery and Biology of the Moas’, is presented in five chapters. It begins with a detailed account of the scientific discovery of moas in the first half of the 19th century.  Here, Anderson shows how this was ‘no single event’ but a combination of scientific pursuit, serendipity and misunderstanding, involving no less than four major players, including Owen, who monopolised moa studies for forty years.

The voluminous literature on moa classification is reviewed and Anderson documents the changing importance of non-metrical and metrical taxonomic criteria. Thankfully, the progressive changes in family membership, genera and species numbers are made easier to follow with an appendix, ‘Taxonomies of Dinomithiformes’. Anderson’s history also discusses the theory underlying the various classificatory styles such as Cuverian Naturphilosophie. As intended, this reader was left with a very uneasy feeling about the science behind the systematics of moas in particular and of vertebrates generally.

The territory becomes more familiar or perhaps easier to traverse with discussions on moa palaeogeography. In these sections Anderson reveals the disparities in the timing of ratite divergences between phylogenetic sequences according to primitive characteristics or biochemical and molecular DNA analysis and continental separation. He convincingly argues that geotectonic variance does not fully account for ratite dispersal and that volancy was probably an important mechanism. Flightlessness is discussed more generally as an adaptive strategy of birds in Pacific environments where diets are primarily herbivorous and terrestrial predators are very thin on the ground.

Reviewing natural sites and moa ecology, Anderson attempts to correlate fossil sites and their represented species with past climatic and vegetational patterns. As this is arguably the purpose or endpoint of the preceding compilation it is of interest that it is one of the shortest sections, in spite of what appears to be one of the better fossil records of any group of vertebrates in the world.

Excluding chapters on Moa discovery and Maori traditions, the first half of the book is not for the fainthearted or the phylogenetically weak. Its detail (read authority) would impress vertebrate taxonomists and palaeontologists alike, particularly those interested in the evolution of ratites. It would test the patience of most Australian archaeologists however, even those of us who for inspiration tackle the biological literature on human prey animals. If nothing else, these chapters demonstrate the enormous information loss which accompanies species extinction, regardless of how recently this occurred or the quality of the faunal record.

The second part of the book, ‘Moa-hunting, Processing and Extinction’, is presented as seven chapters. It opens with the issue of the depositional association between moa bone and material culture. This develops into questions of chronology, the nature of colonisation, and eventually the ‘Transactions dispute’. Central to this discussion are Haast’s interpretations of a stratigraphic disconformity between moa bone and marine shell beds in terms of pre-Maori people (who used crude implements to hunt) and the Neolithic (Maori) people (polished stone tools, nephrite and cannibalism). We see how Haast’s ideas change in the face of new data, particularly from Moabone Point Cave.

The next three chapters (8-10) review recent archaeological evidence, broken down regionally according to the North Island sites, South Island coastal sites and South Island inland sites. Along with a listing of the main deposits, Anderson discusses issues ranging from the association of subfossil (natural) moa bone with cultural items in the north to the behavioural implications of site organisation (ovens, huts and butchery areas) and the differential distribution of moa body parts. The east coast of the South Island was the major focus of moa hunting. Of the South Island inland sites Hawksburn (naturally enough) is reviewed in some detail. For this assemblage Anderson proposes a processing sequence and how it has been obscured through site formation; calculates moa MNI’s, infers how kills were returned to the site and provides various ratios of moa ‘product’ according to different body parts.

Overall, there appears to be little detailed (or standardised) information on moa assemblages upon which inter-site comparisons can be securely made. Much of the physical evidence of moa-hunting was collected last century when excavation methods were less precise and the collection of moa bone highly selective.

Hawksburn shows what Anderson would have liked to know about other moa deposits and his discussion appears to be obstructed in places because of a dearth of quality data.

The taxonomic detail of the first half of the book becomes important with Anderson’s attempts to better define which species were common prey and the reasons why.

The chapter on processing technology looks at the distribution of artefact types (ulus and teshoas), raw material acquisition, flaked tools and the southern blade industry. Again Anderson relies heavily on analyses of the Hawksburn lithic material which include use-damage, artefact size, retouch and edge angles. He argues that moa butchery was ‘heavy work’ requiring tools with ‘robust edges’, and this may account for the large quantity of broken blades. Although a functional relationship between blades and moa assemblages has not yet been demonstrated, Anderson believes that this artefact is in some way directly associated with moa-hunting.

In ‘Chronology and Extinction’ Anderson attempts to better define the ‘when’ of moa-hunting and ‘why’ of moa extinction. Radiocarbon dates suggest that moa hunting varied regionally but was most intensive between 500 and 800 BP. In determining the time of extinction, Anderson discusses Maori accounts, the nature of the surface record and most importantly, the archaeological evidence which suggests a later extinction period of between 400 and 500 BP.

The discussion on the causality of extinction begins with a model of the relationship of consumers and moa numbers at three different levels of annual consumption. He attempts to quantify the overkill hypothesis, which leads to estimates of standing crops, culling and consumption rates. Although there is considerable discrepancy between ‘observed and expected rates of moa consumption’ (due to the incomplete nature of the moa record) he concludes that overkill is a ‘feasible hypothesis’ and looks at the various options – blitzkrieg, rolling waves and serial overkill. Features of the predator-prey relationship which ‘encouraged overexploitation’ were that moas were maladapted to a large terrestrial carnivore; the absence of alternative prey species; the non-selective behaviour of the hunters; ‘topographical fragmentation’ and the difficulty of recolonisation. Other causes of moa extinction such as the effects of disease, dogs, rats and habitat destruction are also discussed. Anderson is not committed to a single cause but favours serial exploitation of geographically separate moa populations in tandem with habitat destruction.

Throughout this book Anderson demonstrates the complexities of answering so-called simple questions. In doing so, his research is bold in its scope and blatantly ignores the conventional boundaries between archaeology, palaeontology and the biological sciences. Nor is it beyond Anderson to suggest solutions to problems traditionally seen as the stuff of other (non-archaeological) disciplines. He has produced a remarkably solid synthesis of past and present knowledge of moa biology and archaeology. The book will serve not only as an invaluable reference of New Zealand prehistoric archaeology, but as a guide for those who investigate the archaeology of other types of vertebrate prey, be it extinct or extant. I can only highly recommend it.

Brendan Marshall
Review of 'Prodigious Birds. Moas and Moa-hunting in prehistoric New Zealand’ by Atholl Anderson
June 1994
38
66–68
Book Reviews
You must be a member to download the attachment ( Login / Sign up )