Review of ’Prehistoric Marine Resource Use in the Indo-Pacific Regions’ edited by Rintaro Ono, Alex Morrison and David Addison 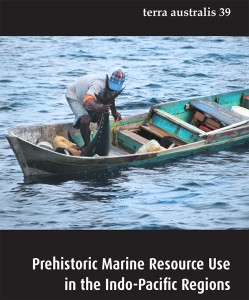 Department of Archaeology and Natural History, College of Asia  and the Pacific, The Australian National University, Canberra ACT  0200, Australia <mirani.litster@anu.edu.au>

Discussions surrounding  human impacts on  marine ecosystems  have often been limited  to the post-industrial  era, when changing  technologies enabled the  large-scale acquisition of  marine resources. The  archaeological discipline,  with its capacity to  examine trends to a  greater time-depth,  provides older evidence  for such discussions. Archaeological studies into marine  resources also provide information about cultural uses of  such resources beyond known contemporary and historical  examples, whilst ethno-ecological studies deliver insight  into contemporary exploitations.

The recent addition to the Terra Australis series, entitled Prehistoric Marine Resource Use in the Indo-Pacific Regions, examines such exploitations across the Indo-  Pacific region within a human ecology framework. This  regional focus extends from the North Pacific (San Miguel  Island), to insular South East Asia and east Africa (the Mafia Archipelago). Edited by Ono, Morrison and Addison, nine of the 11 contributions derive from a conference session  entitled ‘Historical Ecology and Marine Resource use in the Indo-Pacific Region’, held at the 19th Indo-Pacific Prehistory Association Congress in Hanoi, Vietnam, in 2009. The volume is divided into four sections, partitioned largely according to  temporal case studies and thematic categories, and within  each section a range of methodological and analytical issues  are presented.

The first section of this volume contains five contributions  detailing prehistoric and historical marine resource use.  Chapter One by Olmo discusses the analysis of fish bones  from middens in Guam. He highlights issues associated with  the lack of information below family level and concludes by  suggesting that the use of modern fisheries data may resolve some of these problems. The second chapter by Amesbury  discusses pelagic fishing in the Marianas, from the period of initial colonisation through to recent times. Amesbury  points out that the initial colonisers were skilled at acquiring  open-ocean species, which is supported by archaeological remains of dolphinfish (Coryphaena hippurus) and  marlin found in prehistoric period contexts. Amesbury then  discusses recent changes in Chamorro fishing practices,  including a brief hiatus in pelagic fishing during the  18th century Spanish period, and the introduction of more  boats in the 1950s which enabled the Chamorro to reinstate  open-ocean fishing practices. The third chapter, authored  by Ono and Addison, examines the archaeological record of  Tokelau, specifically the presence of marine resources dating  from initial colonisation. They discuss the contemporary  and prehistoric sourcing of both inshore and pelagic fish  species, with archaeological results used in concert with the  ethno-ecological record to highlight the possibility of longstanding  marine conservation measures. With a focus on  San Miguel Island, the fourth offering from Braje, Erlandson  and Rick examines historical maritime resource use in the  North Pacific. Through a comparison of datasets ranging  from the early Holocene through to contemporary times,  the authors propose that an apparent abundance and size  increase of red abalone (Haliotis rufescens) was attained  through human predation on local sea otter populations.  This information provides important insights into human impact and is the basis for the authors suggesting that  abalone fisheries would be sustainable with both a recovered red abalone population and a controlled sea otter population.  The final paper in the opening section, authored by  Christie, is the only contribution addressing Indian Ocean marine resource extraction. Christie discusses maritime exploitation and its social context on the east African  coast during the 12th–18th centuries by examining faunal  assemblages from Juani Island. She suggests that status was a causal factor in differential patterns of archaeological  faunal remains; areas associated with lower status groups revealed a relatively higher presence of marine fauna when compared to higher status areas, suggesting that low status  groups supplemented their diet through marine resource  procurement. Christie concludes by arguing that the  social context of maritime exploitation can be better  understood through the examination of faunal remains within spatial frameworks.

Case studies associated with specific marine resource use  are presented within the second section of the volume. The  presence and significance of baler shell (Melo sp.) at Neolithic and metal age sites in the Philippines is examined by Vitales.  Baler shells have been extensively exploited throughout the  Indo-Pacific, including Australia, but the ‘richest’ evidence  for their use emerges from the Philippines, with 30 recorded  sites yielding Melo sp. remains. Vitales concludes that these  shells were selectively exploited during the Neolithic and  Metal Ages for artefact production, often for ‘scoop forms’  of objects. Such shells have also been found in many burial  contexts, highlighting their social significance. The next  chapter by Osamu presents a cultural history of dolphinfish  fishing in Japan, east Asia and the Pacific. Osamu highlights that Japanese exploitation appears to be the oldest at 11,000 years BP, with dolphinfish remains also having been found  in later archaeological deposits in Guam, Taiwan and the Philippines. The paper examines shifts in dolphinfish consumption patterns, indicating how it has more recently acquired a lower prestige status, despite a high social  significance during the Edo Period.

The third section presents two discussions of material culture associated with marine exploitation in the western  Pacific. The first, by Goto, examines a ‘hybridised marine  exploitation culture’ in the Bonin and Hachijo-jima Islands.  Goto presents several examples, including the use of the  single outrigger canoe which was introduced to the Bonin  from Hawaii in the 19th century. He examines a range of modifications, including hull building, which eventually  incorporated Japanese cedar and boat-nails. He concludes  by stating that these examples of ‘technological integration’  are not a result of diffusion, but of agency. This paper is paired with an ethno-ecological study conducted in the  Mactan Islands, Philippines, by Tsuji, who examines the ecological and environmental impacts of moray eel capture  through the use of bamboo basket traps (bantak). Tsuji  concludes that further work is required documenting details  on fishermen’s strategies for trapping grounds, as well as a greater focus on the management of moray supply.

The edited volume closes with contributions discussing  modern marine resource use. Suda presents changing  subsistence activities in Oceania following the arrival of  Europeans, and highlights the impact of modernisation  and globalisation resulting in a focus on commercial  fishing in lieu of traditional subsistence fishing in Ha’ano  village, Tonga. Suda argues that, despite impacts not being  noticeable thus far, attention must be paid to the possible  deleterious outcomes of resources shifting beyond the  immediate village area. Segi presents the final paper,  exploring territoriality over traditional fishing areas on Cebu  Island in the Philippines. He highlights the importance of  further research into informal territoriality over designated  fishing grounds and emphasises the deployment of feasible and sustainable strategies of co-management between  authorities and fishermen.

The editors of this volume were faced with the challenge of connecting a set of topically wide ranging case studies  within a geographically expansive region. The papers present  varied data sets from prehistoric, historical and modern  contexts, and the chronological and thematic organisation  of these case studies provides clarity and cohesion. Owing to  the wide scope of material, however, the volume has underrepresented  certain geographical areas, such as the Indian  Ocean, with a disproportionate focus on island South East  Asia and the Pacific. Additionally, despite a well-established  practice of mollusc procurement and use in the region, a  focus on vertebrate marine fauna is pronounced, with only  two studies specifically dealing with shell. To my mind, the  stand out papers are those by Christie, who examines status  and differential resource patterning in the archaeological  record in east Africa and Braje et al.’s examination of red  abalone, sea otters and kelp forest ecosystems. This paper  effectively illustrates the significant role that archaeology  can play in providing insight into future sustainability plans.

In summary, Prehistoric Marine Resource Use in the Indo-Pacific Regions offers readers a range of data associated  with marine resource use in the Indo-Pacific from varied  temporal contexts. The volume is successful in highlighting  the relevance of a human ecology framework and the use  of different methodological approaches to gain insight into  past and present marine resource use and management.

Litster, M.
Review of ’Prehistoric Marine Resource Use in the Indo-Pacific Regions’ edited by Rintaro Ono, Alex Morrison and David Addison
June 2014
78
125-126
Book Reviews
Download
You must be a member to download the attachment ( Login / Sign up )