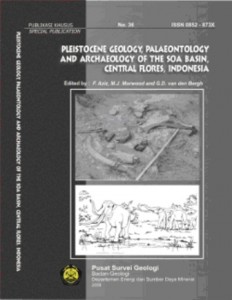 This special publication presents collaborative research between Indonesian and Australian researchers on the Soa Basin of Central Flores, Indonesia. While the co-existence of Middle Pleistocene extinct vertebrates and stone tools has already been published (i.e. Morwood et al. 1998), this edited volume includes eight succinct papers providing detailed accounts of the geology, palaeontology and archaeology of the Soa Basin. This has important implications for the history of faunal (including hominid) dispersal, evolution and replacement on Flores, and more generally in Southeast Asia.

The volume begins with a general introduction by Aziz and Morwood to the Soa Basin, including a history of research in the region, which is supplemented by photographs of Verhoeven’s original excavations at Mata Menge and Boa Lesa from the 1960s. In 1967 Verhoeven recovered extinct Stegodon remains and stone artefacts from the same horizon at Boa Lesa, concluding that early hominids and large mammals co-existed on Flores approximately 750,000 years ago. This implied that hominids were able to reach the island during the Middle Pleistocene, however, this evidence was largely ignored by the archaeological community. It was not until the early 1980s, that Fachroel Aziz and Paul Sondaar decided to re-excavate Mata Menge to investigate Verhoeven’s theory. There is now, of course, even more interest in the Middle Pleistocene localities and the arrival of the earliest hominin in the region since the discovery of the late Pleistocene hominid Homo floresiensis at Liang Bua on Flores (Morwood et al. 2004).

The second chapter by Suminto, Morwood et al. presents an overview of the general geology, depositional history, chronology and palaeoenvironmental interpretation of the Soa Basin, and its fossil localities, providing an excellent foundation for the rest of the volume. It is within the 1 million to 650,000 year old Ola Bula Formation that some 16 fossil sites (most also containing stone tools) have been recorded; four of these localities are discussed in detail in later chapters in the volume, while all 16 are briefly listed and described here. Most of the fossil sites are localised accumulations in palaeochannels deposited during times of low lake levels, but some are also associated with palaeoshorelines. The entire Soa Basin has been mapped at a scale of 1:50,000 allowing detailed interpretation of its geological history and highlighting deposits potentially suitable for radiometric dating. The chapter is supplemented by a fold-out geological map.

Chapters 3–6 describe excavations at the sites of Tangi Talo, Mata Menge, Boa Lesa and Kobatuwa, all situated in central Flores. Tangi Talo is the oldest fossil locality in the Soa Basin with a fission-track date of 900,000±70,000 BP, first reported by Morwood et al. (1998). In Chapter 3, by Aziz, van den Bergh et al. the results from the 1999 excavations are described. It is thought that the deposits accumulated shortly after a massive volcanic explosion at c.900,000 BP. So far, Tangi Talo is the only site on Flores that has yielded remains of the pygmy Stegodon sondaari and the giant tortoise Colossochelys sp. Also recorded is the Komodo dragon Varanus komodoensis which is found in other later Middle Pleistocene sites in the Soa Basin, and is still extant today on Flores and nearby islands. Taphonomic analysis and S. sondaari age mortality profiles at Tangi Talo indicate that the assemblage was the result of a catastrophic event affecting an entire population including prime-aged adults. It is at this time that there is an overall faunal shift on Flores, with the endemic S. sondaari and the giant tortoise disappearing; being replaced by the larger-bodied Stegodon florensis, Komodo dragon, crocodiles, rat and bird. However, the authors also allude to the possibility that the arrival of hominids sometime close to this event may also have been a contributing factor, although there is no evidence of hominin activity at Tangi Talo.

At Mata Menge, discussed in Chapter 4 by van den Bergh, Aziz, et al., palaeoenvironmental reconstructions are developed using sedimentological and taphonomic evidence provided by recent excavations between 2004 and 2006. Several fission-track dates indicate a minimum age for the fossils and the stratigraphically contemporaneous stone artefacts at 800,000±70,000 BP. This age also signals the first appearance of hominins on Flores, and indeed this part of Southeast Asia. It is at Mata Menge that the emergence of a new faunal suite not previously recorded on Flores occurs. It is dominated by the endemic S. florensis (a common taxon in other similar aged Middle Pleistocene sites in the Soa Basin), giant rat Hooijeromys nusatenggara, crocodile, and bird. While some 169 S. florensis bones have now been recorded from Mata Menge, representing a Minimum Number of Individuals (MNI) of 13, there is no evidence of hominin activity relating to their accumulation such as butchery or bone breakage. However, the age structure of the large mammals suggests a different scenario than that at Tangi Talo, indicating that the accumulation was not the result of a catastrophic mass death, nor was it selective mortality associated with mammalian carnivore predation. The stone tools from Tangi Talo imply that the former lakeshore was used for the production of stone artefacts by hominids; with retouch and use-wear suggesting that they were more likely to have been used in wood-working activities rather than in Stegodon butchery.

Another site originally excavated by Verhoeven in 1963, Boa Lesa, is outlined in Chapter 5 by Morwood, Aziz et al. This chapter discusses more recent excavations between 1998 and 1999. It is almost contemporaneous to the nearby site of Mata Menge given its relative altitude and stratigraphic position; this being confirmed with fission track dates of 840,000±70,000 BP. Several S. florensis bones were found in stratigraphic association with six stone artefacts in a low energy fluvial channel, at its junction with a smaller tributary. It appeared that most of the bones and artefacts had not been transported over long distances. Similar to the skeletal material from Mata Menge, the S. florensis bones at Boa Lesa did not show any evidence of hominin modification.

The last excavation discussed (Chapter 6 by Jatmiko, van den Bergh et al.) from the Middle Pleistocene in the Soa Basin describes excavations between 2005 and 2007 at Kobatuwa. As with Mata Menge and Boa Lesa, stone tools have been recovered from the same stratigraphic horizon as extinct S. florensis bones. Fission track dating revealed that the site is younger, with a date of 800,000±90,000 BP 35cm below the deposit giving a maximum age, and 700,000±70,000 BP at 2m constraining the age of the horizon and providing a minimum age. The stone tools at Kobatuwa differ from those from Mata Menge and Boa Lesa as they are larger cores and flakes (greater than 5cm). The authors suggest that these differences correlate to the varying environments; specifically the available raw material and the potential for fluvial transport.

To evaluate the technological behaviour of Middle Pleistocene hominins in Southeast Asia, the stone tool technology at the oldest site in the Soa Basin, Mata Menge, is discussed in Chapter 7 by Brumm, Moore et al. This has important implications for understanding hominid behaviour and evolution in Indonesia and across Southeast Asia, previously considered to be ‘a region of long-term cultural stagnation’ (p.119, original emphasis). Results indicate that hominins in the Soa Basin selected and transported large flake blanks of >100mm of high-grade raw materials to Mata Menge, abandoning the larger cores where they acquired the raw material. Analysis suggests focus on the production of radial cores via bifacial and centripetal reduction of stone. This technology has also been associated with late Pleistocene H. floresiensis from Liang Cave on Flores. The prevalence and longevity of the radial core technology on Flores raises questions concerning its origins in Palaeolithic Southeast Asia; did it evolve and spread out of Africa with the ancestors of H. floresiensis or was it a regional convergent development within the region? Although the authors admit that stone tool research at Mata Menge is still in its preliminary stages, understanding the development of this tool technology is fundamental in establishing the Palaeolithic behaviour in the region and the origins of H. floresiensis.

A summary chapter by Morwood and Aziz concludes the volume where the outcomes are discussed in regards to their implications for the Middle Pleistocene and possible subsequent evolution of hominids on Flores. Evidence from recent work in the Soa Basin has complemented and extended the range of archaeological, palaeontological and stratigraphic evidence for the arrival of hominins on Flores, which approaches the timing of the extinction of the pygmy S. sondaari and the giant tortoise Colossochelys sp. between 900,000 and 880,000 BP. At this time there is a faunal turnover, with the large-bodied S. florensis, Komodo dragon V. komodoensis, crocodile, rat and bird the only fauna recorded from in the Soa Basin between 880,000 and 700,000 BP. While the change in fauna is associated with a major volcanic eruption, it is followed closely by the arrival of hominids in the Soa Basin c.880,000 BP. It is the larger bodied S. florensis which is the immediate ancestor to the late Pleistocene smaller subspecies S. f. insularis found in association with H. floresiensis. Between the Middle Pleistocene species turnover, and the later appearance of H. floresiensis on Flores during the late Pleistocene (c.95,000 BP), the fauna retained stability and phylogenetic continuity suggesting no new arrivals or extinctions of animals in the region until about 17,000 BP. At this time there was another faunal turnover at Liang Bua which interestingly, also coincided with a major volcanic eruption and subsequent arrival of a new hominin species (modern humans). The volume finishes with a discussion of the implications of the Middle Pleistocene research in the Soa Basin for understanding faunal (including hominin) dispersal, evolution and extinction on other islands in Southeast Asia.

Overall, this volume makes an important contribution to our understanding of Middle Pleistocene archaeology, palaeontology and geology of the Soa Basin and Southeast Asia through its excellent combination of papers. While some of the dates and other information had been previously published elsewhere, it is great to see the detailed excavation notes from four of the major sites, detailed geology including the supplementary fold-out map, important artefact analysis from Mata Menge, as well as the informative background and historical information combined in such a volume. It will be a valuable resource for those interested in the palaeoecology and palaeoenvironment of the Soa Basin during the Middle Pleistocene as well the migration, evolution and extinction of fauna, including hominids, on the islands of Southeast Asia.

Jillian Garvey
Review of ‘Pleistocene Geology, Palaeontology And Archaeology Of The Soa Basin, Central Flores, Indonesia’ edited by F. Aziz, M.J. Morwood and G.D. van den Bergh.
June 2011
72
52-54
Book Reviews
You must be a member to download the attachment ( Login / Sign up )